AeroVironment designed Puma to be controllable by the same ground control station used to operate its ubiquitous Raven small drones -- already in use by the Canadian defense forces. Canada's decision to add yet another tool from AeroVironment's toolkit to accompany its Ravens suggests this was a smart move, making it easier for customers to integrate additional AV products into their arsenals. It also suggests that AeroVironment's succeeding in continuing to grow its international business (where sales have quadrupled over the last two years, albeit off a small base) even as its sales to the U.S. military (down 28% over the same period) trail off.

And yet, while AeroVironment's contract win suggests that its strategy is succeeding, AeroVironment stock is actually down slightly since news of the Canadian contract was announced. 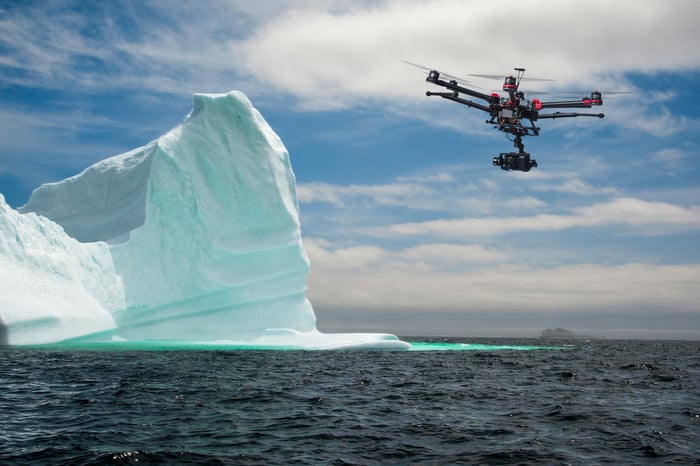 Weighing in at 14 pounds, with a 9.2-foot wingspan, the battery-powered Puma can fly for up to 12 miles  and stay aloft for more than three hours at a time. Equipped with AV's new Mantis i45 sensor, it can survey the field in daylight or at night, using infrared imagery around a full 360 degrees of vision -- and at up to 50 times magnification. And crucially for operating in a naval environment, where water landings may be necessary, Puma II AE is waterproof.

It looks like the right tool for the job Canada's Navy needs done -- but winning the contract doesn't seem to be doing AeroVironment's stock price any favors. If you ask me, the reason for that has to do with the way the contract was won.

As AeroVironment explained in its press release, its contract with the Canadian Navy was won as a "partner" to Canadian defense firm Maxar Technologies (NYSE:MAXR), the company formerly known as MDA. This was done not necessarily because that's how AV wanted to structure the contract, but in order "to satisfy the requirement of the Department of National Defence of Canada." This seems to imply that Canada insisted its contract be awarded to a Canadian bidder, even if that bidder brought a foreign partner as its plus-one.

Thus, no matter how many Pumas Canada is actually buying, and no matter how big a dollar value the contract is for, not all the money will be going to AeroVironment. AV will have to share the loot with Maxar.

Worse news for AeroVironment shareholders: there won't actually be a lot of loot to share. Even before AV made its announcement, you see, Maxar revealed  that Maxar itself had actually signed the contract with Canada's Department of National Defence -- making Maxar, not AV, the prime contractor. According to Maxar, moreover, the entire value of the contract is for a mere CA$8 million.

Long story short, the most AeroVironment can hope to get out of this contract is a fraction of a $6.2 million total award. ­Maybe enough to add up to 1% or so of AeroVironment's $300 million in annual sales, but almost certainly not enough to move the needle on the stock.

This simply isn't big news for AeroVironment -- and investors are treating it just like that.