British supercar maker Aston Martin announced that it will relaunch its historic Lagonda sedan brand as "the world's first zero emission luxury brand" -- and it unveiled a wild concept car that hints at what it has planned.

Yes, Aston Martin is privately held, but hang on: Aston's key investors are considering an initial public offering in the near future, possibly by the end of 2018. Given that old rival Ferrari's (NYSE:RACE) stock has more than doubled in price since its IPO in late 2015, an Aston Martin offering is likely to draw considerable interest from investors -- and it should.

If Aston does go public, the new Lagonda model range could sweeten the pot for investors and give it some advantages over Ferrari. Here's what we know. 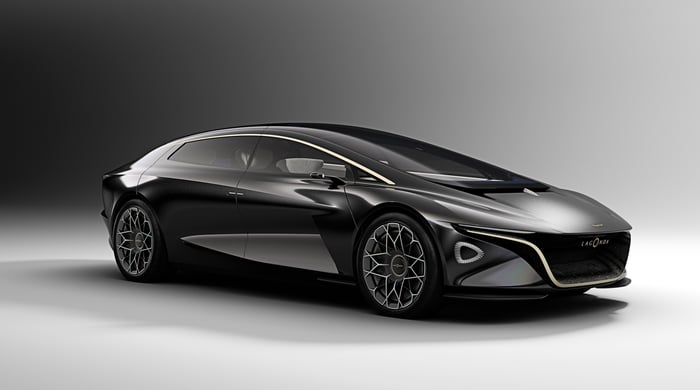 We believe people associate luxury in their cars with a certain traditional and even old-fashioned approach because, to date, that is all that's been available to them. Lagonda exists to challenge that thinking and prove that being modern and luxurious are not mutually exclusive concepts. -- Aston Martin CEO Andy Palmer

Simply put, the idea is that the new Lagonda brand's vehicles will combine advanced battery-electric and autonomous-vehicle technology with dramatic styling and luxury appointments to create something new: A super-luxury brand that isn't tied to the past.

The reinvention of Lagonda also neatly solves the problem facing a number of small-volume luxury makers: How to reconcile autonomous-vehicle technology with brands built around the idea of driving pleasure. Lagonda allows Aston to have its cake and eat it, too -- to offer a range of cutting-edge autonomous luxury sedans that is clearly separated from the Aston Martin brand itself, but also clearly related.

About the Lagonda Vision Concept

Generally speaking, "concept cars" (or show cars) come in two flavors. Sometimes, they're pure flights of fancy, intended to show the future direction of a brand. But they can also be a clear preview of something that the automaker actually plans to put into production.

The Lagonda Vision Concept that Aston unveiled in Geneva this week appears to be somewhere in between. It's clearly intended to preview the revived Lagonda brand's styling direction, but there might be more to it. It's probably best thought of as a first-draft take on the shape of a future Lagonda, with a far-future interior added for show. 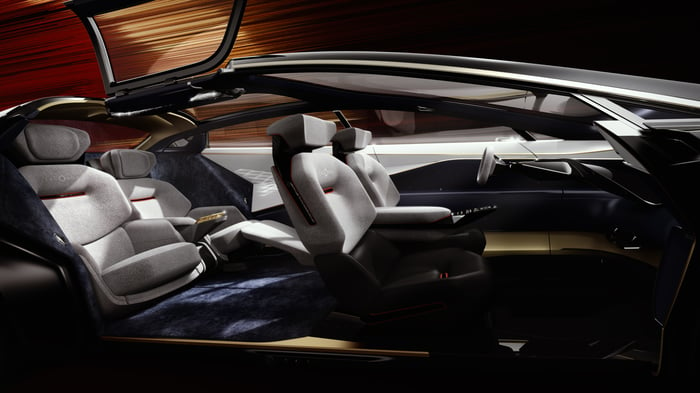 The electrification revolution means there is no longer any need for horse and carriage design, and our new concept shows the scope of design opportunities that open up once you no longer need to provide space for a large power source directly in front of the passenger compartment. In the Lagonda Vision Concept, the batteries occupy the floor of the car. Everything above that line belongs to us.

The car's exterior is dramatic, and that's the point: Part of the luxury proposition is that a Lagonda won't look like anything else. But it won't look old-fashioned, either: Palmer said that the goal is to create the world's first ultra-modern luxury cars.

Aston didn't offer any details as to the concept car's range or powertrain.

Yes and no. Tesla (NASDAQ:TSLA) describes its products as "premium electric vehicles." Lagonda will aim at more rarefied territory: Just as an Aston Martin represents a step up in price and exclusivity from, say, a Porsche, so will Lagonda offer a similar step up from Tesla.

But the example of Tesla was clearly a part of the thinking that went into Lagonda. To borrow Palmer's phrase, Teslas might be thought of as the first ultra-modern premium cars. I think Aston wants Lagonda to be like Tesla, in the sense of being a brand with cutting-edge technology that isn't bound to a pre-electric tradition -- but at significantly higher price points: To be the Tesla of high-end luxury cars.

What does Aston Martin know about electric vehicles?

More than you'd expect. The big thing to know is that before Palmer joined Aston Martin, he was Nissan's chief product-planning officer, where he was very involved in the launch of the original all-electric Leaf. Palmer has built a team at Aston that knows what it's doing: Expect these Lagondas to be competitive on technology with cars from start-ups like Lucid Motors -- and possibly well ahead on the luxury and manufacturing-quality fronts.

What is Lagonda, anyway?

The Lagonda brand may not be familiar to most Americans, but it has a long (if checkered) history dating back to 1899. Aston Martin's then-owner bought Lagonda in 1947 and combined the two brands into a single company, using a Lagonda-designed engine to power a new range of Aston Martins introduced in 1950. 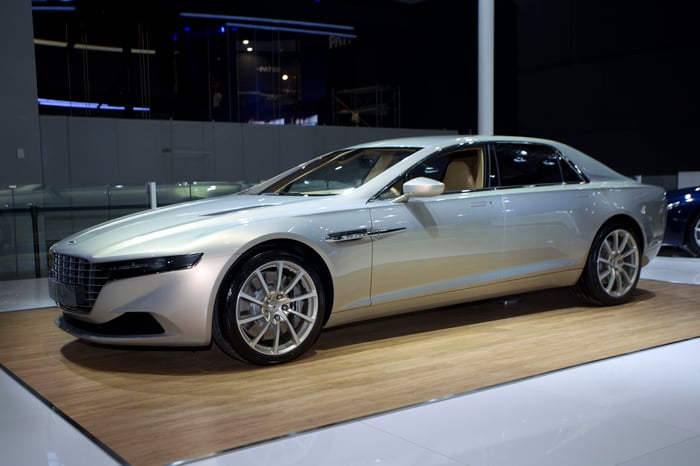 The most recent Lagonda was an ultra-luxury sedan called the Taraf. About 150 were built in 2015 and 2016. Image source: Aston Martin Lagonda Ltd.

Lagondas have been produced off and on since then, generally as luxury sedans that stand a bit apart from Aston's traditional high-performance coupes and convertibles. The most recent iteration was the Lagonda Taraf, a $1 million ultra-luxury sedan produced in a limited run in 2015 and 2016.

What will Lagonda do for those hypothetical Aston investors?

Should Aston Martin decide on an IPO, Lagonda will give it a couple of advantages:

Long story short: It's not yet clear whether Aston Martin will go public. But if it does, the relaunched Lagonda brand looks set to give its investment case a boost.