The banking industry has come a long way from the depths of the financial crisis. Over the last decade, banks have largely reduced their risks and eliminated expenses. Now, as interest rates rise, more of their profits are flowing to shareholders in dividends and repurchases, powering impressive returns for their investors.

But even as bank stocks surge, some banks still stick out as attractive values. Here's why three Motley Fool investors like Citigroup (NYSE:C), Morgan Stanley (NYSE:MS), and BB&T Corporation (NYSE:TFC) as some of the best bets in banking.

Sean Williams (Citigroup): Though Citigroup has long been the laggard of the biggest domestic banks by assets, I believe now is the time to consider adding this oft-questioned bank to your portfolio.

Citigroup's considerably higher exposure to foreign markets during the financial meltdown a decade ago relative to its peers, along with it leaning more heavily on short-term borrowing, are two big reasons why it's underperformed on a book-value basis. Citigroup is, essentially, the Rodney Dangerfield of the banking industry. But that could be changing.

Following the first notable correction in quite some time for stocks, Citigroup's international exposure and relative fundamental value stand out. According to its recently reported fourth-quarter results, Citigroup's global consumer banking (GCB) division, which comprises close to half of its aggregate revenue, had constant currency growth of 4%. Some $3.2 billion of the $8.4 billion in recorded sales for GCB came from international markets, with constant currency revenue growth of 7%. This includes 7% retail banking growth in Latin America, and 8% sales growth in Asia. This relatively large foreign exposure could come in handy for Citigroup as it'll help shield the bank from concerns about rising inflation in the United States.

What's more, Citigroup ended the fiscal year with a tangible book value (TBV) of $60.40, meaning it's only currently valued at approximately 1.2 times its TBV. Though not written in stone, banks are generally considered to be relatively cheap if valued near their TBV, and fairly valued when near two times TBV. This would suggest Citi potentially has more upside than its peers.

We also can't overlook what Citigroup has done to reward its shareholders. Last quarter alone it returned $6.3 billon to shareholders through share buybacks and dividends. As Citi's liquidity improves, so should its ability to boost its current yield of 1.7%. What was once among the riskiest money center banks now looks like a heck of a bargain to this investor. 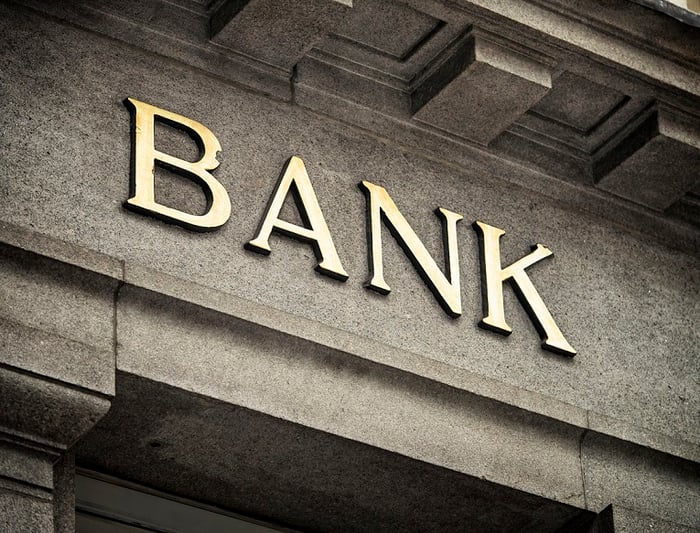 Dan Caplinger (Morgan Stanley): Many investors stick to the retail banking side of the industry when they look at major financial institutions. But even as the stock market has experienced heightened volatility so far in 2018, non-retail banking operations look poised to become increasingly important in the current environment.

Morgan Stanley has a long reputation for successfully tapping into available revenue from trading operations, and after seeing disappointing results in its fixed-income trading unit during the stock market's recent boom, investors can expect improving conditions now that the fixed-income market is back in play. Morgan Stanley has also done a better job than its peers in maintaining equity trading revenue levels.

The real success that Morgan Stanley has seen is in wealth management, where revenue and inflows have been on the rise. Investors want guidance when markets get turbulent, and Morgan Stanley is in prime position to capitalize on new customers with doubts about how to protect their hard-earned savings. Combined with a lower corporate tax rate thanks to tax reform measures and the potential to see investment banking-related advisory revenue climb as well, Morgan Stanley is a timely choice in an industry poised for big gains in the near future.

Buy this bank, then forget you own it

Jordan Wathen (BB&T Corporation): BB&T remains one of my favorite all-weather bank stocks. The company's treasure trove of fee-based business lines and historically sound underwriting make it a great bank stock to buy and hold for the long haul.

BB&T is less interest rate sensitive than most banks, due to the fact that it generates about 43% of its income from fee revenue derived from insurance, mortgage banking, and investment brokerage and trust businesses. These provide a baseline level of income that is resilient even in economic downturns, unlike lending, where profits fall precipitously when economic tides turn.

But make no mistake, BB&T isn't a bad lender propped up by non-interest income. During the Great Financial Crisis, net charge-offs peaked at 2.7% of average loans, and the bank remained profitable throughout the downturn. In the most recent quarter, net charge-offs stood at just 0.36% of loans on an annualized basis, reflective of its conservative underwriting culture.

Sure, BB&T isn't the kind of bank stock to knock the lights out with double-digit asset growth, but its prudent approach is what I like most about it. A focus on expense controls and sound underwriting should allow BB&T to earn double-digit returns on tangible equity for a very long time to come, making this a great bank stock to buy, hold, and ignore.