Since Skechers USA Inc. (NYSE:SKX) reported its 2017 third-quarter earnings last October, the stock has been on a tear. Like a coiled spring, the stock has appreciated more than 60% over the past year, with all of the gains coming since its blockbuster quarter five months ago, crushing the S&P 500 index in the interim.

When the company reported its fourth-quarter numbers, the stock's fundamentals continued to show strength. Sales grew to $970.6 million, a 27% year-over-year increase, and adjusted earnings per share rose to $0.21, an incredible 425% year-over-year increase -- though it should be noted a variety of factors hit 2016's fourth-quarter earnings. Better yet, Skechers' much-maligned margins finally showed long-promised improvements: Gross margin increased 20 basis points to 46.8%, and operating margin increased an even better 200 basis points to 5.7%. Here's a look at the company's full-year growth rates:

Yet after such blazing-hot growth, is the stock about to cool off? I don't think so. In fact, if this stock weren't already one of my largest individual positions, I would consider buying more. Let's look at three reasons I'm still bullish on the company, even after its astronomical rise this past year. 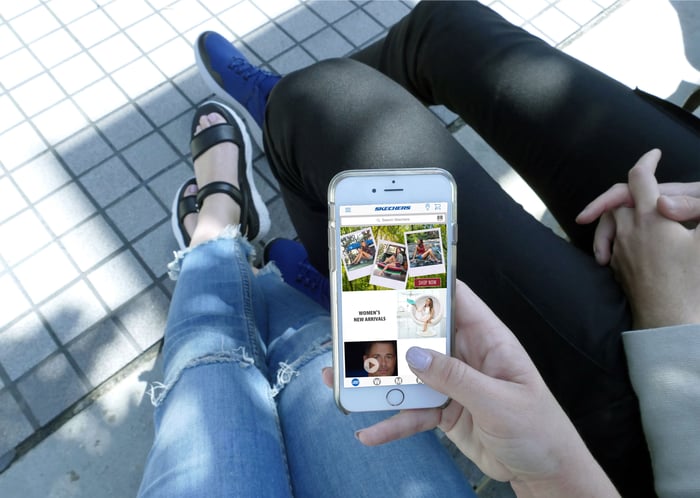 This growth isn't confined to any one particular country or region; it's coming from all over. For instance, management said the highest sales growth rate by percentages came from Spain and Italy, but by dollar amount, it came from China, South Korea, and the U.K. In Q4, 74 stores opened in China, giving it a total of 796 stores. Combined with wholesale, there are now almost 2,500 points of sale for the brand in China.

One of the best indicators of Skechers' overseas success, however, is the perception of the brand. In the company's fourth-quarter conference call, as transcribed by S&P Global Market Intelligence, COO David Weinberg talked about how highly the brand is esteemed in some international markets:

So I would tell you that the brand is perceived as quality. It's not considered as mid, but you can consider that an upper, although not the most expensive. So quality, designed well, fashion forward at a price, probably on average, slightly higher pricing than we see here in the United States. So if I had to take it, it's probably a couple levels up in most parts outside the United States, certainly not all, because there are some third world countries where they -- price is more significant than it is here in the United States.

Another aspect of Skechers' business that's getting harder to ignore is its e-commerce operations. While the company declined to answer how much its online sales represented in total sales, the growth rates were certainly impressive. Domestic e-commerce grew by 22% in 2017. In China, online sales grew by double digits, and Skechers now operates its own sites in Canada, Chile, Germany, Spain, and the U.K. Beyond its own sites, the company has a larger online presence with "third party" merchants in the United States.

The company says it understands the importance of this aspect of the business and is putting its money where its mouth is, as it's planning to invest heavily in this area in the coming year. During the conference call, Weinberg said:

[W]e show very well online, the brand is demanded online, it's searched online, and does sell whether it's directly through us, third parties around the world as we continue to grow our site. We are investing significant amount of money into our digital capacity, and we will be changing the site. And once we get the new site developed, which is in work now on [sic], we will bring it out and try to have our own presence around the world, every place we have subsidiaries."

Sure, Skechers has several catalysts fueling its growth, but what about its valuation? With adjusted earnings per share of $1.78 in 2017, Skechers is valued at a P/E ratio of 23.25. Not terribly cheap. But using the 2018 analyst consensus of $2.30 in EPS, the company's forward P/E ratio drops considerably to 18.

Of course, these numbers look even better once the company's cash on the balance sheet is taken into account. In Q4, Skechers reported $736.4 million in cash or cash equivalents on the balance sheet, a 2.5% year-over-year increase. That cash comes out to about $4.70 per share and represents about 12% of the company's market cap. If one were to subtract out the company's cash per share from the stock price, Skechers would currently be valued with a forward P/E ratio of 15.95. For a stock expected to grow sales in the double digits this year, that's cheap.

Skechers is a company with a lot going for it. Its brand presence around the world is fueling strong growth in several foreign markets, from Asia to Europe. The company is heavily investing in its e-commerce operations so that it will soon have a direct online presence in all the countries where its shoes are currently sold. Yet despite this growth and a cash-rich balance sheet, the company still trades at a more than reasonable valuation. As the bull market enters its ninth year, investments like this one are big shoes to fill.