Harley-Davidson (NYSE:HOG) wants to prove it is really serious about making electric motorcycles. Hot on the heels of announcing it will have a production e-bike ready by 2019, Harley announced it had taken a financial stake in Alta Motors, a small EV and components maker.

Considering the e-bike Alta makes is nothing like the Project Livewire motorcycle Harley-Davidson unveiled a few years ago, and which purportedly informs the electric bike it's building now, how the two will mesh to form a unified whole is a big question mark. 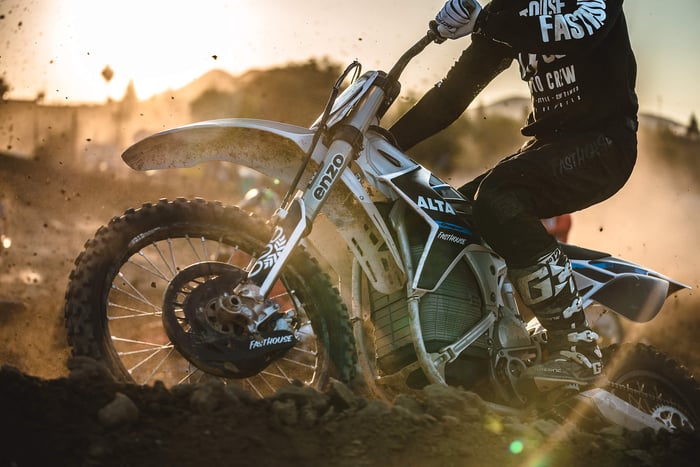 Harley has a problem. It's not selling many of its big, expensive machines anymore and needs to develop a lighter, cheaper bike. With the core middle-aged male customer aging out of the bike buying market, it needs to appeal to a new generation of riders that is younger, more urban, and female. It apparently believes an electric motorcycle that has no gears or clutch -- what Harley calls "twist and go" capabilities -- is the future of the industry.

Buying into Alta makes sense in that regard. The bike maker has committed to investing $25 million to $30 million a year in EV technology, though how much, if any, of that commitment went to Alta is unknown as financial terms were not released. However, Alta brings some seemingly cutting-edge expertise into Harley's orbit.

The EV maker's RedShift MXR is a 50-horsepower electric motocross bike that Alta says can out-accelerate a KTM 690 Enduro. It expects the RedShift to be sanctioned by the American Motorcycle Association for competition in the 250 class of motocross bikes.

The technology that underpins the bike is its battery pack, for which Alta claims "there is no smaller, more energy dense battery pack in transportation," and its liquid-cooled 14,000 rpm motor is "pound for pound one of the most powerful in motorsports."

The Alta investment isn't for Harley's initial production e-bike, but for what comes after, and one of the biggest questions that surrounds an electric motorcycle is its range. 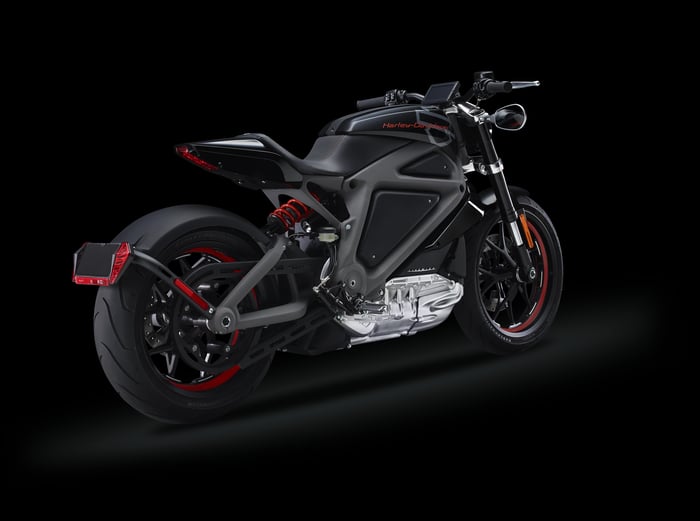 When Project Livewire was unveiled in 2014, it claimed a range of 53 miles, though it was admitted at the time that a minimum of 100 miles on a single charge would be necessary to make it viable. Alta's RedShift has a 60-mile range and can recharge in two and a half hours at 220 volts, or four and a half hours at 110 volts.

One would assume that if Harley has gone into production on its e-bike, it has solved the 100-mile question, but Alta could potentially significantly increase its advanced technology over time.

While the technology behind it is cool, Harley-Davidson investors will also want to know about market acceptance of an e-bike and whether the bike maker can do it profitably. Previously, I noted Polaris Industries (NYSE:PII) CEO Scott Wine is skeptical of the latter, otherwise he says his company would be all-in on the endeavor. And the automakers have yet to figure out how to make an electric car profitably despite the considerable resources that have been thrown at the problem.

Tesla (NASDAQ:TSLA), as the auto industry's EV pure play, generated $9.6 billion in auto sales last year, but despite receiving billions in government subsidies to drive sales, it still lost $2.2 billion last year. Later this year, the federal tax credits buyers get will begin phasing out, which could push Tesla's losses higher. General Motors (NYSE:GM) says it might not be able to build a profitable EV until 2021.

Certainly an electric motorcycle should be looked at as an investment, but there is a real question as to whether it's one Harley-Davidson should be making, particularly at this moment. While there is a market for e-bikes, it's not a particularly large one. Zero Motorcycles, perhaps one of the biggest and best-known manufacturers, produces just 2,000 e-bikes a year (maybe Harley should have bought it instead).

Harley-Davidson's electric motorcycle dreams still seem a bit quixotic at the moment -- and a diversion from the real problem of reversing sliding sales. It continues to produce big, expensive touring bikes when younger riders are looking for smaller, cheaper runabouts. The e-bike could fill the excitement component for Harley, but it remains a pricey option, and ultimately, they're a niche product at best.

As the bike maker says, it's still committed to its "gas and oil roots"; maybe it needs to fix that first before going off on tangents.