There's a lot to like about Google parent Alphabet (NASDAQ:GOOGL) (NASDAQ:GOOG). Aside from being the undisputed champ in search worldwide, the company is at the cutting edge of a number of developing technologies that could result in significant gains for investors in the future.

Google is among the pioneers in artificial intelligence (AI) technology. The company has developed a specialized chip -- the tensor processing unit -- to optimize the performance of servers running its TensorFlow AI framework. Its self-driving car unit Waymo is also at the head of the class when it comes to deploying autonomous driving technology, and some analysts believe the segment could be worth billions. The company recently revealed that Google's cloud computing operation is already a $1 billion-per-quarter business.

However, while we wait for these cutting-edge technologies to hit it big, it's the digital advertising business that pays the bills -- and business is booming. 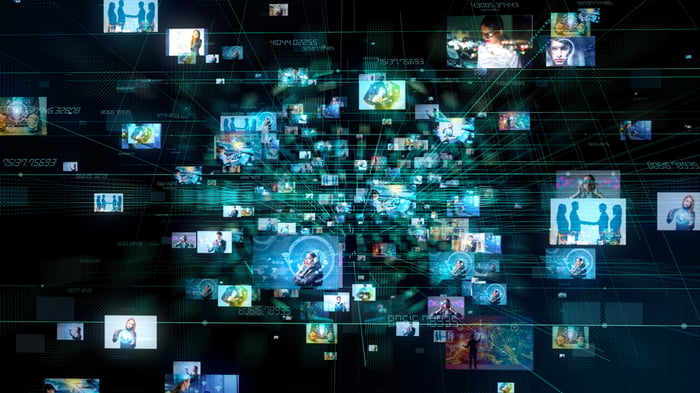 Digital advertising is growing, and the industry is dominated by Google. Image source: Getty Images.

Top player in a growing market

Digital advertising revenue in the U.S. totaled $40.1 billion for the first six months of 2017, and it will likely hit $85 billion for the year, according to The Interactive Advertising Bureau (IAB). The group's Internet Advertising Revenue Report, which was released in December, showed that digital ad spending grew 23% over the prior-year period to an all-time high. IAB said the growth was driven primarily by small- and medium-sized businesses moving their advertising dollars online.

Google, and fellow digital advertising duopoly member Facebook (NASDAQ:FB), may account for as much as 73% of all digital advertising in the U.S., up from just 63% in 2015, according to a report by Brian Wieser at Pivotal Research Group. He estimated that for the second quarter, Google and Facebook accounted for 83% of U.S. ad growth.

Jason Kint, the CEO of Digital Content Next, was a little more conservative in his estimates. He calculated that Google and Facebook combined account for between 60% of 70% of the entire digital ad market in the U.S. in 2017, with Google controlling 42% of the total. Early last year, Kint estimated that Google and Facebook together accounted for a whopping 89% of all growth in the sector for the prior year.

So, how does Google command so much of the digital ad market?

It helps to have the world's most popular search engine. Google controls 75% of the search market for desktop and laptops, and 87% for mobile devices.

It doesn't stop there. Google has seven products that that command over a billion users each: Gmail, Chrome, Maps, Search, YouTube, Google Play Store, and Android. Google announced last year that Android had surpassed 2 billion monthly active devices. YouTube is also a standout, with over a billion hours of video watched on the platform every day.

All of those users provide a captive audience for the Google's advertising, which is driving the company's financial performance. For 2017, Alphabet's revenue grew to $110 billion, up 23% year over year, while its adjusted net income climbed 16% to $22.5 billion.

Since Warren Buffett is among the most successful investors that ever lived, investors would want to learn from the master. For all of his successes, though, the legendary investor isn't perfect, and he says he missed out on the opportunity to invest early on in Google.

At the Berkshire Hathaway annual meeting last year, Buffett and vice chairman Charlie Munger admitted they had made a mistake by not investing in the search giant. Buffet said, "I blew it," while Munger added, "If you asked me in retrospect what was our worst mistake in the tech field" -- that was it.