Please ensure Javascript is enabled for purposes of website accessibility
Log In Help Join The Motley Fool
Free Article Join Over 1 Million Premium Members And Get More In-Depth Stock Guidance and Research
By Rich Smith – Mar 15, 2018 at 6:32AM

The Navy wants a frigate. First, it must choose a frigate builder.

Late last year, the U.S. Navy issued its official request for proposals from defense contractors interested in building a new frigate-class warship. Early this year, we found out which five companies have responded to the Navy's call.

On Feb. 16, the Pentagon announced it is awarding $15 million firm-fixed-price contracts "for Guided Missile Frigate (FFG(X)) conceptual design" to each of the following five companies: 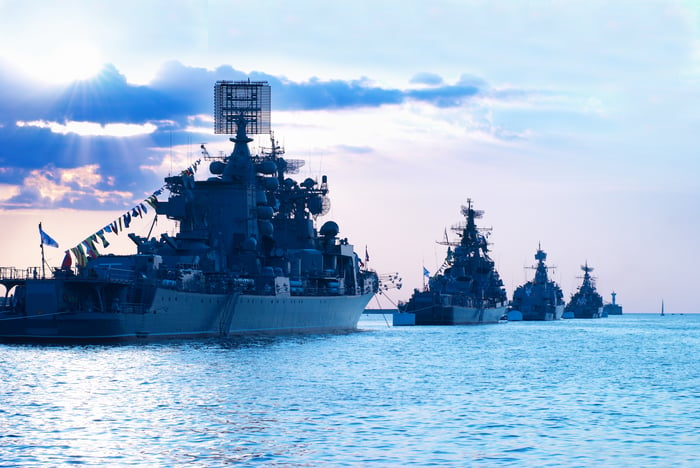 Each contractor is instructed to work up "conceptual designs" for the warships it will propose as the Navy's new guided missile frigate (FFG) for the 21st century, aiming to "reduce cost, schedule, and performance risk" on the warship -- if and when it is contracted to prepare a "detail design" and actually build it. There's no guarantee that any one of the firms will actually win such a contract, but the rewards for winning would be great.

The Navy hopes to buy as many as 20 frigates for its fleet, and is targeting a cost of no more than $950 million per warship. That puts the total value of this contract at something on the order of $19 billion.

What will the Navy get for its money? Retired Navy Capt. Jerry Hendrix laid out the offerings in a recent column in National Review:

As I say, if price is any sort of an object, Huntington Ingalls should have a fair shot at winning this contract (although Hendrix does have some concerns about the ships' suitability for a contested, wartime environment). At the other end of the scale, General Dynamics may have torpedoed its chances by partnering with Navantia to offer the Navy a warship priced at closer to $1.2 billion -- well in excess of what the Navy wants to spend.

Austal and Lockheed, meanwhile, fall in the middle of the pack. Their existing LCS designs sell for about $666 million each, according to the U.S. Government Accountability Office. With the upgraded guns needed to fit the Navy's frigate criteria, it's still reasonable to assume that Austal and Lockheed can hit the $950 million sweet spot for unit cost. Their biggest drawbacks: The Navy's dissatisfaction with the twin LCS designs is arguably the primary reason the Navy is abandoning the LCS, and asking shipbuilders to design a frigate in the first place.

Which brings us to Fincantieri and its FREMM frigate. Hendrix believes FREMM could sell for as little as $800 million, and argues that "its spacious design, combat capabilities, and cost" make FREMM "a clear front-runner."

Until we know more about precisely what improvements on existing designs the contractors will offer, and the ultimate cost, it will remain difficult to pick a winner on this contract. Here's one thing we do know for sure, though:

There's $19 billion at stake here. According to data from S&P Global Market Intelligence, only two of the contractors named above (General Dynamics and Lockheed Martin) do more than $19 billion in annual revenue. If any one of the other contenders wins -- Austal or Fincantieri, Huntington Ingalls or Navantia) -- this could literally transform its business, and transform the lucky company (for the duration of the contract, at least) into a leading global military shipbuilder.