Shares do an about-face after the company reports fourth-quarter results.

Shares of Corindus Vascular Robotics ( CVRS ), a robotic surgery company focused on vascular disease, fell 22% as of 3:39 p.m. EDT on Thursday after fourth-quarter results were released.

Here's an overview of the key numbers from the period:

Investors were given a sneak preview of the company's results in January so it isn't entirely clear why shares are selling off so much today. However, the stock also rocketed higher yesterday for no reason at all, so perhaps today's volatility isn't all that surprising. 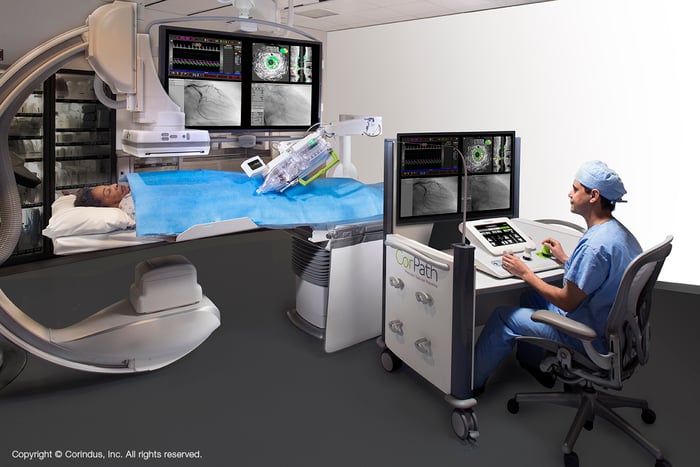 Looking beyond the financials, Corindus has notched a number of noteworthy wins recently, including:

When combined with the huge revenue growth and sizable market opportunity, it looks like Corindus is on a nice roll. Given the company's current market cap of just $257 million, there could be a substantial amount of upside ahead if the momentum can continue.

On the flip side, Corindus' cash balance is dwindling, so it likely won't be long before this company decides to raise capital at shareholders' expense. That's not great news when considering that this stock has been more than two-thirds down since its IPO in 2014.

Overall, I find Corindus' technology, opportunity, and business model to be intriguing, but this stock is still way too speculative for my taste. If you're interested in investing in the robotic surgery space, I'd suggest looking elsewhere.

Why Corindus Vascular Robotics Is Skyrocketing