Intuitive Surgical (NASDAQ:ISRG) has forever changed the face of surgery and minted its long-term investors a fortune. Given the success of the robotic surgery pioneer, it should come as no surprise to see that many other companies are trying to duplicate the company's business model. This includes beleaguered upstarts such as TransEnterix and Titan Medical as well as the big boys like Medtronic (NYSE:MDT), Stryker, and more recently, Johnson & Johnson.

However, TransEnterix and Titan Medical both remain extremely speculative investments, while at the opposite end of the spectrum, the medical device giants do not offer investors a pure-play way to bet on robotic surgery growth. What's an investor to do?

Thankfully, there is another alternative: Mazor Robotics (NASDAQ:MZOR). This Israeli-based company is focused on robotic spine surgery, which is a market that Intuitive's da Vinci system does not address. The company has grown like a weed in recent years, and its stock has responded in kind. I made a small investment back in 2013, and I'm already up more than 200%. Despite the run, there's still ample reason to believe that this sub-$1 billion company could turn into the next Intuitive Surgical.

Mazor Robotics' claim to fame is the Renaissance guidance system. This product enables spine and brain surgeons to place implants into the body with far more precision than can be performed by free hand. The increased precision leads to reductions in complication rates, lower exposure to radiation, and improved post-surgery pain. These benefits allow patients to get back on their feet sooner. 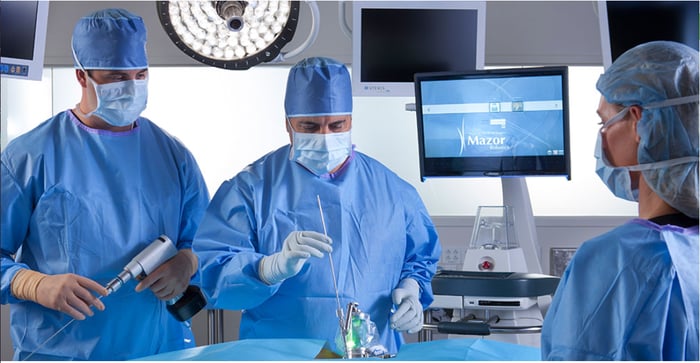 Mazor's business model should sound familiar to Intuitive investors. A fully loaded Renaissance system costs about $849,000, and each surgery requires the purchase of about $1,500 worth of disposables. Renaissance customers also have to sign a service contract that costs about 10% of the system's sale price. Between disposable products sales and service agreements, Mazor benefits from a growing stream of recurring revenue.

While the commercialization of the Renaissance system is still largely in its infancy, the initial uptake has been encouraging. Mazor has a worldwide install base of more than 145 systems, and surgeons have already used the Renaissance to perform more than 23,000 procedures. That may sound like a lot already, but Mazor estimates that the Renaissance system has an addressable market of about 500,000 procedures each year in the U.S. alone. Given that opportunity, some analysts predict that the robotic surgery market for spinal procedures is about to surge from $26 million last year to more than $2.77 billion by 2022. That represents a 100-fold increase in just six years.

Since Mazor is the lead husky in this race, medical device giant Medtronic decided that it wanted a piece of the action and signed a major partnership deal with the company last year. The agreement calls for Medtronic to use its massive sales force to co-promote the Renaissance and for the companies to collaborate on developing next-generation products. If the agreement works out for both parties then Medtronic can later become the sole provider of Mazor's future products and earn a commision on each sale. Medtronic even took an equity position in Mazor as part of the deal and retains the option to increase its stake over time.

The deal already looks like it is paying off handsomely for Mazor. Mazor received 62 Renaissance system orders in 2016, which was more than double the 25 system orders it received in the year before.

Given the uptick in system sales and vote of confidence from Medtronic, perhaps it shouldn't be all that surprising that the company's stock has vastly outperformed the iShares US Medical Devices ETF (NYSEMKT: IHI) since its 2013 IPO. 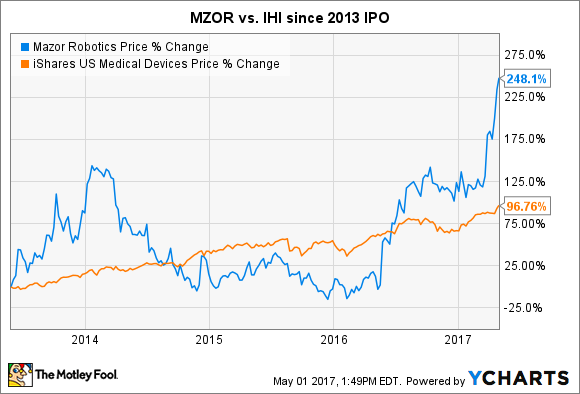 While Mazor appears to have a rock-solid business model and a deep-pocketed partner on its side, there are still plenty of risks investors need to keep their eye on. For one, Mazor is still losing money, as it set fire to more than $18.7 million in 2016 alone. While the company's cash balance of $61.8 million should ensure that its doors stay open for the foreseeable future, investors need to keep an eye on the company's burn rate.

Another risk for investors to watch is the Medtronic agreement. The initial deal calls for both companies to achieve certain milestones by the end of 2017. If all goes well, a second phase of the agreement would kick in. While early indications look like everything is going according to plan, it is possible that Medtronic could decide to pull out of the deal if it feels that it won't pay off. If that happened, it would likely be a huge blow to the bull thesis for Mazor, and the company's stock would likely tank.

While there are plenty of risks to consider, I think that Mazor is off a to a terrific start as a public company, and it has proven that its technology is here to stay. That's why I've decided to take a position in this company and could easily see myself hanging on to my shares for years to come.