Fitbit (NYSE:FIT) is losing prominence in the wearables space, and the company's latest round of results reaffirmed this reality. The wearables specialist is coming off a woeful 2017 where sales fell, losses expanded, and its latest product failed to excite customers.

Fitbit's fortunes won't be turning around anytime soon as it foresees another year of revenue declines. The company is pinning its hopes on a new smartwatch that will be released later this year and making moves into the healthcare space. But investors would do well to steer clear of Fitbit as it is facing some extremely challenging conditions. 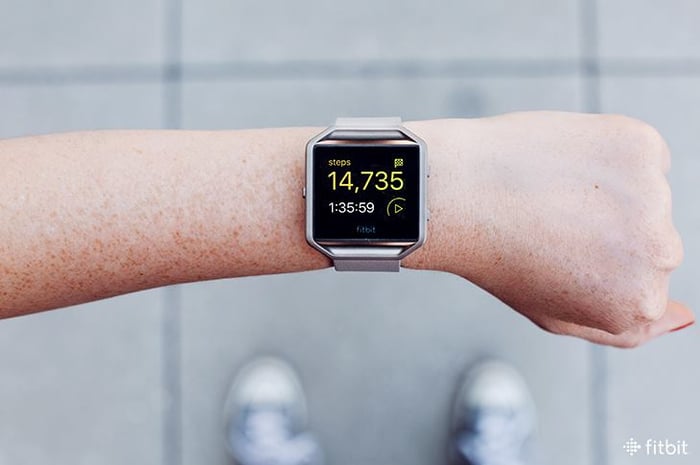 Fitbit sold 15.3 million devices last year, down from 22.3 million in 2016. Customers are no longer interested in devices that are purely fitness trackers and are shifting toward smartwatches that can perform a variety of functions, including fitness tracking -- a trend Fitbit failed to recognize.

The company tried to salvage the situation by introducing the Ionic smartwatch for the holiday season, but it was too late. Despite the new launch, Fitbit's fourth-quarter device sales fell nearly 17% year over year to 5.4 million.

In fact, the company's newly launched products supplied just 36% of revenue last quarter. This was in stark contrast to the 96% revenue contribution from new products during the year-ago period, which clearly indicates that Fitbit's products have lost their appeal.

The company expects its full-year revenue to drop around 7% in 2018. But this suggests a major improvement over the 26% revenue decline Fitbit reported last year. The company expects that the introduction of more smartwatches and its partnerships in healthcare will steady the ship, but this will be easier said than done.

2. The competition is winning

Fitbit's premium pricing for the Ionic smartwatch, which sells for roughly $300, backfired. The slightly more expensive Apple (NASDAQ:AAPL) Watch Series 3 offers more functions than the Ionic and only highlights the discrepancy. Fitbit seems to have realized its folly in giving the Ionic a premium status, so it plans to release more-affordable offerings throughout the year.

But Fitbit will find it difficult to crack the smartwatch market thanks to the growing popularity of Apple's smartwatch, and Apple has established a clear lead. Shipments of the Apple Watch jumped an estimated 54% in 2017, according to tech analyst Canalys, boosting Cupertino's market share to 21% at the end of the fourth quarter. Fitbit occupied second place with a 14.2% share.

By comparison, Apple held 14.4% of the smartwatch market during the final quarter of 2016, when Fitbit was leading the space with 18.5% market share. Apple could increase its smartwatch lead further this year as sales are expected to jump around 33% to almost 24 million units, while Fitbit's annual revenue forecast indicates that it will lose more ground.

Apple is expected to introduce new features this year in the Series 4 smartwatch, which could go on sale before the holiday period. That could make it one of the biggest beneficiaries of the growing smartwatch market, which is expected to clock sales of 140 million units in 2022 as compared to 71 million this year, according to mobile and wireless analyst CCS Insight.

Fitbit has been making notable moves in the healthcare space to establish a predictable stream of subscription revenue. For instance, it has struck partnerships with the National Institutes of Health, United Healthcare, and Dexcom to provide wearable devices for use in medical research and diabetes management.

And Fitbit recently announced that it is acquiring Twine Health, a start-up that connects people to medical professionals and fitness coaches to help them manage chronic conditions. This acquisition could launch Fitbit's subscription business in a big way as it has already established a user base of 25 million customers.

But it is too early to say how this acquisition will impact Fitbit because there are competing solutions available in the market already. Apple's healthcare platform gives users and medical professionals a wide range of features across devices such as the iPhone, the iPad, and the Apple Watch.

So Fitbit isn't breaking any new ground with the Twine acquisition. Moreover, Apple's huge ecosystem means that it enjoys an upper hand as medical organizations simply need to create apps for iOS devices instead of forcing patients to buy new devices from the likes of Fitbit.

In the end, Fitbit may pay dearly for being late to the smartwatch game as Apple runs away with the market. As such, Fitbit is a stock that's best avoided unless there are concrete signs of a turnaround.