At 5.16 degrees north latitude, Kourou in French Guiana is about as close as you can get to lying directly on the Earth's equator -- an almost ideal spot from which to launch a spaceship. 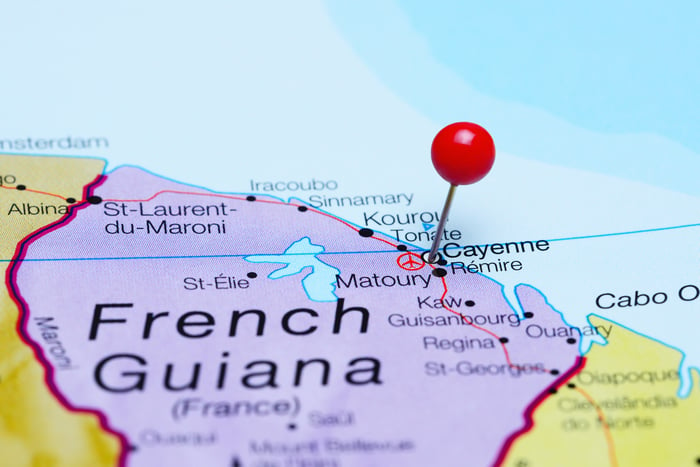 French Guiana is close to the equator -- but this pin actually drops 5 degrees north of it. Image source: Getty Images.

To hear Brazil tell it, you see, there's actually an even better place to put a spaceport than Kourou: Namely, the Brazilian city of Alcantara. Located in the state of Maranhao, at 2.40 degrees south latitude, Alcantara is less than half as far away from the equator as Kourou, and Brazil would really like to convince space companies that this makes Alcantara more than twice as attractive a place from which to launch their rockets. (Additionally, like Kourou, Alcantara is conveniently located next to a large body of water to the east, into which falling rocket parts can safely splash down).

Last year, Brazil made much this same argument to a group of representatives from U.S. space launch companies. Ranging from large to small in size, with names including Boeing (NYSE:BA) and Lockheed Martin (NYSE:LMT) and even tiny rocket launcher Vector, American space launch companies made the trek to Brazil.

In an article last week describing Brazil's pitch to the space establishment, Reuters reports that Brazil is offering Alcantara as a budget-priced alternative to launching from Kourou (a favorite launch site of Airbus (OTC:EADSY) subsidiary Arianespace). According to the Brazilians, launching from Alcantara can save North American space launch companies as much as "one third" on their fuel costs. This is because such launches get a bigger speed boost from the Earth's rotation, which is fastest at the equator and slows progressively as one moves north or south from it.

Still, it's not entirely clear what launch site Brazil picked as its "control" when making cost comparisons -- perhaps the Kodiak Launch Complex in Alaska, from which Vector, for example, plans to make its first orbital launch later this year. In contrast, relative to launches from better-known, more active spaceports such as Cape Canaveral, Vector CEO Jim Cantrell estimates that launching from Alcantara could yield fuel savings closer to 10% to 15%.

Will 33% savings -- or 15%, or 10% -- be enough to convince space companies to shift their business south from Florida to Brazil? Maybe not, if that were the only advantage. But as Cantrell told me in a phone conversation over the weekend, there are other advantages to launching close to the equator on top of simple fuel savings.

Because of quirks in the ballistics of missile launch, Cantrell explains, there are certain orbits that simply cannot be achieved with ease when launching from high latitudes but can be easily achieved when launching from near the equator. Over the course of the next five years, the U.S.-based Space Enterprise Council estimates we could see as many as 600 small rocket launches take place. The more satellites go up, the more satellites can be expected to slot into orbits easier-reached from equatorial launching points. This could help Alcantara capture as much as 25% of the market, says the Council.

In order for U.S. space companies like Boeing, Lockheed, and Vector to take advantage of Alcantara's offerings, however, a couple of obstacles must be overcome. First and foremost, a technology safeguards agreement (TSA) must be signed, whereby the United States State Department certifies Brazil's ability to protect U.S. "launching and operating technologies."

Brazil is hoping to finalize such an agreement this year, permitting development of an Alcantara spaceport to move forward, and chances of that look good. After all, the U.S. already approved such a TSA once before, in 2000 -- but Brazil's own Senate refused to ratify it. Presumably, if the political will is now present in Brazil to move forward, inking a new deal shouldn't be difficult.

Another issue is cost -- not the cost of rocket fuel this time, but of diesel fuel. Alcantara is, after all, more than 3,200 miles distant from Cape Canaveral, which is a long lateral detour to ask companies to make just to lift their sats a few hundred miles above the Earth's surface! Brazil's distance would add significantly to shipping costs for any rockets (and satellites) that U.S. companies want to build in the U.S. and ship to Brazil for launch.

Granted, such factors don't prevent Airbus from using French Guiana as its preferred launch site, but it's still a factor to consider when gauging Brazil's chances of success. Cantrell estimates that shipping one of its small Vector-R rockets from the U.S. to Brazil might cost anywhere from $200,000 to $300,000 -- a significant percentage of the company's estimated $1.5 million cost to put a small satellite in orbit.

Even if Alcantara turns out to be economically inadvisable for U.S. space launch companies, however, there's always the possibility that Brazil will try to use it as a springboard to launch its own space industry. As Reuters notes, Brazil is already working to develop a small rocket of its own, and intends to fly it out of Alcantara when ready -- perhaps as early as next year.

If and when that happens, expect the market for space launch to become even more crowded.