For at least the last four years, the U.S. Coast Guard has been talking about why it needs new icebreakers for its fleet. (Short answer: They have only two in operation today, down 75% from the fleet's size at the end of the Cold War -- and with the ice in the Arctic Ocean melting, there's never been a greater need for icebreakers to assist in navigating it). Now, at long last, it looks like the Coast Guard is going to get the icebreakers it needs.

Or one of them, at least. 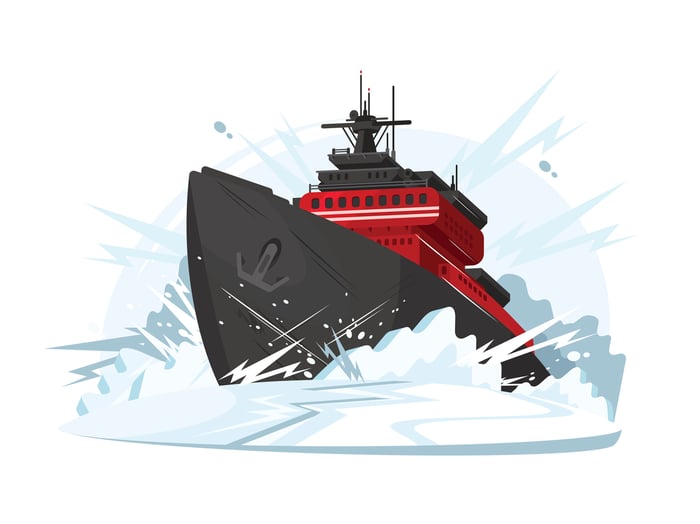 When you absolutely, positively have to reach the North Pole, who you gonna call? Icebreakers! Image source: Getty Images.

A story years in the making

President Obama's pledge to accelerate the process of getting the Coast Guard a new icebreaker back in 2015 helped to catalyze the acquisition process, moving up the estimated time of arrival of the new ship to 2020.

Coast Guard Commandant Admiral Paul F. Zukunft argues that new icebreakers are necessary "to advance U.S. interests and to keep pace with the growing volume of commercial activities in the polar regions."

Earlier this month, the U.S. Navy helped move the acquisition process along by fulfilling its own pledge to fund the construction of a heavy icebreaker within its own budget, then transfer that vessel to the Coast Guard. Together, the Navy and the Coast Guard released a joint Request for Proposals (RFP) on March 2, inviting shipbuilders to submit bids to build at least one heavy polar icebreaker (HPIB) -- and potentially as many as three.

Zukunft called this RFP "a major milestone in the collective efforts by the U.S. Coast Guard and the U.S. Navy to deliver a new fleet of polar icebreakers," and expressed a desire to award a contract for the construction "in fiscal year 2019."

Award a contract to whom?

If and when a contract is awarded, it would mean big bucks for the winner. Experts ballpark the cost at about $1 billion per vessel, edging down toward $900 million if economies of scale can be applied by doing a block buy of, say, three icebreakers. It's unknown at present who will bid to build these icebreakers, however.

The Coast Guard says it prefers that bids be submitted within 60 days of the RFP's issuance, which suggests bidders should begin emerging by early May.

As I wrote back in 2016, both Lockheed Martin (NYSE:LMT) and Huntington Ingalls (NYSE:HII) are likely bidders. Lockheed Martin built the heavy icebreaker Polar Star (still in service) back in 1976.

Huntington Ingalls, meanwhile, owns the shipyard that built the medium icebreaker Healy. America's third major military shipbuilder, General Dynamics (NYSE:GD), is more of a long shot as it has no history of building icebreakers. (Still, I see no reason why General Dynamics would not bid.)

Alternatively,  smaller, privately owned shipyards such as Bollinger Shipyards and Eastern Shipbuilding Group could be chosen. Both are established Coast Guard shipbuilders, having won work from that service branch in the past.

This would be a negative outcome for investors, however, as there's no effective way to invest in either Bollinger or Eastern -- and no way for investors to profit from the billions of dollars likely to be needed to build a new icebreaker.