Nike (NYSE:NKE) and lululemon athletica (NASDAQ:LULU) shares have both handily outperformed the broader retail industry over the last 10 years. One of the main reasons is that these companies are riding a growing athletic apparel market that is estimated to be on track to reach $350 billion in annual sales by 2020.

Both stocks may very well go on to outperform over the next 10 years, but which one is the better buy today? Let's take a look. 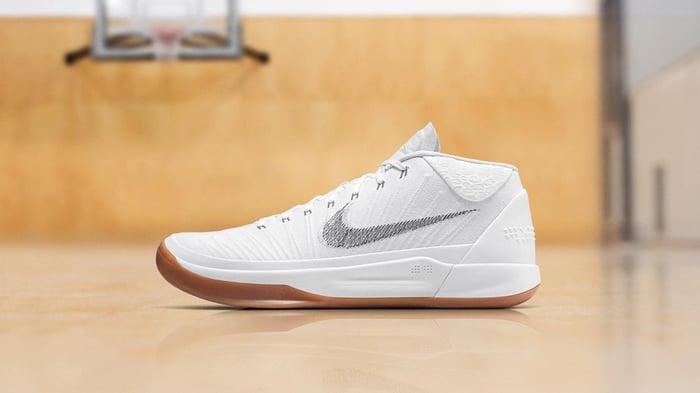 The investment case for Nike

Nike's "swoosh" logo is one of the most iconic out there. Forbes ranks the brand above all apparel retailers at No. 16 out of 100 of the most valuable brands in the world.

Over the past 10 years, revenue and earnings per share have grown 8% and 13%, respectively, on an annual compounded basis. However, growth has slowed over the last few years, as Nike deals with a more challenging retail environment and competition from rival Adidas.

One challenge for Nike is serving the more and more customers that want to shop online. While Nike's online sales grew 24% year over year through the first two quarters of fiscal 2018, online sales represent only 7% of Nike's total revenue.

Meanwhile, Adidas is gaining market share on Nike's home turf of North America. In North America, Adidas has been growing revenue more than 20% year over year, while Nike grew revenue just 2% in the first half of fiscal 2018.

Nike is clearly being outmaneuvered, but management has a plan to accelerate total revenue growth back to around 10% -- which would involve reinvigorating the North America region -- as well as deliver mid-teens earnings-per-share growth by 2020. This plan involves streamlining the product creation process, and eliminating underperforming product styles in order to expand gross margin.

Nike is also ramping up its innovation efforts, especially in its largest category -- footwear -- which makes up more than 60% of total revenue and grew only 3% in the second quarter.

On the second-quarter investor conference call, CFO Andrew Campion explained that over the next several months, "Nike will launch and scale more innovation than at any other time in our history." This will include expanding on its flagship running-shoe styles, like the Air VaporMax and ZoomX, as well as launching other styles. Over the next five years, as CEO Mark Parker explained to investors in November, "over 50% of our growth will originate from new innovation concepts that will scale across multiple categories."

Nike also is placing more emphasis on the women's category, which made up only 23% of revenue on a wholesale basis in fiscal 2017, but is growing faster than men's. While Nike has been mainly a men's brand, Lululemon has been mostly a women's brand, so both companies see a growth opportunity in balancing that out. 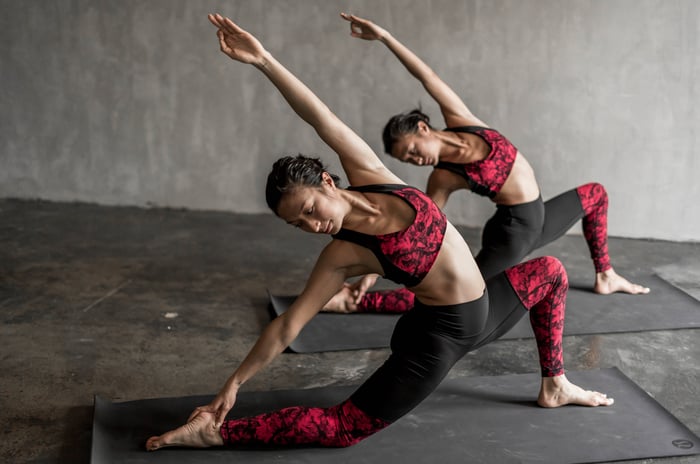 The investment case for Lululemon

Lululemon has built a strong brand designing fashionable yoga and running wear. The company is currently without a CEO, after Laurent Potdevin resigned earlier this year, but that shouldn't deter investors, because the company has so much growth opportunity across international markets, as well as growing the men's category and online sales.

Lululemon has managed to grow revenue and maintain a gross margin above 50% while charging premium prices, which is a testament to its brand strength. The yoga apparel specialist reportedly generates the highest sales per square foot among all apparel retailers at $1,560, which runs counter to the retail industry trend of declining sales per square foot over the last several years.

High sales per square foot are not only a reflection of selling pricey apparel; they also reflect the maximum value management gets out of each store by carefully opening the right store size in highly populated locations with attractive demographics.

Management expects to grow total revenue to $4 billion by 2020, which is 53% above what it expects to generate for fiscal 2017 (which ended in January this year). Earnings haven't grown the last few years due to investments made in the online business, as well as spending on more fabrics to support growth in both men's and women's.

However, on a non-GAAP basis, which strips out temporary costs related to the closing of ivivva stores (which sold clothing for girls), earnings per share are expected to be $2.45 for fiscal 2017 when the company reports fourth-quarter earnings later this month, representing growth of 14% over last year.

In the third quarter, Lululemon saw strong results in the three areas that will be key drivers to future growth: men's, international, and online sales. There was a 21% increase in new male customers, as the company recently began a marketing campaign targeting men. Also, online sales accelerated to 25% growth (excluding currency), and international growth has been off the charts, with consistent high growth in Asia and Europe.

The combined annual revenue of Nike and Lululemon is only about 14% of the athletic apparel market, so both companies have plenty of revenue-making opportunities over the long term.

Over the next five years, Nike management has guided for high single-digit revenue growth. And, as I mentioned above, management expects to improve earnings-per-share growth to the mid-teens level as it works on expanding margins.

However, Lululemon has established a strong brand, and the company is growing faster than Nike, as it grows off a smaller base of revenue. Based on management's 2020 target, revenue should continue to grow around 15% per year. The yoga apparel specialist is ahead of Nike in online sales, which is important in a slow retail environment, and Lululemon is seeing near triple-digit growth rates in Asia, which is a big long-term opportunity.

Overall, Lululemon offers better growth potential for a forward P/E ratio that is not much higher than Nike's, as shown in the table. In my view, that makes Lululemon the better buy.