French oil giant Total (NYSE:TOT) may not be the first company you think of when renewable energy comes up, but it should be near the top of the list. The company owns a controlling stake in solar manufacturer SunPower (NASDAQ:SPWR) and battery company Saft, and its list of renewable assets seems to grow every day.

Saft is making some interesting moves, most recently partnering with some other power players in the energy business to research better battery technology. If successful, Total could emerge with a strong position in one of the biggest growth industries in energy. 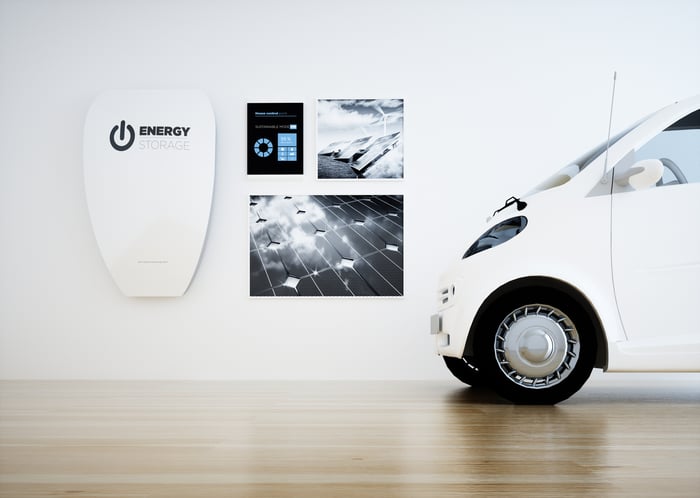 Saft is building an Alliance with other European partners to launch an ambitious program of research, development and industrialization for new generations of batteries focusing on advanced high-density Li-ion and Solid-State technology. The program addresses all market segments, such as electro-mobility (EV, e-Bus, Railway, Marine, Aviation), energy storage (ESS) and specialty industries.

The release went on to point out that products developed will have "performance, cost and safety advantages" over traditional lithium-ion batteries in the market today. Given the rapidly falling cost of lithium-ion batteries, that could truly be a game changer for the energy industry.

Not just a major electrical component supplier, Siemens is also a major player in energy storage through its partnership with AES called Fluence. The company is developing and financing energy storage projects around the world and this technology could make those projects more profitable. If the Saft alliance is successful, Fluence could become a major source of demand.

What shouldn't be overlooked is that solid-state batteries could be a great technology for energy storage and transportation applications. In other words, Saft could be going after Tesla's bread and butter in electric vehicles. We don't know whether new technologies will prove fruitful, but that investments are being made is notable to all involved.

It's also important that Saft's partnership is talking about more than technology and includes manufacturability. Developing new technology is important, but if Saft can't make the technology economically viable, it's a moot point. It clearly has an eye on that fact with this alliance.

Building on a solid base

Total is putting the pieces together to be a major player in next-generation energy. Saft is already a big entity in batteries and could build on that if a technology is developed that's better than existing lithium-ion batteries. Watch developments for Total in the next few years, because its balance sheet and renewable energy pipeline may make this a battery company with all the tools to take a leadership position in the market.