The obvious answer isn't always the correct one, as the fourth-quarter earnings report of Dick's Sporting Goods (NYSE:DKS) illustrates. Because of the state of the firearms industry, it would be natural to assume falling gun sales were the primary cause of the outdoor gear retailer's lackluster results, but gun sales were the least of its worries.

The real culprit for Dick's Sporting Goods was one its best-selling brands, Under Armour (NYSE:UA)(NYSE:UAA), which is trying to engineer a turnaround by expanding the outlets where its products are sold, but may be undermining itself in the process. 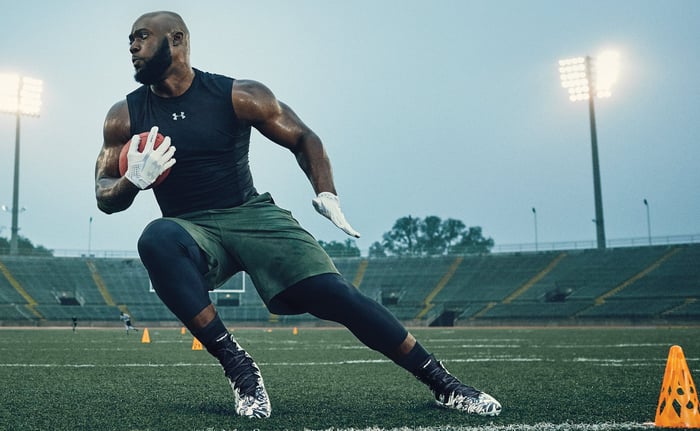 Dick's reported fourth-quarter net sales of $2.66 billion, a 7% increase over the $2.48 billion it generated in 2016, but comparable-store sales fell 2%. Both sales figures missed analyst expectations because Under Armour dramatically underperformed expectations. Apparel was actually a bright spot for the retailer as Dick's said it saw especially strong results from Adidas, Patagonia, and its own CALIA by Carrie Underwood brand. Although Dick's enjoyed double-digit comps in its private-label goods and low single-digit comps increases in footwear, a woeful performance by Under Armour dragged them all down.

Dick's Sporting Goods and Under Armour rely heavily on each other. The activewear maker is Dick's second best-selling brand behind Nike, accounting for around 12% of total sales, while the sporting goods retailer is Under Armour's biggest customer. Though these days it represents less than 10% of total sales.

The bankruptcy of Sports Authority two years ago hurt a number of retailers, causing Under Armour to seek to make its apparel more widely available to consumers beyond traditional sporting goods stores, including Dick's.

It partnered with mid-tier department store chain Kohl's (NYSE:KSS) to sell a new line of activewear to make up for the shortfall, and though the move did broaden its availability, it hurt the brand's relative exclusivity. It also ticked off Dick's Sporting Goods, which launched its own activewear line called Second Skin in response. While it couched the product launch in terms of meeting the needs of "an underserved and growing population" of athletes, athletic wear is hardly an underserved market, and it was really an attempt to undercut Under Armour's prices by selling Second Skin "at more desirable price points."

Unfortunately for Dick's, the Second Skin line hasn't gained the traction that the retailer hoped for, admitting it had some issues with the merchandise and would be relaunching the brand again soon.

Kohl's, though, is having success with Under Armour, calling out the "extremely strong and above-planned performance" of the brand during its fourth-quarter earnings report. That's because consumers realize they no longer have to pay a premium price at Dick's, and can get it at a discounted price at Kohl's. Yet those lower prices are eating into Under Armour's profits, with the company reporting gross margins fell by 140 basis points to 45% in 2017.

Under Armour is to blame

Apparel is an important category for Dick's Sporting Goods, representing about 35% of total revenue. Although hunting gear is part of a larger group of goods that represents 45% of sales, and it was down for the period, Dick's overall outdoor equipment business still saw comparable sales rise.

That means that despite the downward spiral of the firearms industry -- and Dick's own policy positions on selling certain guns going forward -- the real driver of the retailer's problems was Under Armour.

Dick's CEO Ed Stack offered words of comfort, saying he believed Under Armour would turn around its business eventually. But what should be obvious going forward is that the close relationship between the two is strained, and the activewear maker's efforts to sell in other markets isn't helping.