Apple (NASDAQ:AAPL) is hosting an event next Tuesday focused on education. It's been a few years since the company's last education event in 2012, which focused on digital textbooks. Next week's unveiling will be the company's first product event of 2018. Given the tech titan's historical approach to the educational market, it's not too hard to imagine what product will headline the occasion:

It'll be all about the iPad. 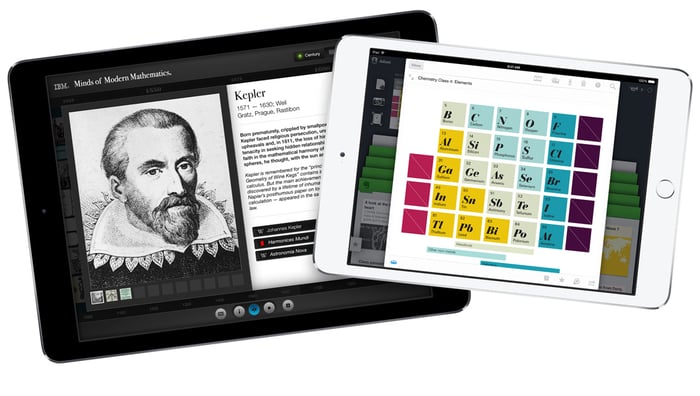 Bloomberg's Mark Gurman reports this morning that an affordable iPad is indeed scheduled to debut alongside new software designed to cater to the education market's needs. The report doesn't include any details regarding possible specifications a new iPad could feature, but ultimately the most important feature to the segment that Apple is addressing will be price.

Alphabet (NASDAQ:GOOG) (NASDAQ:GOOGL) subsidiary Google has made meaningful inroads in education with Chromebooks precisely because they are low-cost laptops that can fit in the budgets of school districts. Many Chromebooks cost less than $200, and it seems unlikely that Apple would be willing to venture into that segment of the market considering its premium pricing strategy. Apple likes to highlight its dominance in the market for tablets priced over $200, most recently in the August earnings call, when it boasted of an 89% share of that market segment.

Meanwhile, introducing the $329 iPad last year has helped boost unit sales. That device was essentially an older model with upgraded internals being offered at a lower price, and CEO Tim Cook has said that "bifurcating iPad and iPad Pro" is working wonders already. It seems conceivable that Apple could adopt a similar strategy of repurposing an older design with upgraded (but not state-of-the-art) specs in order to reduce costs and hit lower price points. Bloomberg's report does not give any specific indications regarding possible price.

Apple is also rumored to be working on a new entry-level MacBook, a mainstay among college students, but the laptop is not expected to be ready for next week's event.

Microsoft has lost more than Apple

Beyond Chromebooks, which now represent 60% of the market, Microsoft (NASDAQ:MSFT) has also been trying to better address the market, including with a new mobile device management offering last year designed for education. Apple had never made a big dent in the first place, so Microsoft has actually lost more to Google's growing position, as those Chromebooks are largely displacing PCs as opposed to iPads.

The software giant has been able to reclaim some market share recently, at least in the U.S. Windows gained 6.5% market share in the education market for devices under $300 in the fourth quarter, according to Futuresource Consulting.