Please ensure Javascript is enabled for purposes of website accessibility
Log In Help Join The Motley Fool
Free Article Join Over 1 Million Premium Members And Get More In-Depth Stock Guidance and Research
By Rich Smith - Mar 25, 2018 at 7:15AM

Last year, 10 of the biggest global carmakers came together to announce their commitment to "minimizing the environmental impact of their industry." Among the goals of this "Drive Sustainability" coalition is reducing the carbon footprint of the products they make -- including by buying raw materials manufactured with smaller carbon footprints. Happy to facilitate such thinking, aluminum manufacturers have been working to find less environmentally stressful ways to produce their product, including through the increased use of renewable energy to produce aluminum. 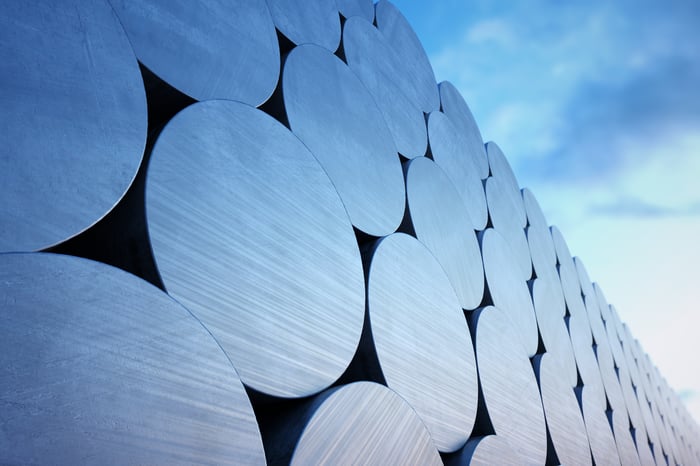 Most aluminum is silver in color -- but Alcoa's aluminum is looking kind of green. Image source: Getty Images.

Aluminum producers, such as Alcoa and its rivals, which include Britain's Rio Tinto (RIO 0.35%) and Norway's Norsk Hydro (NHYDY 1.37%), are also happy for the excuse to charge more for aluminum produced with a smaller CO2 footprint. Russian aluminum giant Rusal, for example, sells an "Allow" brand of low-carbon-certified aluminum, commanding prices $20 to $50 more per ton than for ordinary aluminum in global markets.

Rio Tinto sells a "RenewAl" aluminum brand, the production of one ton of which emits four tons or less of CO2 into the atmosphere. (If that sounds like a lot, consider that coal-fired plants emit closer to 18 tons of CO2 per ton of aluminum produced). Norsk Hydro actually has two green aluminum brands: "Hydro 75R," which contains at least 75% recycled aluminum, and "Hydro 4.0," which, like Rio Tinto's offering, boasts less than four tons CO2 emitted per ton of aluminum produced.

Alcoa, too, has discovered that it can charge "premium prices for aluminium made using renewable energy rather than fossil fuels," reports Reuters. Alcoa doesn't call its products "green aluminum" of course. (None of these companies do, preferring to emphasize their own distinctive brands.) But Alcoa's "Sustana" brand of hydropower-produced aluminum boasts a carbon footprint of less than 2.5 tons per ton of aluminum produced, making it arguably "greener" than any of the other aluminum brands mentioned.

And this month Alcoa is moving to expand green aluminum production in environmentally conscious Norway.

When in Norway, do as the Norwegians do

On March 7, Norwegian wind power firm Eolus announced it had inked a contract with Alcoa's Norwegian subsidiary, Alcoa Norway ANS, to sell its entire production of wind-produced electricity from Eolus's new 330 megawatt Oyfjellet wind farm. Over the course of 15 years, Eolus is expected to produce 1.2 terawatts of power at the wind farm, and sell every last watt of it to Alcoa, for use at the latter's production facility in Mosjoen.

Why would Alcoa make such a long commitment to buy wind power for its facility? Profits are one answer. As noted above, aluminum manufacturers are discovering that when they brand their aluminum as environmentally friendly, green-conscious customers may be willing to pay a higher price for it.

The location of the plant that will be buying Eolus's wind power could also be key. Roughly 5% of Alcoa's global assets are located in Norway, according to data from S&P Global Market Intelligence. Maintaining a good PR image in Norway may be important to Alcoa for this reason -- even if the profits from sales of green aluminum were not the smart financial move.

Is selling branded, green aluminum a smart move financially? That's hard to say. For the time being, "Sustana" aluminum doesn't appear to be an important enough part of Alcoa's business to merit separate mention (anywhere) in the company's 10-K filing. On the other hand, though, most of the green-branded aluminum varieties coming to market lately have been announced over just the past six months. It's probably too early to say whether this is a real, profitable trend in environmentally responsible metals production -- or a fad.

That said, if this is a trend that will be good for profits, that fact should make itself known over time, in the form of rising gross profit margins for Alcoa. If Alcoa's gross margin -- up nearly seven percentage points in 2017 alongside the reviving global commodities market -- continues to rise and if sales of branded, green aluminum rise with it, that could suggest a link.