Jason Hall, Keith Speights, and Demitri Kalogeropoulos
(TMFVelvetHammer)
Author Bio
Born and raised in the Deep South of Georgia, Jason now calls Southern California home. A Fool since 2006, he began contributing to Fool.com in 2012. Trying to invest better? Like learning about companies with great (or really bad) stories? Jason can usually be found there, cutting through the noise and trying to get to the heart of the story. Follow @TMFVelvetHammer

Investing in retirement requires a lot of balance. On the one hand, when it comes to assets you'll need to sell in the next few years, you want to pick those that can be counted on to preserve their value. Stocks are too risky in general for that short-term money. On the other hand, a large fraction of retirees will live into their 80s, meaning their portfolios will have decades in which to grow. And given that they'll have the time to ride out the downturns, stocks should remain a key part of their investing strategies.

Value stocks can be a powerful way for retirees to offset some of the risks of stock ownership. Buying a high-quality stock at a discounted price can create a bigger margin of safety, as well as potentially leading to better long-term gains, which even retirees need. 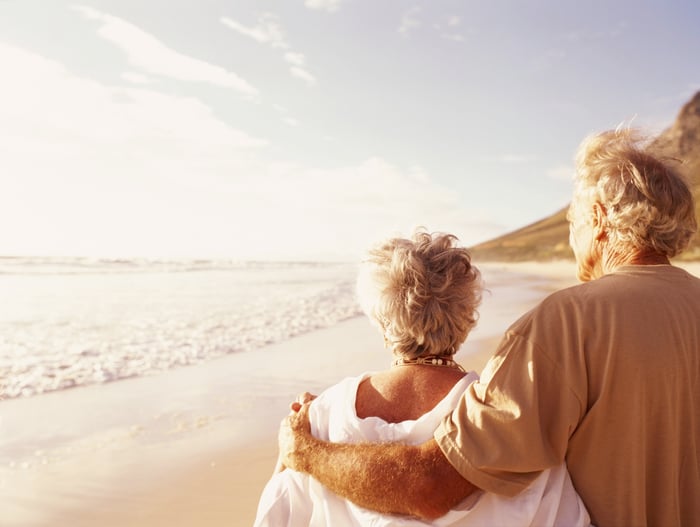 Keep reading to learn more about these three value stocks, why they made the cut, and whether they're ideal for your portfolio.

Being greedy in a fearful market

Jason Hall (Nucor Corporation): At this writing, shares of Nucor are down around 13% from their post-Great Recession peak, reached earlier this year. There are some legitimate reasons why Nucor -- and most steelmaker -- stocks are down, including potential tariffs against foreign imports that could backfire and weaken the economy, which would be awful for domestic steel demand. There have also been worries that the Trump administration's rhetoric and potential trade actions against China could be even more damaging to domestic steel consumption.

Depending on how these things play out, it could be harmful to Nucor and its domestic peers, but almost certainly only for the short term, as with any economic cycle's ups and downs. But even with the short-term concerns, it's created an opportunity. At recent prices, Nucor trades for less than 15 times last year's earnings, well below both its own recent valuation and far cheaper than the average S&P 500 stock, which sells for almost 25 times earnings today.

Why Nucor instead of some of its peers? For one, Nucor's operations and management are peerless. Not only is Nucor more profitable in every market condition, but management has done a much better job with capital allocation. 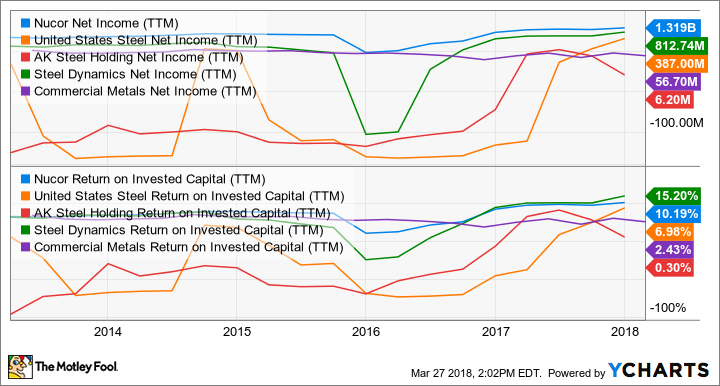 It's possible that tariffs or other trade actions against steel importers could cause harm in the short term. But the opportunity for solid returns -- over time -- makes Nucor an ideal investment for retirees looking for dependable long-term growth. Add a dividend yield around 2.5% at recent prices and it'll be easier to hold through any near-term ups and downs while the long-term story plays out, and investors return to this industry leader.

Demitri Kalogeropoulos (Lowe's): If you're seeking exposure to the home-improvement industry but don't want to pay the premium for market leader Home Depot (NYSE: HD), consider Lowe's. Sure, the retailer trails its rival in key metrics including sales growth, profitability, and return on invested capital. But Lowe's recent results would be considered healthy in comparison to just about any other retailing giant. Sales growth held steady at a solid 4% increase in fiscal year 2017, as operating profit rose to $6.6 billion, or 9.6% of sales, up from 9% in the prior year. 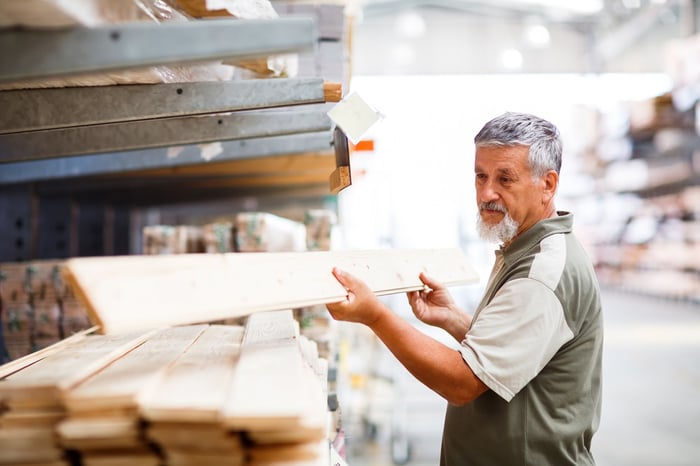 Lowe's has a longer track record of dividend growth than Home Depot, having kept its streak of annual raises going during the Great Recession. Its 35% payout target provides a big cushion that should allow those increases to continue in the years ahead, too. Home Depot's 55% payout is more generous, but also harder to depend on during those inevitable, but unpredictable, industry downturns.

Lowe's recently announced a range of new strategies the management team hopes will improve its operating results starting in late 2018. Even a small step in the right direction might be enough to close the huge valuation gap between it and its main competitor. Lowe's stock, after all, is valued at one times sales today compared to roughly two times sales for Home Depot, and also cheaper based on earnings and cash flows.

Keith Speights (Pfizer): Your investing goals in retirement are different than what they are when you're younger. While growth would be nice, steady income and relative stability become much more important. Pfizer provides both.

The big drugmaker's shares currently trade at an earnings multiple of only 10.4 -- less than half the S&P 500 average and below most of its peers. However, that multiple is helped by a big one-time tax benefit in 2017. Still, Pfizer stock trades at less than 12 times expected 2018 earnings, which definitely qualifies it as a value stock in my view.

As for steady income, Pfizer pays a dividend that currently yields 3.74%. The company is in solid shape to keep those dividends flowing, using only a little over half its free cash flow to fund its payout. Investors should also be encouraged that when Pfizer's executives are asked about cash allocation priorities, returning cash to investors in the form of dividends is listed first.

Although Pfizer has experienced headwinds in recent years from declining sales of several drugs that lost patent exclusivity, the company's future looks bright. Not only does Pfizer claim several successful blockbuster drugs, notably including cancer drug Ibrance and anticoagulant Eliquis, the company's pipeline looks solid. Pfizer thinks it could win approval for up to 15 potential blockbuster drugs over the next five years -- three times as many as it did during the past five years.