IBM (NYSE:IBM) sits at a crossroads in its current turnaround, with the company recently returning to year-over-year revenue growth for the first time in 22 quarters, and with top executives outlining the company's longer-term strategy at a recent investor presentation.

Part of what will power IBM's growth is good old-fashioned innovation, with the company making big bets on artificial intelligence, blockchain solutions, and quantum computing. IBM hopes investments in these "frontier technologies" will fuel growth as its legacy business lines continue to slowly decline.

At its Think 2018 conference this month, the company unveiled a new innovation that will tie in with its blockchain bet: the world's smallest computer. 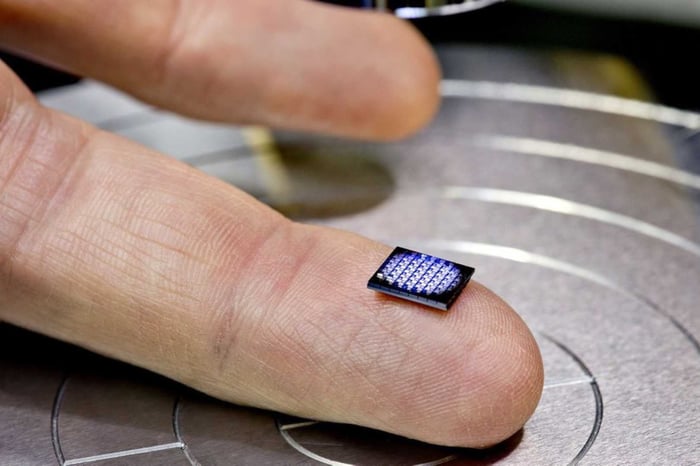 IBM's new computer is 1 millimeter by 1 millimeter -- that's smaller than a grain of salt! But that tiny package packs a punch: IBM says the new device holds several hundred thousand transistors and has as much computing power as an x86 computer processing unit (CPU) from 1990.

That's enough to provide valuable monitoring, data storage, and analysis of certain objects, and IBM has designed these tiny computers to attach to physical goods in a supply chain. These near-invisible "tags" will work in conjunction with IBM's blockchain technology, which will track objects as they move from manufacturers through the supply chain and all the way to the end consumer.

The company has said that "the world's smallest computer is an IBM-designed edge device architecture and computing platform that is smaller than a grain of salt, will cost less than ten cents to manufacture, and can monitor, analyze, communicate, and even act on data." It's also noted that "these technologies pave the way for new solutions that tackle food safety, authenticity of manufactured components, genetically modified products, identification of counterfeit objects, and provenance of luxury goods."

Thus, the combination of these tiny, extremely cheap computer tags and IBM's blockchain technology could become a formidable product for the global shipping industry.

One company that may be threatened by the new product is Impinj (NASDAQ:PI), a producer of radio-frequency identification (RFID) tags. The RFID industry is currently estimated to be at about $5.5 billion, but is expected to grow around 12.3% per year to $17.75 billion in 2027, according to research firm Future Market Insights (FMI). With that kind of growth potential, Impinj had been a darling of the tech market, until last year.

Since around the beginning of 2017, Impinj has had a rough go of it. Its shares have been more than cut in half thanks to slowing growth, and its CFO is leaving the company this week. The company attributed the slowdown to a cyclical pause in customer purchasing. It also maintained its growth potential was intact but "farther out in time."

Should IBM's new minicomputers make inroads against RFIDs, it may call into question Impinj's promises of better days ahead.

IBM is making a big bet on blockchain and advanced hardware as part of its growth plans. While the current business has been the victim of technological change and disruption, IBM hopes to strike back with these innovations of its own. The success of these frontier tech products, like this 1-millimeter computer for blockchain, will be key in determining whether IBM's stock can spring back to life.