Please ensure Javascript is enabled for purposes of website accessibility
Log In Help Join The Motley Fool
Free Article Join Over 1 Million Premium Members And Get More In-Depth Stock Guidance and Research
By Brian Stoffel – Apr 2, 2018 at 9:51AM

Two are well-known, but the third could be the biggest winner of them all.

Let's be clear from the outset: there are exactly zero stocks out there you can "set and forget." Since the dawn of the Internet, the pace of change in society has only accelerated, and I don't think that will change anytime soon. As such, no incumbent is 100% safe from disruption.

That being said, there are stocks that posses three traits crucial to any good investment. Many of these traits I've derived from the writings of former trader Nassim Nicholas Taleb. 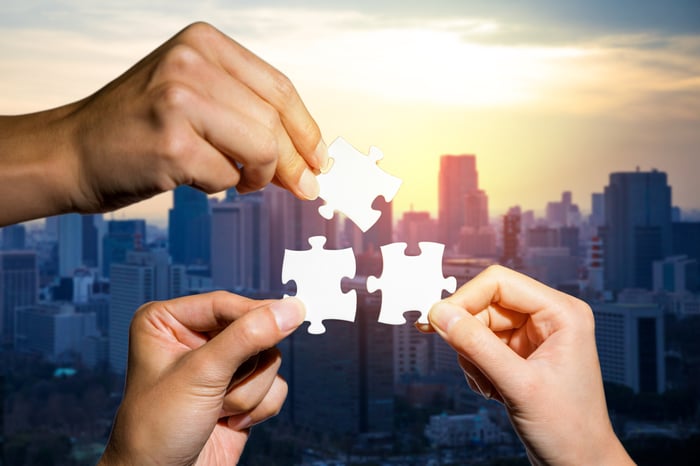 Requirement #1: A wide moat with lots of experimentation

By far the most important thing for any long-term investor to research is a company's sustainable competitive advantage -- often referred to as a "moat." While there's no standard definition of a moat, in my book, it comes in four different forms:

Often, a company is lucky if it has just one of these moats. Rarer are those that have multiple. But one of the things that makes all three of these companies so valuable is that they have enormous moats.

Equally important, none of these companies is resting on its laurels. They are adopting optionality: the approach of tinkering with low-risk, high-reward experiments.

This is what transitioned Amazon from an online bookstore to the e-commerce, content-producing, package-shipping conglomerate that it is. Alphabet's Google[x] is chasing after moonshots. And along with its own tinkering, Tencent has used its extra cash to invest in several other Chinese and international upstarts.

The wide moat protects from competition, and the tinkering opens up the possibility of huge new avenues for growth -- with comparatively little downside.

This is a measure of what would happen to a company's prospects -- over a decades-long time horizon -- if an economic crisis hit right now.

One look at the financial statements of these three shows that they are all very antifragile.

Amazon is admittedly the weakest of the bunch here. But it's worth noting that much of the debt was only recently added as a result of the Whole Foods acquisition, and if a crisis were to hit, all the company would have to do is hit the brakes on its reinvestment and it would be fine.

Requirement #3: Skin in the game

Finally, we have an aspect often overlooked. If a company is run by a founder, that person often has his/her "soul in the game": the company is an existential extension of their being. If they were just in it for the money, they would have sold out after the IPO.

But just in case they are motivated by cash, their huge holdings of the stock provide a disincentive from making businesses decisions that could affect the long-term viability of the business.

As you can see, all three of these companies are still run by their founders, and all of them have management teams with significant skin in the game.

I believe that when you combine these three facets -- wide moats with optionality, financial fortitude, and skin in the game -- you have found stocks that are as close to "buy and hold forever" as you can get these days.

They're all worthy of your investment dollars. My skin is solidly in this decision, and I think you should consider putting yours in as well.