The holiday season is far behind us, and many investors have largely forgotten about the retail sector. During these doldrums, it's easy to find retail stocks on the cheap -- but harder to separate the long-term winners among these discount tickers from their less fortunate rivals.

So we asked a handful of investors at The Motley Fool to share some of their best retail investments at this particular moment. Read on to see what's special about Lululemon Athletica (LULU 0.14%), Guess (GES 0.96%), and The Michaels Companies (MIK) right now. 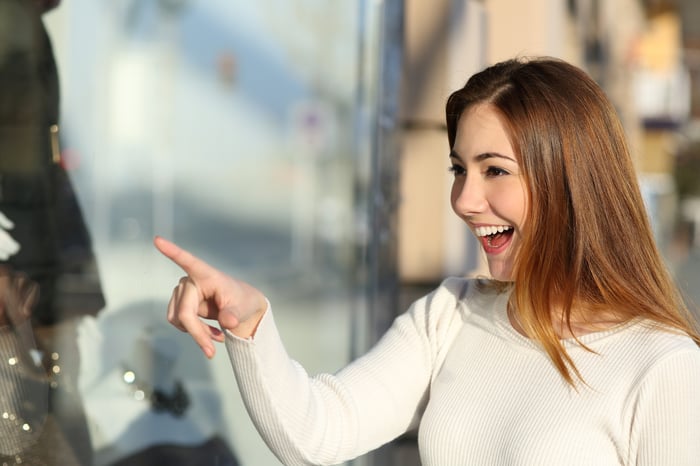 Shares are cheap for all the wrong reasons

Anders Bylund (The Michaels Companies): Change can be difficult. Michaels is going through a lot of that right now, and market makers are nervous about the new direction. There's a juicy upside to that misunderstanding because there's a fantastic buy-in window open for this stock.

The arts and crafts retailer reported fourth-quarter results two weeks ago, right in line with Wall Street's estimates. Comparable store sales rose 2.5% in the fourth quarter, driving net sales 8% higher at $1.89 billion. On the bottom line, adjusted earnings jumped 16% higher to land at $1.19 per diluted share. Those are respectable results for any traditional retail outfit these days.

But Michaels shares fell as much as 10.6% the next day because traders were spooked by modest guidance for the next quarter and fiscal year. Management plans to invest the windfall from lower tax payments into store remodeling and other infrastructure improvements. While these investments are being made, store traffic may see some disruption amid each store's rebuilding and reorganizing efforts, and the bottom line obviously suffers from the combination of limited sales and boosted operating costs.

So calendar year 2018, or fiscal 2019, looks like a rebuilding period where Michaels creates the platform for stronger business later on. At the same time, the store caters to a market where customers crave a hands-on experience -- e-commerce isn't that much of a threat here. That's not obvious to many investors, so the stock is selling at a huge discount. Having fallen 19% year to date, Michaels stock can be bought at the bargain-bin valuation of nine times trailing earnings and 0.7 times sales. All of this plus low business risks likely equals a big rebound as the company's growth story plays out.

Breathe deep and hold that pose

Demitri Kalogeropoulos (Lululemon): The broader sports apparel industry has been weak lately, but Lululemon is easily bucking that negative trend. In late March, the company revealed that comparable-store sales shot higher by 12% over the holiday quarter to push revenue above the upgraded guidance that management issued just weeks earlier.

Sure, the yoga-inspired clothing specialist got most of that growth from its booming e-commerce sales channel, which jumped 44% in the period. But customer traffic was positive in its physical locations, too. And unlike many of its rivals, the shift toward digital sales is helping boost Lululemon's earnings power. In fact, gross profit margin improved by over 2 full percentage points last quarter to reach 56% of sales.

Management said in late March that traffic growth is accelerating in both of its core sales channels at the start of the new fiscal year. That success gave executives confidence to forecast revenue of about $3 billion in 2018 to mark a big step toward their 2020 target of $4 billion of annual sales. The company is hunting for a new CEO following the abrupt departure of Laurent Potdevin. But the incoming boss should have an unusually smooth transition as he or she takes the reins during a period of accelerating sales growth and near-record profitability.

Guess what? Guess is back.

Leo Sun (Guess): Shares of Guess rallied nearly 90% over the past 12 months as the apparel retailer staged a remarkable comeback on rising overseas sales. Like many of its industry peers, Guess previously struggled with sluggish mall traffic, tougher e-commerce rivals, and the rise of fast fashion retailers like Inditex's Zara.

However, Guess pivoted away from the tough Americas market and focused more heavily on expanding in Europe and Asia. This strategic shift helped Guess break a multiyear streak of revenue declines with six consecutive quarters of annual sales growth.

That growth significantly accelerated last quarter, as Guess' revenue rose 18% annually to $792.2 million, beating estimates by $36.5 million. On a constant currency basis, its revenue grew 10%. Its retail sales in Europe and Asia both grew a whopping 40% annually and offset a 6% decline in the Americas.

Guess' pricing power, along with tighter cost controls, boosted its operating profit by 226% annually to $68.4 million during the quarter. Its non-GAAP earnings surged 40% to $51.3 million. For the current year, Guess expects its revenue to rise 7% to 8%, and for its earnings to grow 23% to 40%.

Guess trades at 22 times forward earnings, which is much lower than its projected earnings growth. It also pays a hefty forward dividend yield of 4.3%, which is more than double the S&P 500's current yield of 2%. If you're looking for a comeback play in retail with a reasonable valuation and a high dividend, Guess fits the bill.