Please ensure Javascript is enabled for purposes of website accessibility
Log In Help Join The Motley Fool
Free Article Join Over 1 Million Premium Members And Get More In-Depth Stock Guidance and Research
By Dan Caplinger – Apr 3, 2018 at 8:31AM

Find out how these big-name consumer stocks stack up.

During periods of market turbulence, large companies that sell popular consumer goods tend to have greater stability and more attractive defensive characteristics than companies that are more cyclical in nature. Philip Morris International (PM -1.44%) and PepsiCo (PEP -1.22%) don't sell the same things, but they both have put together impressive worldwide production and distribution networks that have helped them create globally recognized brands.

Health concerns have long plagued the tobacco industry, but they're a relatively new challenge for beverage and snack makers like PepsiCo. Nevertheless, both companies are working hard at adapting to new demands from their customers, and smart investors are looking at both stocks to see whether one is the better pick right now. Below, we'll look at Philip Morris and PepsiCo on a number of key metrics to help you make the best choice.

Both Philip Morris and PepsiCo have struggled over the past year, but the beverage giant has seen smaller losses. PepsiCo is down 4% since April 2017, compared to a 14% drop for the tobacco giant. 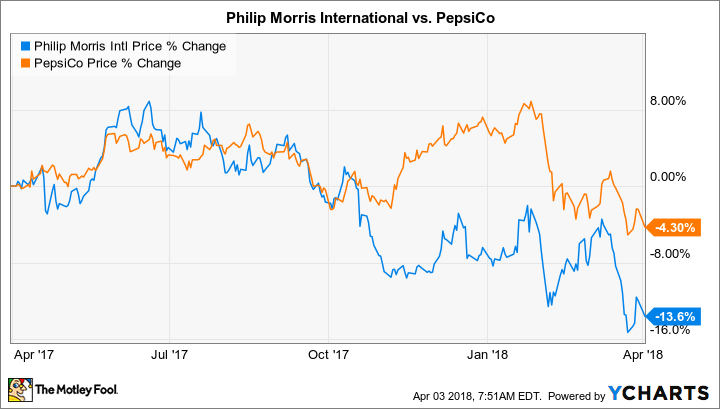 Based on those numbers, it'd be reasonable to think that Philip Morris is now more attractively priced in terms of valuation. Yet a close look at recent and projected earnings leads to a different conclusion. Backward-looking metrics indicate that Philip Morris has an edge, with a trailing earnings multiple of 25 compared to Pepsi's above-30 level. However, recent tax law changes have made trailing earnings suspect, and on a future-looking basis, both Philip Morris and PepsiCo have forward multiples of about 17. That leaves the two stocks very close to each other in terms of valuation and recent performance.

Consumer goods stocks tend to have attractive dividends, and Philip Morris and PepsiCo are no exception. However, Philip Morris has much higher payouts right now, yielding more than 4.25% compared to less than 3% for PepsiCo.

Despite its lower yield, though, the beverage and snack specialist has some advantages over its tobacco-producing peer. Based on current projections for 2018 profits, PepsiCo is paying out between 55% and 60% of its forward earnings as dividends, which is a quite sustainable rate. Philip Morris, on the other hand, has a much higher payout ratio of more than 80%. That limits the tobacco giant's ability to deliver growing dividends in the future. We've already seen the impact of that limitation, as PepsiCo announced a planned 15% dividend increase to take effect later this quarter even as Philip Morris' last dividend boost was only 3%. Those who appreciate future potential will like PepsiCo's dividend prospects better than Philip Morris' right now.

Both Philip Morris and PepsiCo face large challenges, as health advocates question the products that both companies make. Philip Morris has responded aggressively by fully embracing alternatives to traditional cigarettes, claiming that its long-term expectation is to phase out of the cigarette market entirely in favor of products like its iQOS heated-tobacco system. Philip Morris is convinced that scientific analysis will back its claims that reduced-risk products can limit negative health impacts while still offering an experience that smokers will appreciate, and early numbers from key markets like Japan have shown that consumers are willing to make the switch. Rivals are working hard to catch up, but iQOS has a lead that will be tough to overcome. 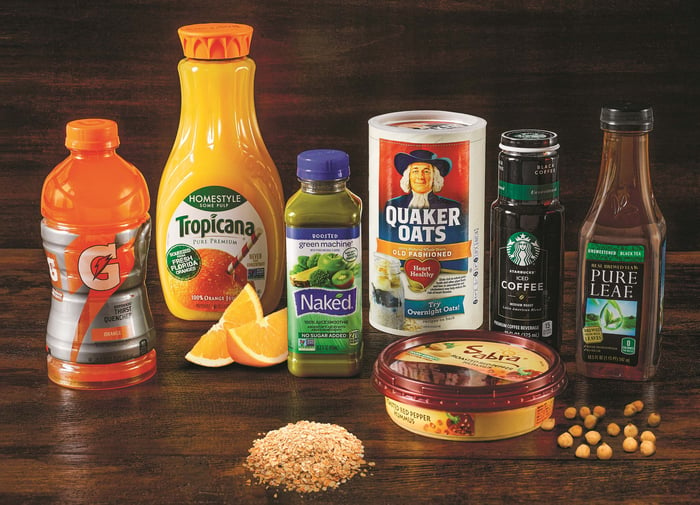 Most investors don't consider the health impacts of sugary beverages and snacks to be quite as severe as those of smoking, but that hasn't stopped consumer advocates from calling for PepsiCo to take steps to mitigate trends toward obesity and related diseases. That's required some finesse from PepsiCo, because consumers haven't entirely decided how far they're willing to go in the name of health in the food and drink category. PepsiCo has been an innovator in healthy snacks and has sought to offer beverages that appeal to a wider audience, going well beyond its namesake carbonated cola. With much stronger market share in snacks than in beverages, the Frito-Lay division could be PepsiCo's big growth opportunity for the future.

Right now, PepsiCo is the better buy between these two massive consumer companies. With a faster-growing dividend, clearer growth prospects, and a similar valuation, the beverage maker has a path forward that Philip Morris will have to work harder to match in the time ahead.