Shares of Philip Morris International (NYSE:PM) had a solid 2017, with share prices rising by 15% and helping to produce total returns approaching 20% for the international tobacco giant. That nearly kept up with the broader U.S. stock market, even though many investors are concerned about the deterioration of its cigarette business and its increasing reliance on the promise of reduced-risk alternatives to drive future growth.

In the year to come, Philip Morris International investors will need to keep their eyes on the massive changes happening in the industry right now. Despite the continuing success of the Marlboro brand in many areas of the world, Philip Morris will need t keep making progress throughout its business in order to follow up on its promise to transition away from traditional cigarettes in the long run. Here's a closer look at what we're likely to see from Philip Morris International in 2018.

What investors want from Philip Morris in 2018

Investors who are interested in Philip Morris have high hopes that the tobacco giant will continue to produce solid returns. The current price target among those following the stock calls for gains of between 18% and 19%, and a 4% dividend yield should bring total returns into the low 20%s if those price targets prove correct.

The big problem that Philip Morris faces is that it's unlikely to see a reversal in negative trends away from traditional cigarettes. One of the biggest challenges that the company faced during 2017 was that declines in shipment volumes accelerated. Early in the year, cigarette shipments fell at a greater-than-10% pace, and although its most recent quarter features a more modest 4% drop, Philip Morris hasn't been able to poach enough market share away from tobacco rivals to make up for the overall drop in demand that players throughout the industry have seen.

The tobacco giant has also had some issues in relation to pricing its premium products. In a conference presentation in November, COO Jacek Olczak talked about the difficulties it has dealt with in the Russian market, where delays in implementing desired price increase ended up being far longer than the company anticipated. More favorable conditions in the Philippine market helped to offset some weakness elsewhere and reversed poor performance in that country in past years, but Philip Morris will have to keep working hard to ensure it retains pricing power across all of its major markets internationally in order to meet future expectations for regular 9% to 10% earnings growth. 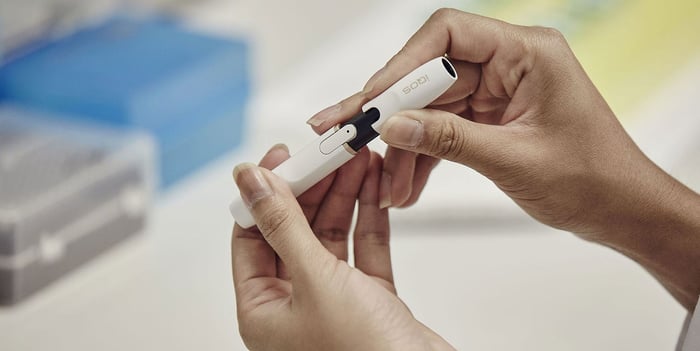 The transition to reduced-risk products

Most of the attention Philip Morris gets now is aimed at its iQOS line of heated tobacco products. 2017 was a blockbuster year for the products, as Philip Morris enjoyed monumental growth in the key Japanese market and also started to see more favorable results in other areas as well. Increased capacity for producing the tobacco HeatSticks that the iQOS system uses has put the company in a better position to allow demand for the alternative platform to build naturally without fear of shortages. That should in turn give Philip Morris a better sense of what the true growth potential for iQOS really is.

In the coming year, investors are increasingly hopeful that Philip Morris will make progress with its iQOS application before the U.S. Food and Drug Administration. The tobacco giant has looked to get the FDA to approve iQOS under protocols for modified-risk tobacco products, and it also wants to be able to sell the system in the U.S. market through a licensing agreement with former parent Altria Group (NYSE:MO). Altria would be the seller of the products domestically, but Philip Morris would be entitled to licensing revenue under their partnership agreement. There's no reason to think that iQOS wouldn't fare as well in the U.S. as it has in Japan, and so a lot is riding on gaining entry to the lucrative new market.

To be clear, iQOS isn't the only direction that Philip Morris is pursuing. Its overall reduced-risk product plan includes several other potential variations, including liquid-based vapors that have been popular among those seeking cigarette alternatives. Yet there's no reason to divert attention away from its successful heated-tobacco product until signs of competitive pressure demand a broader line of offerings for customers.

Philip Morris is in a good place right now, but it needs to keep up its momentum. FDA approval of iQOS in 2018 is the best-case scenario for Philip Morris as it looks at cementing its long-term future in a rapidly changing industry.