Philip Morris International (NYSE:PM) didn't have a blowout performance in 2017, but its 15% rise was a nice gain after years of more sluggish performance from the tobacco giant. For years, Philip Morris has had to deal with headwinds to its fundamental business success on multiple fronts, and although some of those challenges let up a bit during the past year, others remain a drag on share-price gains.

As many look toward what 2018 will bring for the Marlboro maker, the beginning of the year is a good time to look at what Philip Morris accomplished during 2017. By understanding how the company weathered difficult conditions, you'll be better able to see whether Philip Morris can build up even more positive momentum in the year to come. 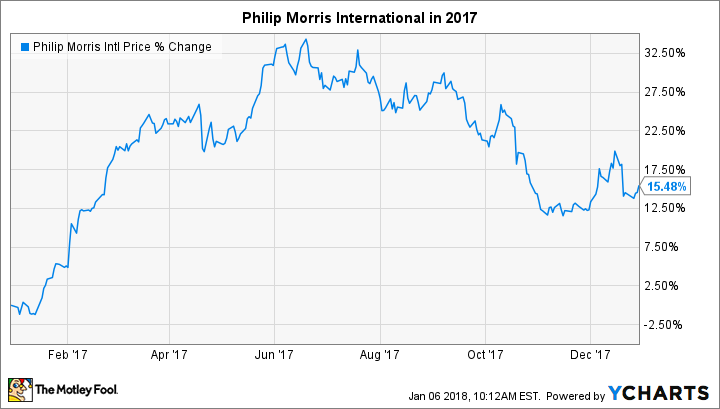 How 2017 began for Philip Morris

Coming into last year, Philip Morris faced a mixed outlook. Bulls hoped that the strong U.S. dollar, which had held back the company's financial results for years, would finally start to let up. From a longer-term perspective, Philip Morris also hoped to win regulatory battles, including a key approval for its pioneering reduced-risk product iQOS. Yet bears pointed to sustained weakness in earnings growth that had weighed on Philip Morris' ability to raise its dividend to as great an extent as it had in the past, and the potential for increased regulation in several international markets looked like a credible threat.

Financial results during 2017 didn't resolve Philip Morris International's business issues entirely. Toward the beginning of the year, it seemed as though adverse currency impacts would go away, as the company projected that even after a $0.13 per share hit to earnings in the fourth quarter of 2016, Philip Morris' bottom line would recover throughout the remainder of the year. That sent the stock to solid gains in the first quarter, rising as much as 25%.

Later on, though, new challenges appeared. Cigarette shipment levels plummeted far faster than many shareholders had expected in the first quarter of 2017, with a double-digit percentage decline that spanned the company's entire global market. By the second quarter, it became clear that Philip Morris wouldn't entirely avoid currency headwinds despite the strength of the euro against the U.S. dollar. By the third quarter, a nasty combination of bad trends in currency and shipment volume led to year-over-year earnings gains of less than 2%, with particular weakness in the European market. Although the stock initially weathered those negative news items and built up its rise for the year to as much as 35%, a downtrend throughout the remainder of the year cut those gains in half.

Dividend investors were once again disappointed by Philip Morris as well. The company announced just a 3% increase in its quarterly payout in 2017, raising the dividend from $1.04 per share to $1.07. That boost was greater than the 2% increases in each of the two previous years, but it was still a far cry from the double-digit boosts that investors enjoyed earlier in the tobacco giant's history.

The bright spot in Philip Morris' 2017

The one unquestionably bullish result from Philip Morris in 2017 came from its reduced risk product portfolio. The iQOS platform continued to gain ground in increased adoption during the year, and financial results did an impressive job of balancing poor performance in the cigarette market. Total shipments of heated tobacco units were up sixfold globally during the first nine months of 2017 to 20.5 billion, with European Union penetration up by 10 times its 2016 pace. Net revenues were up fivefold to nearly $2 billion, pushing reduced-risk product sales to nearly 10% of Philip Morris' total during the period.

Yet even with iQOS, things didn't go perfectly. To date, Philip Morris International hasn't gotten any word from the U.S. Food and Drug Administration about whether it will approve iQOS for marketing within the U.S. market. Such a move would prove a huge boon for Philip Morris, not only from the direct licensing revenue it would receive from iQOS sales in the U.S. but also because foreign regulatory agencies would likely follow the lead of the FDA in allowing its sale. The company didn't necessarily expect the FDA to act quickly enough to come to resolution in 2017, and it's still hopeful for action in 2018. Yet the delay is disappointing for those who see reduced-risk products as the future for Philip Morris.

In the year to come, what happens with iQOS and the FDA will have huge implications for Philip Morris' long-term future. Beyond that, investors will have to hope for dollar weakness and friendlier market demand for cigarettes for Philip Morris stock to stay on the rise.