Please ensure Javascript is enabled for purposes of website accessibility
Log In Help Join The Motley Fool
Free Article Join Over 1 Million Premium Members And Get More In-Depth Stock Guidance and Research
By Travis Hoium – Apr 3, 2018 at 7:02AM

The unmanned systems division is the standout segment of Kratos Defense & Security Solutions, but it may not be enough to make the stock a buy.

There aren't a lot of companies as well-positioned to benefit from the increase in drone usage in the military than Kratos Defense & Security Solutions, Inc. (KTOS -3.42%). The company makes aerial drones and unmanned ground vehicle technology among a suite of other defense and commercial products, and the entire drone market is growing in popularity because they reduce the risk of harm to soldiers.

If you're looking at Kratos' stock, it's the drone market that's front and center, but it's a small portion of the business and may not be driving revenue or profit growth as much as you might think. Despite riding the wave of drone growth, Kratos Defense & Security Solutions is far from a no-brainer stock buy. 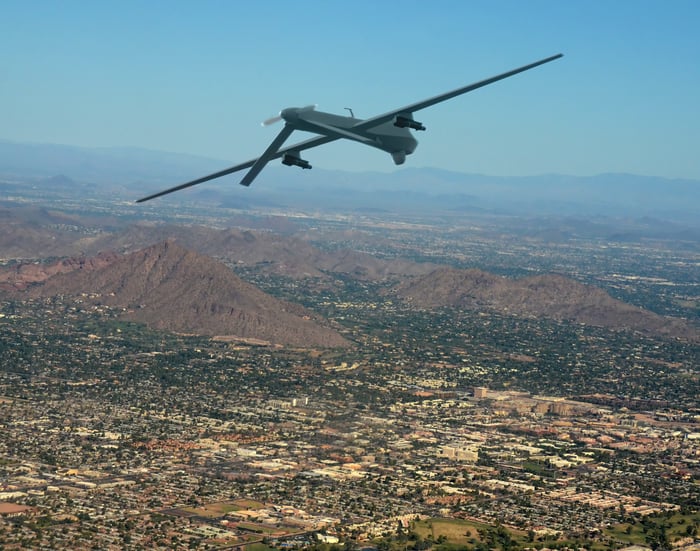 The financial snapshot is mixed for Kratos

You can see below that Kratos Defense & Security Solutions is back on a growth track, with revenue increasing 12.4% in 2017 to $751.9 million. The problem is that its net loss was $42.7 million, only a slight improvement from the $60.5 million it lost in 2016. A $17.3 million loss from extinguishment of debt skewed the numbers a little, but that's not enough to be profitable based on last year's numbers. 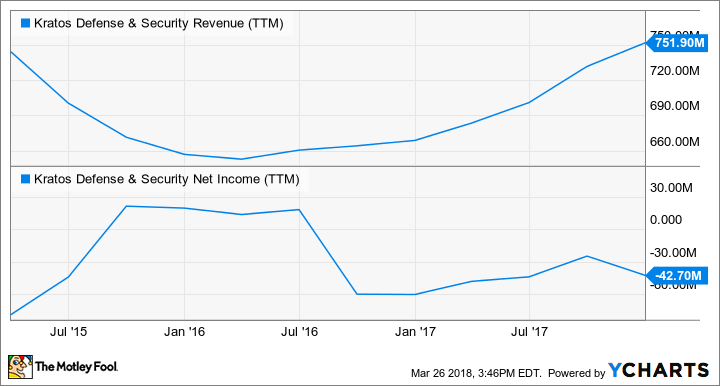 The challenge is twofold for Kratos in the long term. One is that gross margin is hovering in the mid-20s, leaving operating margins negative while defense contractors AeroVironment, Inc., General Dynamics Corporation, and Raytheon Company all have operating margins in the low double digits. 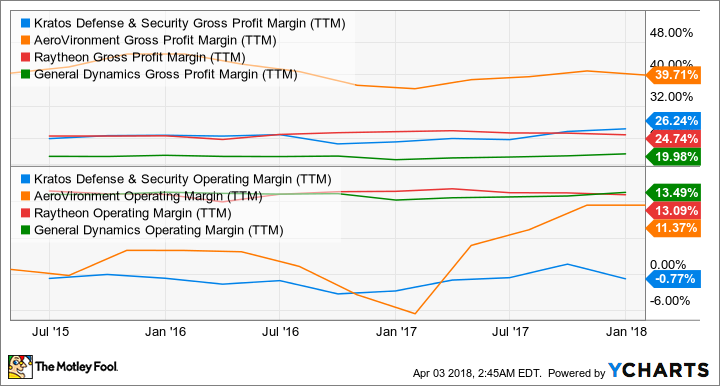 I will note that gross margins are in-line with larger contractors like General Dynamics and Raytheon, but Kratos doesn't have anywhere near the scale of these companies, who can spread operating costs over a much larger revenue base.

If Kratos is going to be a long-term, solid investment, the company is going to have to push its gross and operating margins significantly higher. Right now, I'm skeptical the company can get it up to where competitors are.

The highlight of Kratos' business right now is the unmanned systems division, which saw revenue rise 60.6% to $121.7 million in 2017. Adjusted EBITDA also improved sharply, jumping from 2.9% of revenue to 5.6% of revenue last year, or $6.8 million.

On top of the past strength of the drone business, Kratos won $221.3 million of contracts for unmanned aerial drones in just the first two months of 2018. By the look of it, 2017's momentum should continue well into 2018.

The challenge is that drones are only about 16% of Kratos' overall business and they have a long way to go to catch up to other segments and drive significant growth for the company overall. I'm also concerned that margins don't look like they're making the kind of uptick needed to make the company as profitable as its defense contractor peers. I would like to see more scale in drones and higher margins to think the company is going to be able to ride drone growth higher long-term.

The only business that really excites me from Kratos Defense & Security Solutions is the drone business and it's only a small portion of the total company right now. The 84% of the business coming from government solutions and public safety and security segments is growing more slowly and barely turning an operating profit right now.

Given the poor bottom-line performance, I don't think Kratos Defense & Security Solutions is a great buy for investors right now. A competitor like AeroVironment, which generates most of its revenue from drones, would be a better buy for investors looking to get into the military drone market. It makes smaller drones and isn't growing quite as quickly (36% growth in drone revenue in the past nine months), but it has better margins and has turned the corner to profitability over the last year, which I think makes the risk/reward more attractive to long-term investors.