Spring is in the air, and that should be good for the construction business -- should, but not will, according to Goldman Sachs.

This morning, the analyst climbed up on its soapbox and knocked down three key stocks tied to the fortunes of the construction industry. Whirlpool (NYSE:WHR) and Apogee Industries (NASDAQ:APOG) were cut to sell, while Owens Corning (NYSE:OC) got dropped to neutral. 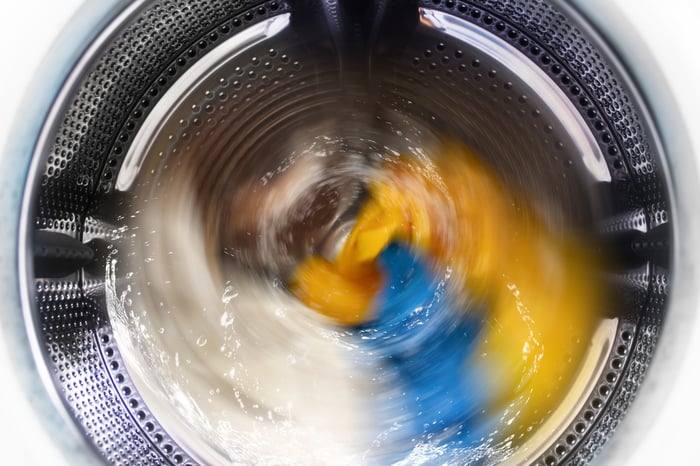 Let's begin with Whirlpool -- probably the best-known brand name among the three stocks downgraded today. As Goldman Sachs explains in a note covered on StreetInsider.com (subscription required) this morning, the construction industry is approaching its "mid-cycle," with less upside ahead of it than behind.

Whirlpool probably isn't the most obvious standard bearer for construction stocks. Still, given that new houses (and apartments) often need to be outfitted with new washers and dryers, you can see why Goldman Sachs would decide to include Whirlpool in its analysis of this industry. According to the analyst, Whirlpool faces problems in the form of "raw material inflation" (which compresses its profit margin on the costs side) and "higher competition" (which limits its pricing power on the revenue side).

Goldman Sachs now rates Whirlpool stock a sell, and with a $135 price target, appears to be expecting the stock to decline by about 10% over the next 12 months.

Private, non-residential construction, says the analyst, has been on a tear over the past five years, growing roughly 8% annually over this period. Unfortunately for Apogee, Goldman Sachs believes this growth "will flatten in 2018/19," removing a tailwind for the company. At the same time, and similarly to the situation with Whirlpool, the analyst warns that raw material costs and "elevated fixed-costs" will combine with greater competition to cause Apogee Enterprises' profit margin to disappoint going forward.

Indeed, Apogee's margin is already doing just that. According to data from S&P Global Market Intelligence, Apogee's gross profit margin has declined year over year in each of the past four reported quarters, and for 2017 as a whole, after climbing steadily for six years straight. Should 2017 turn out to be the first year of a new multiyear trend -- this one going down -- Apogee shareholders may find themselves headed for a new perigee in stock price.

Goldman Sachs rates this one a sell as well, and predicts Apogee shares will shed about 5% of their value over the course of the next year, falling to $39 a share.

Last but not least, Goldman Sachs says it's cutting its rating on insulation maker Owens Corning -- albeit only to neutral, and with a price target of $90 that actually seems to suggest that there's another 13% or so worth of upside to the stock.

So why downgrade it at all? Continuing its theme of margin worry, the analyst says it sees little room for Owens Corning to expand its profit margins in the near term, which limits its enthusiasm for the stock. In contrast, Goldman Sachs doesn't seem too concerned about the fact that Owens Corning's stock price has gained 33% over the past year.

Is that a mistake?

Valued at $9 billion in market capitalization, Owens Corning stock sells for an apparently rich price-to-earnings ratio of 31. The good news, though, is that Owens Corning is a powerful cash machine, generating $679 million in positive free cash flow (FCF) last year. Valued on these cash profits, Owens Corning sports a price-to-free-cash-flow ratio of only 13.2. Even dinging the stock for its $2.2 billion in net debt, Owens Corning's resulting enterprise value-to-FCF ratio of 16.5 doesn't look excessive in light of analysts' expected 15.1% growth rate and Owen Corning's modest 1% dividend yield.

In this case, Goldman Sachs' neutral rating is appropriate.

In both these cases as well, I can't help but agree with Goldman Sachs' conclusion: The stocks are too expensive and deserve to be sold.