Please ensure Javascript is enabled for purposes of website accessibility
Log In Help Join The Motley Fool
Free Article Join Over 1 Million Premium Members And Get More In-Depth Stock Guidance and Research
By Lee Samaha – Apr 4, 2018 at 8:02AM

Here are the warning signs that led to the company's difficulties and how they remain relevant today.

Everyone knows it's been a very difficult couple of years for General Electric Company (GE 6.20%). The stock has been down nearly 55% since the start of 2016 while its key European rival, Siemens (SIEGY 6.85%), has kept pace with the S&P 500 index's increase of nearly 35% in the period.

To understand what's gone on and what the future holds, let's take a look at the key events and problems and what GE needs to do from here. 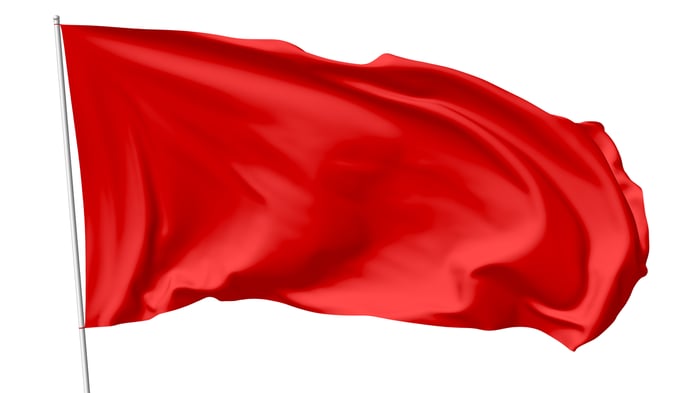 The warnings signs were there before General Electric Company revealed the extent of its problems. Image source: Getty Images.

The magnitude of the problems hit home for GE investors on the third-quarter 2017 earnings presentations: Management slashed full-year 2017 earnings-per-share guidance to $1.05- $1.10 from $1.60-$1.70 and industrial cash flow from operating activities (CFOA) guidance to $7 billion from $12 billion-$14 billion.

Nevertheless, the warning signs were in place well before it was forced to take a knife to its guidance.

Let's focus on these three key events and why they still impact the investment proposition for the stock today.

However, one reason GE's earnings in 2016 were within its original range is that management used the better-than-anticipated cash generation from GE Capital (a noncore activity from which GE has been selling assets) and industrial asset disposals to boost share buybacks. Specifically, the GE Capital dividend was $20.1 billion in 2016 -- $2.1 billion higher than forecast -- and dispositions totaled $4 billion,  or $1.5 billion above the midpoint of the forecast range of $2 billion-$3 billion.

GE then used the better-than-expected cash flow in 2016 to make share buybacks of $22 billion compared to the original plan for just $18 billion. Assuming the $4 billion in additional buybacks resulted in 135 million shares bought, and with 8.69 billion in shares issued at the end of 2016, my back-of-the-envelope calculations suggest GE's EPS got a 1.56% boost in 2016 simply from cash flow resulting from noncore activities like industrial asset disposals and GE Capital asset sales -- without this boost, EPS would have been at no more than the bottom of the range.

Even before the company began to dial down expectations for the power segment on the third-quarter presentations, the cracks were beginning to show. For example, GE Power shipped six units fewer than expected in the fourth quarter of 2016 -- large gas turbine shipments were 104 in 2016 compared to expectations for 110-115.

Moreover, a large part of the $1 billion shortfall in industrial CFOA in the first quarter of 2017 was down to the power segment -- receivables were $200 million less than predicted from the power segment, power orders failed to close, and there was $300 million less-than-expected from long-term equipment contracts and service contracts where GE had booked revenue but not received cash.

In short, GE made its numbers in terms of earnings but not quite in revenue and cash flow generation.

What it all means now

Unfortunately, these issues remain today and investors need to consider them before buying the stock. First, the power segment's problems are being addressed, but power end markets continue to go downhill -- Siemens' recent earnings did little to dispel this -- with further deterioration "into 2019," according to GE Power CEO Russell Stokes on a recent GE investment letter. GE Power's issues look likely to get worse before they get better so investors need to see some signs of stability before feeling completely confident.

Second, there is a deeper issue here: a Securities and Exchange Commission investigation into, among other things, how the company reported revenue and accounted for long-term service agreements in its power segment. As you can see above, GE faced significant pressure in meeting revenue and earnings targets in the last two years. Furthermore, revenue and earnings have been booked by GE without the corresponding CFOA dropping through.