GMS is taking Canada by storm.

Shares of U.S. wallboard and suspended ceilings systems distributor GMS Inc (GMS -2.36%) popped 13% in early trading Thursday and remained up 10.2% as of 2:40 p.m. EDT after announcing a large acquisition in America's neighbor to the north.

As announced earlier this morning, GMS has agreed to acquire 100% of the equity of Canada's largest wallboard distributor, WSB Titan, in a deal valued at $627 million. Commenting on the acquisition, GMS CEO Mike Callahan noted: "The acquisition of Titan further extends our leadership position as the largest wallboard distributor in North America with significant scale advantages and a well-balanced portfolio built for growth." In addition to being America's largest drywall distributor, GMS now will hold that title in Canada, as well -- and accordingly in North America as a whole.

The deal also will lend GMS a bit of geographic diversity. Up until now, the company had derived more than 99% of its revenues from just one country -- ours. Going forward, WSB Titan's $459 million in annual revenues will constitute 16.5% of total sales at the combined company. 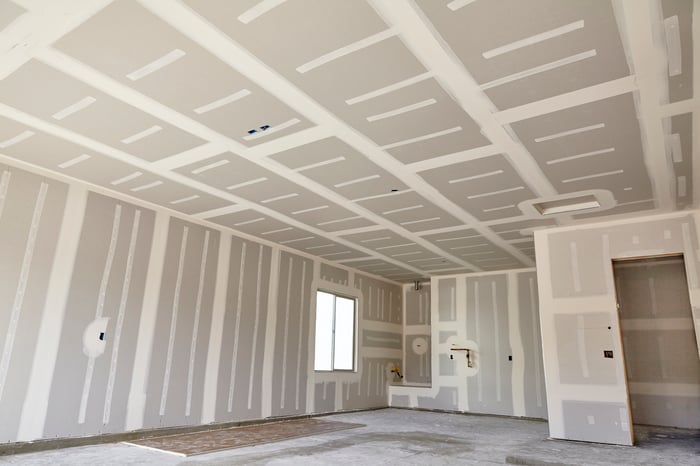 Rarely does drywall cause this much excitement. Image source: Getty Images.

Investors seem pleased with this prospect. They should also be pleased with the price GMS is getting. According to management, the $627 million that GMS will pay to acquire WSB Titan works out to a valuation of about eight times earnings before interest, taxes, depreciation, and amortization (EBITDA). That's a considerable discount to the nearly 10 times EBITDA valuation that GMS' own shares command -- indicating that GMS has snagged itself a bargain.

Investors are right to be bidding this one up.