Himax Technologies is sitting on a huge catalyst, but this doesn't make it a safe bet given a chequered past.

Himax Technologies (HIMX 0.39%) hasn't recovered from the beating that it took late last year after a negative research report from short-seller Citron Research. The chipmaker's fiscal fourth-quarter results haven't helped matters, either, as the weakness in Chinese smartphone demand weighed on its finances and guidance.

In all, there's a lot of negativity around Himax that's led to some investors selling their positions in recent months. While there's still one very good reason to consider Himax despite its recent troubles, investors may want to take a wait-and-see approach.

Himax has been betting big on the demand for 3D sensing chips in smartphones. In February, the company announced its 3D sensing chip solution -- SLiM -- for Android smartphones that will allow OEMs (original equipment manufacturers) to enable facial recognition and possibly other augmented reality (AR) solutions in the future.

Himax has developed SLiM in association with Qualcomm as a part of a partnership that was struck in August last year. Himax's new solution is all set to hit the market, with an initial production capacity of two million units a month, and is expected to be deployed by several Tier 1 smartphones OEMs in the first half of 2018 itself.

Himax claims that it has the "best performing 3D sensing and face recognition" solution for Android smartphones at present. This claim isn't outrageous since the company has already supplied its 3D sensing solution to enable the Face ID feature in Apple's iPhone X. As a result, Himax's smartphone revenue had shot up 30% sequentially during the third quarter that ended in September last year.

Himax is now looking beyond the premium end of the smartphone market as far as 3D sensing is concerned. The company is developing a low-cost alternative to enable facial recognition and other 3D features in mass-market Android smartphones, and it expects to start shipping this product by the end of the current fiscal year.

The adoption of facial recognition technology in mass market smartphones will be a boon for the industry. TrendForce estimates that sales of 3D sensing modules will grow from just $1.5 billion last year to $14 billion in 2020. Himax is well-placed to make the most of this opportunity thanks to its relationship with Apple and its moves into the Android market with Qualcomm.

The case against Himax

The problem with Himax is that it has a history of failing to deliver on their claims. The chipmaker was expected to win big from Alphabet's now discontinued Google Glass project, but it never materialized. Next, Himax made a lot of noise about augmented reality and expected Microsoft's HoloLens to bring some dough.

But AR technology has so far failed to take off as expected, and Himax has ended up paying the price. As it turns out, Himax is still feeling the effects of its failed AR venture in the form of the phasing out of some old customer programs that have been hurting its top line in recent quarters. Additionally, Himax management accepted on the latest earnings call that it has failed to convert some of its design wins into actual contracts.

In fact, Himax has failed to find a significant catalyst to boost its business in the past five years, as evident from the following chart: 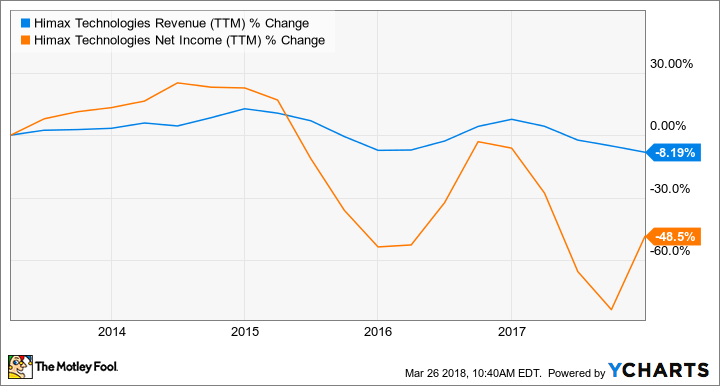 Finally, Himax's current valuation isn't enticing enough to make a bet on a turnaround -- it trades at 41 times last year's earnings as compared to the industry average price-to-earnings (P/E) ratio of 22.6. Additionally, the company recently raised its capital expenditure budget by 31% to $105 million to build capacity for meeting SLiM shipment demand, and it is yet to see the fruits of this labor.

This again brings a sense of deja vu as Himax had spent money, while also receiving an investment from Google, to build out capacity for the Google Glass five years ago. But those investments didn't ultimately deliver. So, if history repeats and Himax's new solutions don't take off, then its investments will go down the drain, and the stock could slide further.