Big opportunities lie ahead for this trio of growth stocks that are riding long-term global trends to achieve robust top- and bottom-line growth.

Growth is a tricky investment theme: solid growth stocks often don't become obvious until after the big growth opportunity is in the past. But that doesn't mean you can't find high-growth stocks that are only just getting started on big, long-term opportunities. You just need to dig a little.

We've uncovered three stocks that look like they have massive growth potential, as they take advantage of long-term trends. Take some time to get to know homebuilder LGI Homes, Inc. (LGIH 5.30%), industrial specialist Raven Industries, Inc. (RAVN), and water heater maker A. O. Smith Corporation (OHI 3.41%) and I think you'll find a stock or two that could fit in your growth stock portfolio.

Meeting demand for a new generation

Jason Hall (LGI Homes): For years, Millennials behaved in quite different ways than prior generations when it came to homeownership. This should hardly be surprising, considering that millions of members of this generation came of age during the worst recession and slowest economic recovery since the Great Depression. But in recent years, this highly educated, highly skilled segment of the population has started to come into its own. Millennials are becoming an economic force as they climb the career ladder and establish themselves. 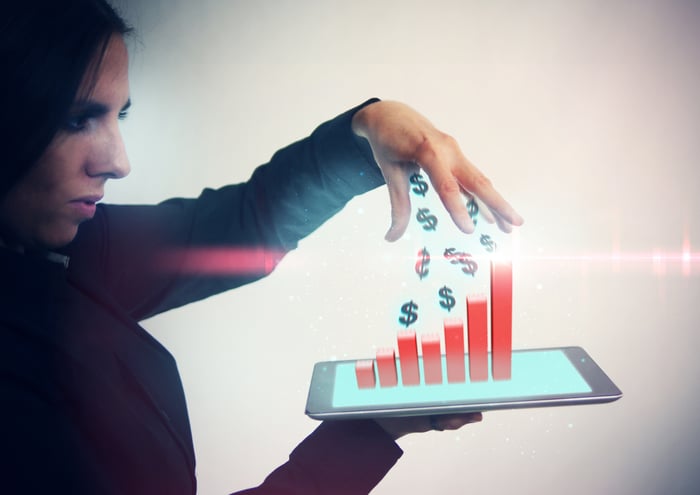 They've also started buying homes, but years of weak demand has lead to a dearth in supply of affordable starter housing for young buyers. That's created a wonderful opportunity for small builder LGI Homes to deliver huge growth in an underserved segment of the housing market. And it's paying off so far, with earnings per share up 73% on 69% revenue growth in the third quarter, while EPS jumped 54% in the fourth quarter on 62% sales growth.

Yet even with sales and profits surging higher, LGI Homes has a lot of room to grow much bigger. The company sold 5,845 homes in 2017, less than 1% of the 617,000 new homes sold in the U.S. last year.  I expect LGI's focus on the starter home segment to help it grow its market share substantially for many years to come as millennials steadily become a bigger segment of the homebuyer market.

Neha Chamaria (Raven Industries): Back in 2016, I wrote an article about the huge growth potential of drones in agriculture and spoke about how technology companies like Raven Industries are putting their weight behind the technology. Raven is not a drone manufacturer, but is into precision agriculture -- a modern farm management concept that uses cloud-based, computerized, and wireless systems to potentially revolutionize farming.

That, however, is just one of Raven's unique businesses, accounting for a third of the company's revenue in fiscal 2017. Raven is in fact a diversified company that started off as a manufacturer of high-altitude hot-air research balloons. Those balloons and aerospace radar systems, which comprise Raven's aerostar segment, contributed roughly 11% to its revenue last year. Raven's largest segment is engineered films, which makes polymer sheets and coatings used for industrial purposes such as lining landfills, silage bunkers, feed storage, and frac pits.

Raven has had its share of ups and downs, as it caters to cyclical industries like agriculture and construction, but these are high tech businesses with huge potential. And there's no mistaking Raven's growth opportunity.

For FY 2018, ended January 31, Raven reported a 36% jump in sales, backed by 50% growth from engineered films. Its net income doubled to $41 million. Even more encouraging, Raven is free-cash flow positive, pays a dividend -- the stock currently yields 1.5% -- and is debt-free. The stock has gained nearly 70% in the past three years, but this small-cap tech stock may have just gotten started.

Adding in the next Asian power house

Reuben Gregg Brewer (A. O. Smith Corporation): A. O. Smith's boring water heater business has grown earnings at a compound annual rate of 26% since 2010. That might come as a surprise, since water heaters are something you probably never think about. However, a little more than a third of the company's top line comes from emerging markets -- mostly China. In developing nations, water heaters are an increasingly affordable luxury that everyone wants. 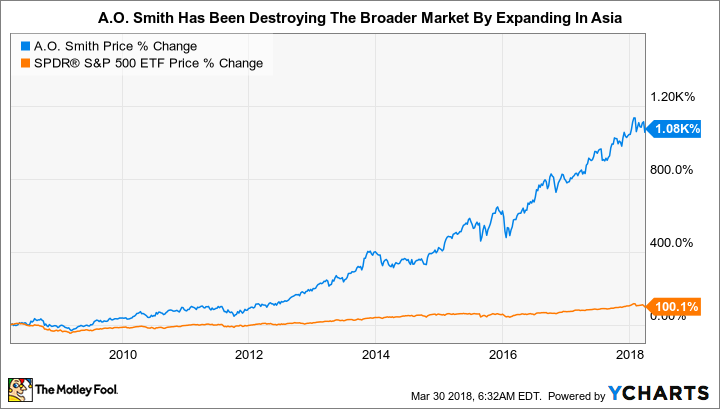 To put a number on that, A. O. Smith's sales in China have risen at a compound annual rate of 21% over the past 10 years. And now Smith is starting to push harder into India, another giant Asian nation with a population quickly climbing the socioeconomic ladder. It is also moving into the water and air purification markets, touching on two other things we often take for granted in the United States. These are all "mega trends," according to A. O. Smith, which is expecting to exploit them for many years into the future.

Looking forward, management is calling for roughly 8% top line growth over the next several years driven only by the business it owns today. Acquisitions could alter that number for the better. Although slow growth in developed markets will continue to be the core of the business, expansion in emerging markets is the key theme to watch, because it will be the company's growth engine. And with A. O. Smith only just getting started in India, the future still looks pretty bright from here.

The story behind the growth

When you look at LGI Homes, Raven, and A. O. Smith it should be pretty clear that the trends underpinning their growth are far from over. That's a key factor to consider when looking for high-growth companies. Indeed, these three companies appear to just be getting started on their paths toward higher sales and earnings. Take some time to do a deep dive on each name, and it's likely you'll consider adding at least one to your investing wishlist.