Please ensure Javascript is enabled for purposes of website accessibility
Log In Help Join The Motley Fool
Free Article Join Over 1 Million Premium Members And Get More In-Depth Stock Guidance and Research
By Steve Symington - Aug 23, 2019 at 8:00AM

The mini-industrial conglomerate had an even tougher-than-expected quarter. But it also sees sunnier days ahead.

Raven Industries (RAVN) released fiscal second-quarter 2020 results on Thursday after the market closed. With echoes of the near-term headwinds that laced last quarter's underwhelming report, the company detailed broad-based revenue and earnings declines from each of its three business segments. A closer look at Raven's results shows the brunt of the blame can be placed on its Applied Technology business, where an unusually wet planting season in the U.S. negatively impacted demand for its industry-leading precision agriculture equipment.

With shares of the mini-industrial conglomerate down around 4% in after-hours trading right now, let's take a closer look at what Raven had to say about its Q2 performance. 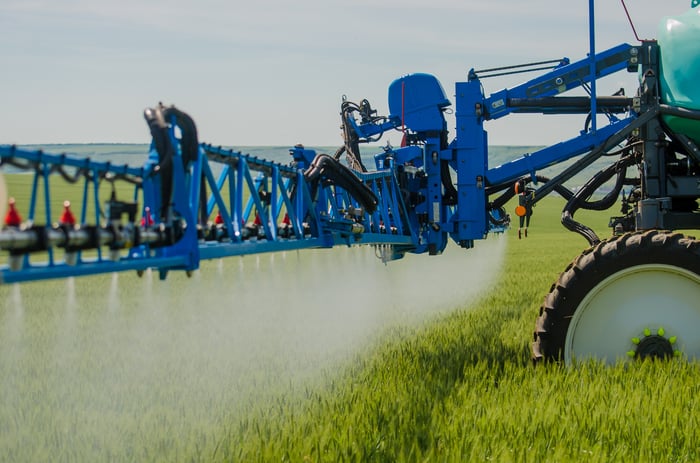 End-market conditions impacting our Applied Technology division during the second quarter were significantly more challenging than expected. Because of this and other challenges experienced in the first half of fiscal 2020, we have updated our previous expectations of achieving year-over-year growth in both sales and division profit for the full-year in each division. [...] While we will not achieve the growth in sales and division profit in every division this fiscal year as we previously expected, we do expect a stronger second half sales performance for each division, relative to the prior year. More importantly, I firmly believe we are much better positioned today to face end-market challenges due to the investment discipline we maintained during the previous end-market challenges we experienced. Our disciplined approach to continual investment is supported by the confidence we have in our ability to improve our market-leading positions and drive long-term growth.

That said, Raven Industries also expects OEM machine production rates to improve in the second half, which should help Applied Technology sales and profit to increase for the rest of fiscal 2020 relative to the same year-ago period. Raven similarly anticipates Engineered Films sales growth on a year-over-year basis in the second half, as past investments to capitalize on key growth opportunities begin to yield fruit. Finally, Raven's Aerostar segment is inherently less predictable, but the company believes its increased R&D investments should leave it well positioned for longer-term growth.

Still, until Raven's near-term headwinds abate, shareholders probably shouldn't hold their breath for the company to live up to its longer-term goal for achieving annual earnings growth of at least 10%. And I suspect the stock will remain under pressure until Raven Industries shows more tangible progress even returning to modest sustained, profitable growth.