Please ensure Javascript is enabled for purposes of website accessibility
Log In Help Join The Motley Fool
Free Article Join Over 1 Million Premium Members And Get More In-Depth Stock Guidance and Research
By George Budwell – Apr 9, 2018 at 6:00AM

Geron's risk-to-reward ratio might be too juicy to pass up.

Geron Corporation (GERN -1.74%) is a small-cap biotech developing the novel treatment imetelstat for myeloid-based malignancies with Johnson & Johnson. Despite a positive third internal review for the drug in its first two proposed indications -- myelofibrosis and myelodyspastic syndromes, Geron has remained a favorite target of short-sellers.

At last count, for instance, Geron's short percentage of its outstanding float stood at a noteworthy 21%, making it one of the most heavily shorted biotech stocks. While longs have taken umbrage to the shorts' unrelenting attacks, I think this outsized short position is not only misguided, but it has also inadvertently created an incredible buying opportunity for three reasons. Read on the find out more. 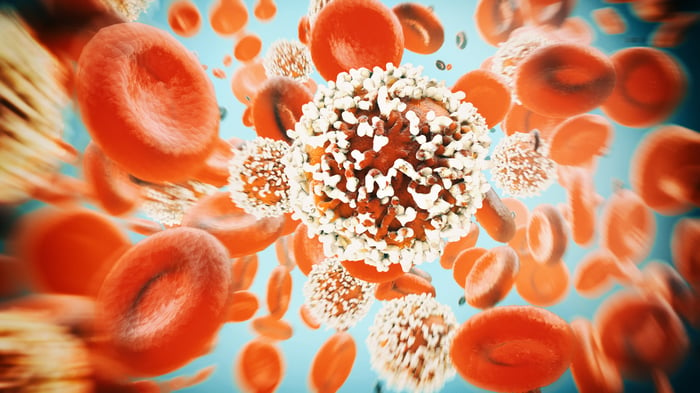 Reason No. 1: The short thesis is baseless

Geron's bears have attacked imetelstat's projected median overall survival of 22 to 24 months in the trial called IMbark based on two parameters regarding the enrolled patient population:

First off, ECOG performance status is a highly inexact prognostic tool in cancer research, and it's not even referred to in the vast majority of peer-reviewed studies of myelofibrosis for that very reason. Instead, the gold standard in myelofibrosis studies is the International Prognostic Scoring System (IPSS), or its dynamic upgrade known as DIPSS. Geron and Janssen, for example, required patients to be classified as DIPSS intermediate-2 or high-risk MF to be enrolled in IMbark.

IMbark enrollees also had to have documented progressive disease during or after being treated with Incyte's JAK inhibitor therapy Jakafi, and they had to be refractory or relapsed to Jakafi to boot.

Stated simply, these are patients that are headed toward full-blown bone marrow failure and no longer have any compelling treatment options in most cases.

Driving this point home, the peer-reviewed literature shows that only about 10% of these patients are even eligible for allogeneic stem cell transplantation (a potentially curative treatment) because of the serious risks involved, and a decent chunk of the select patients that do undergo such transplants do not survive the process.

The point is that the ECOG performance criticism is nothing more than a red herring. A cut-off of ECOG 2 was obviously used in this case because immobile patients cannot readily travel to a clinic to receive infusions of imetelstat -- not because Janssen and Geron were trying to skew the population toward healthier patients. It's a logistical issue and nothing more.

The peer-reviewed research, and the consensus among actual clinicians working on this subject, is that patients that meet these more exacting criteria necessary to be enrolled in IMbark have an estimated median overall survival of no longer than 16 months.

In fact, one of the most comprehensive studies on the matter published just last month in Annals of Hematology by Kuykendall et al. reported a median overall survival in patients that discontinue Incyte's Jakafi of only 13 months. So stating that imetelstat's projected median overall survival of 22 to 24 months is somehow not clinically meaningful in patients headed toward bone marrow failure is completely out of step with the peer-reviewed literature.

That said, shorts did try to parse the data further by platelet levels to perform an ad hoc analysis on the Newberry et al. article appearing in the journal Blood last year. So let's address that second line of attack now.

The Newberry et al. study reported that the median overall survival in patients that discontinue Incyte's drug also came in at a mere 14 months. But the data did seemingly reveal a protracted survival curve in patients with higher platelet levels. By extension, shorts argued -- without any real proof mind you -- that the IMbark patient population falls into this second tranche of patients, and therefore the extended survival period is nothing to write home about.

Unfortunately for shorts, this line of attack was completely dismantled last month in a paper by Hernández-Boluda et al. appearing in the Annals of Hematology.

This study quantitatively showed that once you account for the interaction among various parameters -- using a multivariate model -- that platelet levels do not significantly predict survival times across a whopping 544 patients with myelofibrosis aged 70 years or younger. Here are the results from that analysis: Platelets < 100 X 10^9/1, P-value = 0.07.

The bit ticket item here is that shorts were misled by the fact that the Newberry et al. article failed to take into account the co-variation among variables -- whereby leading to an overly strong -- and completely erroneous -- survival signal emanating from a patient's change in platelet levels. The Hernández-Boluda et al. paper shows shorts are dead wrong in their position.

Another big reason why Geron's stock is deeply undervalued relative to its competitors is because the company has done next to nothing to promote itself under CEO John Scarlett. The company doesn't put out press releases on a regular basis, Scarlett doesn't attend many investor conferences, and the Geron's investor relations department will only regurgitate what the company has stated in press releases.

To be fair, I think this lack of hype is by design. Geron, after all, was a dilution machine under the tumultuous leadership of Michael West and Tom Okarma, and the company now appears to be deeply concerned about potential lawsuits as a result.

That said, Scarlett has done a commendable job at increasing shareholder value, while minimizing dilution during his tenure, despite this lack of promotion. The following charts underscore this point nicely: 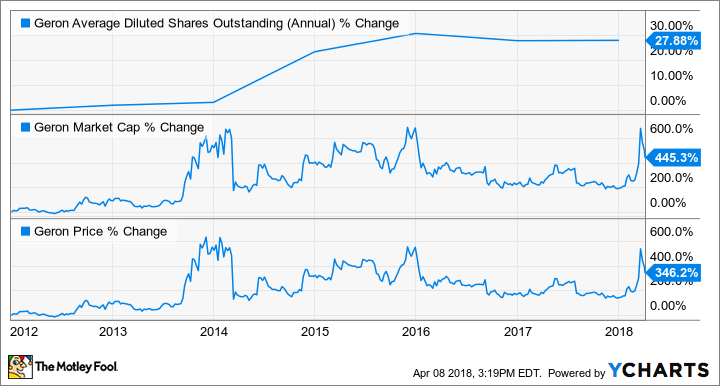 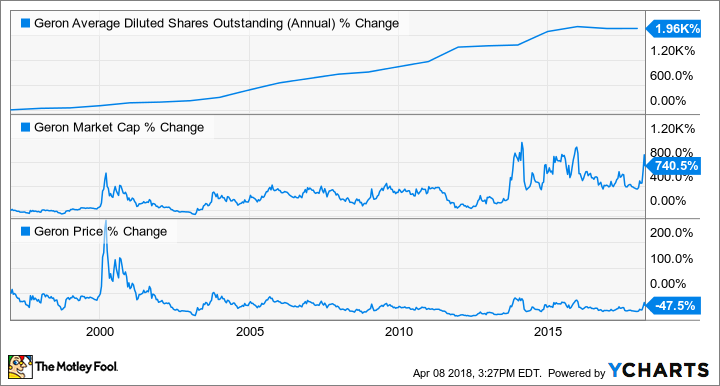 The take home point is that Scarlett has never hyped up the company to dump shares on unsuspecting investors like his predecessors. So, the insinuation by shorts that Geron is still working by the same playbook, and that imetelstat's median overall survival data are overstated in order to raise capital, is undercut by the company's recent history.

Like most clinical-stage biotechs, Geron is theoretically being valued by the market based on future profit projections, relative to its overall risk. Here's the thing about that: Geron's stock is trading as if imetelstat is almost certainly going to fail, when the emerging data strongly suggest otherwise.

Cutting to the chase, the market for novel blood cancer drugs and therapies has absolutely exploded in value over the last five years. For example, AbbVie paid a jaw-dropping $21 billion for a portion of Imbruvica's revenues; Takeda Pharmaceutical doled out $5.2 billion for Ariad Pharmaceuticals -- an acquisition that may never even produce $1 billion in annual sales; and Celgene just agreed to a $7 billion deal with Impact Biomedicines for a potential competitor to imetelstat that has a troubling side-effect profile.

So is Geron overpriced? The answer to that question all depends on your view of imetelstat's risk profile at this stage. Based on the peer-reviewed research, imetelstat is breaking records in terms of median overall survival for this sickly patient population.

Shorts have argued to the contrary, but their arguments are based on a faulty analysis, as shown above. In other words, imetelstat is no longer a high-risk asset after imetelstat's third internal review, and at best, it should be viewed at perhaps a medium risk level at this point.

Knowing that J&J views imetelstat's commercial opportunity as greater than $1 billion in myelofibrosis alone, Geron's risk-adjusted market cap should arguably sit at around $1.5 billion right now, not $560 million. Cancer drugs generally garner a minimum premium of three times peak sales in terms of valuation, after all, once they've been fully de-risked.

Geron's rock bottom valuation, however, seems even odder in light of the fact that the drug is showing tremendous promise as a front-line treatment in myelodyspastic syndromes -- an indication where the FDA granted imetelstat Fast Track status last October, and clinicians enrolled patients way ahead of schedule because of its presumed therapeutic effects. Front-line myelodyspastic syndrome is another billion-dollar indication, and imetelstat could end up gaining an accelerated approval for it within the next year.

Geron has been beaten down by short-sellers who have continually thrown shade at imetelstat's maturing myelofibrosis data and the company's management. In this article, I've tried to show that both of these arguments have no basis in reality. Imetelstat is bending the survival curve in advanced myelofibrosis in a favorable way, and the current management team has in no way acted against the interests of shareholders. The real-world data proves these points without equivocation.

Nonetheless, the short attacks have been enormously effective. On a risk-adjusted basis for just one of imetelstat's first two indications, for instance, Geron's shares should be trading at 167% higher than they are today. And if the drug hits the mark in both indications -- and the early signs are promising, Geron's stock is quite possibly trading at a staggering 81% discount on a risk-adjusted basis right now.

If you think those numbers are too optimistic, check out the premiums garnered by Ariad Pharmaceuticals, Impact Biomedicines, and Pharmacyclics (via AbbVie's buyout for Imbruvica) to name a few. Viewed in the backdrop of the prevailing trends within hematology, I think these estimates could turn out to be downright conservative.

In fact, I actually expect Geron's tender offer to include the value of imetelstat's prospects in not only myelofibrosis and myelodyspastic syndromes, but also in acute myeloid leukemia as part of a combination therapy with AbbVie's venclexta. Point blank: Geron, if all the stars align, could be worth around $8 billion in a takeover bid later on this year.

A meager $2000 investment at current levels would thus yield a return in excess of $24,500 in gross profits. That might sound crazy on its face, but early Pharmacyclics investors actually made out even better when AbbVie came calling, and Ariad Pharmaceuticals' former shareholders certainly aren't going hungry, either.

And as a reminder, these two blood cancer developers were also top targets of short-sellers right before they ended up being bought out at sky-high premiums. So Geron's exceptionally high short interest shouldn't necessarily be viewed as a negative, but perhaps as a strong counter-indicator.