The solar industry can be a fast-moving place for companies and investors. But it's a long-term, multitrillion-dollar opportunity, and any company that can build a lasting business could be a huge winner for investors.

As the industry evolves, companies who take the right strategy will be set up to succeed while those who take the wrong one may be doomed to failure. Here are a few trends I'm expecting to impact the fortunes of solar investors in the next few years. First Solar is going to get tariff-free competition in the U.S.

In the U.S., the last year in the solar industry has been dominated by rumors and then implementation of solar tariffs, which benefited very few companies. One winner was First Solar (NASDAQ:FSLR), the only company that had a large manufacturing presence here. The company took advantage of its tariff-free production by booking billions in future sales (7.7 GW booked in 2017) and locking up most of its production through 2019. But the days of being the only big tariff-free supplier may be coming to a close.

We know JinkoSolar (NYSE:JKS) plans to change that by building a $50 million module assembly plant in Florida, bringing one of the biggest global suppliers to the U.S. But the bigger disruption could come from SunPower (NASDAQ:SPWR), which is eyeing two manufacturing sites in the U.S.

SunPower would assemble its P-Series solar panels, which take solar cells from commodity suppliers from around the world, in the U.S. The company could use a 2,500 megawatt (MW) exemption for cells imported into the U.S. to produce P-Series panels, so these panels could potentially be produced tariff-free. That's a big deal for First Solar because we already know that SunPower's P-Series panels have and efficiency as high as 19.6%, according to data sheets, which is significantly better than First Solar's best line panel efficiency of 17% in the fourth quarter of 2017.

I think by the end of the year First Solar will have significant domestic manufacturing to compete against and SunPower is the most likely company to build capacity. That would be a big change from the last year when First Solar gained a windfall from pending solar tariffs.

In 2017, we saw energy storage creep its way into the solar market, highlighted by a few utility-scale projects and SunPower booking a $60 million pipeline of commercial solar projects. But in 2018, the industry should shift into high gear. 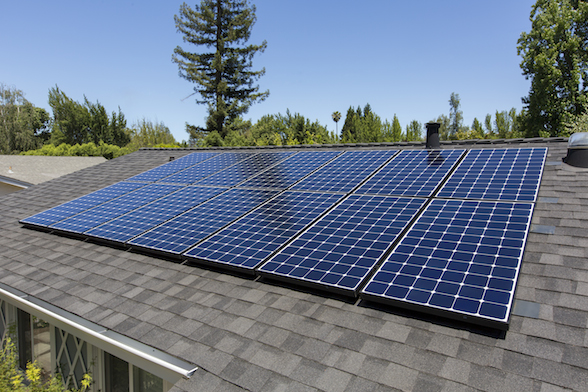 I think more and more commercial solar projects are going to include energy storage to save on both energy consumption and what's called demand charges (a fee based on a building's peak energy usage in a month). As evidence of the momentum, SunPower said during its most recent conference call with analyst that it's seeing a 30% attach rate of energy storage to commercial solar sales.

On the residential side, states across the country are starting to move to time-of-use rates, or charging customers different rates depending on the time of day they use electricity. In California, time-of-use rates make electricity more expensive in evening hours when the sun is going down, which is a perfect time for stored solar energy to fill in and reduce electricity bills.

Tesla is going to shrink into solar oblivion

Tesla's (NASDAQ:TSLA) buyout of SolarCity is looking worse by the day, highlighted by just 87 MW of solar installations in Q4 2017, down 57% from a year earlier. The solar business is slowly dying under Tesla and there's no indication we're in for a turnaround anytime soon.

Another reason I think Tesla's solar installations will fall this year is that its sales channels aren't proven yet. The company is shutting down door-to-door sales that made SolarCity the largest residential solar installer in the U.S. and moving sales into Tesla stores, which haven't proven the ability to sell solar at scale. After losing its No. 1 market share position in 2017, the company may fall to No. 3 or 4 in the U.S. residential solar market, behind Sunrun, Vivint Solar, and maybe SunPower, a shocking fall from grace for Tesla.

Nowhere in the world is the potential for solar energy bigger than the Middle East. The region has ample solar resources and an incentive to reduce oil consumption used for electricity generation, allowing the region to increase oil exports. It also has some of the lowest solar power purchase agreement rates in the world, recently hitting less than 2 cents per watt, cheaper than any other source of electricity for new power plants.

The Middle East has had some high-profile solar goals before -- namely, Saudi Arabia's $109 billion solar plan that's gone almost nowhere three years after it was announced. But the economics are now too good to ignore and as a sign of the potential of solar, Saudi Arabia recently signed a memorandum of understanding with Softbank to build 200,000 MW of solar in Saudi Arabia, or enough to power 32.8 million U.S. homes.

Solar energy in the Middle East is no longer about splashy headlines and unfulfilled promises; it's about dollars and cents. The oil and natural gas that powers most of the region is far more expensive than solar electricity, and that's what will drive installations, a trend I think will pick up speed quickly in 2018.

Who is positioned well for the future of solar energy?

There are four companies who I think separate themselves from the competition given the trends we're seeing in solar today. First Solar has a head start in the U.S. because of the fact that it isn't subject to tariffs, but it can also benefit from growth in regions like the Middle East where its thin-film technology outperforms the competition. And with a long history of profitability (something few solar companies can claim), First Solar will likely be a winner long-term.

SunPower will benefit from the integration of solar and energy storage, something it's been working on for years. If it can also add a U.S. manufacturing facility we could see this become a preferred supplier for utility-scale solar developers as well.

Finally, Vivint Solar and Sunrun are benefiting from Tesla's shrinking solar business and should also build a competitive advantage as customers begin to combine rooftop solar with energy storage. They're well ahead of small, regional installers in developing energy storage and they should be able to exploit that advantage as customers demand storage with solar in the future.