These companies have what it takes to be multi-baggers for long-term investors.

Monster stocks can come in all shapes and sizes, but the key thing I look for is a killer product in a market that has a lot of growth potential. From there, it's a matter of balancing the risk any stock faces with the potential reward from an investment. 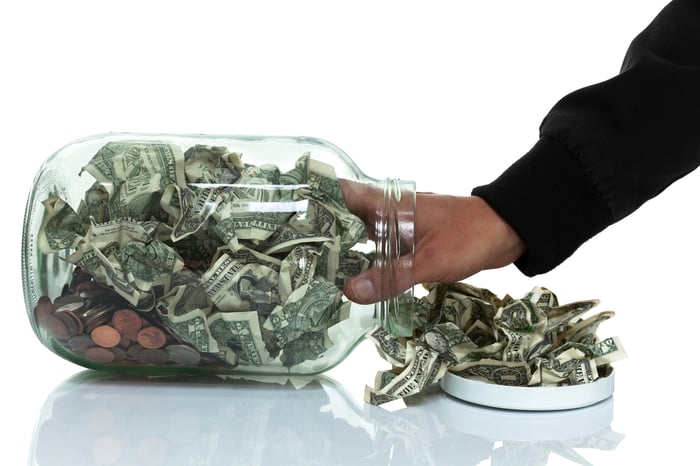 Tasers and body cameras are both law enforcement tools that are growing in popularity due to the public calls for fewer lethal weapons and more accountability. For Axon Enterprise, the result is a booming business as it provides solutions to the market.

In 2017, taser sales rose 15.7% to $234.5 million, and body camera revenue jumped 66.6% to $109.3 million as more law enforcement agencies around the world adopted the products. But management thinks its addressable market is worth $2.9 billion annually if it can reach the approximately 10 million law enforcement officers worldwide, so the company is just scratching the surface of its potential.

In 2018, we'll see the product line expand to include a holster than turns body cameras on when a weapon is drawn, a camera for auto fleets, and a records management system that would make the body camera central to an officer's data recording process. Management says product expansion should increase the total addressable market to $6.5 billion and bring in more revenue from existing customers.

I think body cameras will become an increasingly important tool for law enforcement and public safety, and Axon Enterprise is a clear leader in the market. Its cameras and cloud platform are well positioned for long-term growth, which could make this a monster stock for investors.

Video games have been a huge business for decades, but the last few years have taken the industry to a new level. Mobile games have brought games from consoles and PCs to mobile devices that over a billion people have around the world, opening new revenue opportunities. Market intelligence company Newzoo estimates that in 2017 mobile gaming revenues were over $50 billion, larger than both PCs ($32.3 billion) and consoles ($33.3 billion).

Take-Two Interactive isn't yet a leader in mobile or esports games, specializing in console games like NBA 2K and Grand Theft Auto. But it's investing in new products that could expand the revenue opportunity. In esports, it has a partnership with the NBA to create an esports league; management said it would begin taking esports more seriously late in 2017. The company also bought Social Point to expand mobile game exposure, which has been largely untapped by traditional Take-Two Interactive games.

There are bigger companies in video games, but Take-Two Interactive may have more upside given its late but notable entry into mobile and esports. That's what could make this a monster stock.

Mobile point-of-sale system Square is well-known for the credit card readers that have turned smartphones and tablets into payment processors, but the company's real strength is as a platform small businesses can build on top of. Point of sale may be the visible component for customers, but the company does payroll, inventory management, and even small business loans.

The reason Square is potentially a monster stock is that its position as a small business platform could allow it to benefit from scale. A growing list of customers allows the company to invest in more capabilities that will make it more attractive for the next small business. Square is even moving upstream, increasing gross payment volume (GPV) from sellers with over $500,000 in annualized GPV from 13% in Q4 2015 to 20% in Q4 2017. The capabilities Square is building is starting to attract larger (still small) businesses. As its scale grows, the company is even moving into peer-to-peer payments in Square Cash, which could allow it to eventually break free of bank and credit card fees that are costly for mobile payments.

I think enabling small businesses will be a powerful platform for Square, and the market potential for this company keeps growing as it builds out capabilities to serve more companies.

Few industries have as much potential as solar energy. The sun is by far the most abundant source of energy on earth, and the opportunity for solar energy could be worth trillions of dollars.

One of the industry's leaders is SunPower, the high-efficiency solar panel manufacturer. SunPower is a leader in residential and commercial solar systems, which leverage its high-efficiency panels to squeeze more power from a roof than competitors. The company is also rolling out energy storage for both markets, which gives customers more control over their energy usage and cost. Overall, these two markets are the core business for SunPower, but they're not what will drive growth.

What could make SunPower a monster stock is utility-scale solar, where it's invested in a new panel design called P-Series, which uses commodity solar cells and stacks them like shingles to make a panel that's slightly more efficient than competitors'. The panel is then combined with trackers that follow the sun and a design system developers can use to maximize their solar installations on a plot of land to create a system called Oasis. It's Oasis that's highly scalable with very little capital investment on the part of SunPower.

When looking at companies that could be behind monster stocks, it's important to remember that the ride won't always be easy. Companies with a lot of growth potential are often very volatile and can have big down days just as easily as up days. But over the course of many years, these companies are positioned well to provide great returns to your portfolio.