Shares of AeroVironment (AVAV -5.01%), a maker of small drones, jumped nearly 20% in early trading Wednesday, before settling back to enjoy a still respectable 15.9% gain as of 2:40 p.m. EDT.

For this, you can thank the friendly analysts at Stifel Nicolaus, who upgraded AeroVironment stock to buy this morning. 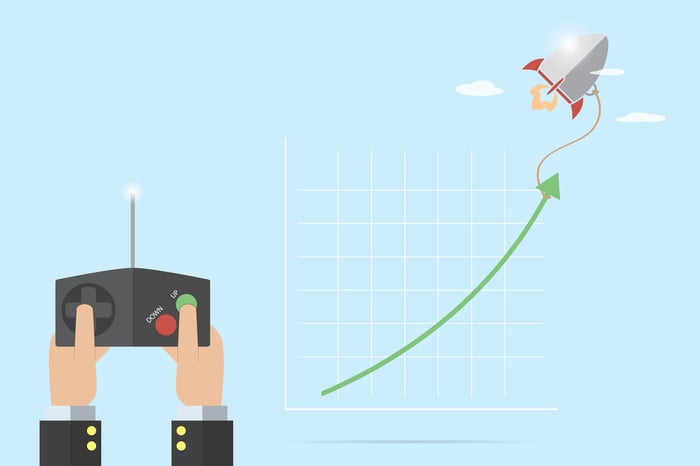 As explained in its write-up, Stifel believes that AeroVironment stock -- which cost a little over $46 a share before today's upgrade, and is selling for closer to $54 right now -- is poised to enjoy 12 to 36 months of strong sales growth as the Pentagon ramps up U.S. defense investment. Stifel expects AeroVironment to benefit from this increase in defense spending, particularly as the military finds new ways to make use of the company's innovative "Switchblade" drone.

Switchblade, described as a "loitering munition," is a sort of hybrid between a drone and a missile, incorporating both visual sensors enabling an operator to see a target and guide the drone to it, and a small warhead that the operator can detonate when the drone reaches its target. Switchblade has been in use by the U.S. Army for years; earlier this week, AeroVironment revealed a new partnership with the U.S. Navy.

The Navy plans to use Switchblade along with AeroVironment's Puma surveillance drones to create a "sensor-to-shooter" system for defending naval warships from attacks by small, fast-moving attack boats, such as those Iran's Revolutionary Guard Corps employs to harass Navy ships in the Persian Gulf.

Switchblade isn't the only arrow in AeroVironment's quiver. In fact, Stifel notes in its report today that AeroVironment boasts "as strong a pipeline of opportunities we've seen in our ten years covering [the company]."

Stifel isn't alone in feeling this way. Analysts in general are optimistic about AeroVironment's business, predicting an average of 20% annualized earnings growth for the company over the next five years, according to data from S&P Global Market Intelligence. Granted, it's an open question whether even that rate of growth can justify AeroVironment's expensive valuation, with the stock now trading for more than 40 times earnings as investors bid it up in reaction to Stifel's upgrade.

At a PEG ratio that has now hit a whopping 2.0, I can't help but wonder if the "easy money" on this upgrade has already been made.