The container ship leasing giant has had lots of news in the past few months, but the stock has yet to budge.

Seaspan Corporation's (ATCO 0.36%) stock has been very volatile this year, initially rebounding double-digits before plunging and then subsequently recovering. However, despite all of the movement, the stock is flat since the calendar flipped the page to 2018. In fact, it's been flat since I last pondered whether the stock was a buy, in early October. However, plenty has changed since that time, making it worth another look.

Seaspan has reported earnings twice since early October. At the end of the month, the company announced third-quarter results, which, while down versus the prior year, showed improvement versus the previous quarter. The company also unveiled who would take over the reins from retiring CEO Gerry Wang by naming Bing Chen as his replacement. Chen, the former CEO of BNP Paribas (China), led the bank's growth strategy in China. Meanwhile, in January, the company reported fourth-quarter results. While revenue was higher, earnings continued sinking, though that was partially due to the severance package paid to the outgoing CEO. 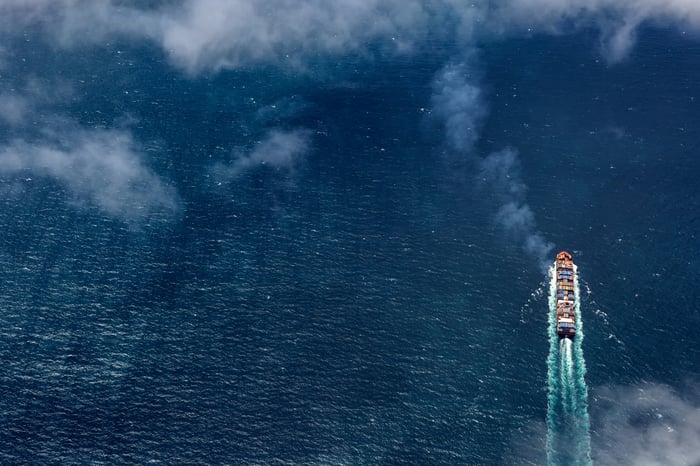 In addition to those improving financial results, the company also announced several strategic moves. Earlier this year, Seaspan secured a $250 million investment from Fairfax Financial Holdings Limited (FRFHF -1.21%). Not only did that deal provide the company with a boatload of cash with which to fund its growth initiatives and repay debt, it brought Fairfax Financial's well-regarded CEO, Prem Watsa, on board as an investor.

The company would go on to use that money to make two acquisitions. In February, the company announced the purchase of two small containerships that it immediately leased to shipping giant Maersk under a four-year contract. Then, in March, the company made the deal investors have been waiting for by acquiring the 89% stake in Greater China Intermodal Investments (CGI) that it didn't already own for $330 million in cash and $50 million of preferred shares. "This is the right transaction at the right price," according to CEO Bing Chen. It's also a needle-moving one for the company and should bolster earnings per share by at least 20% over the next year. The deal also won Fairfax Holdings' approval since it agreed to invest another $250 million into Seaspan in 2019.

The CGI deal is "the next step in our strategy," according to Chen, who sees it not only delivering accretive growth in the near term, but also allowing the company to "drive consolidation in a fragmented containership sector." The company noted that even though it's the largest independent containership owner in the world, with 112 vessels, it only controls 8% of the market.

In the meantime, though, the company needs to delever its balance sheet after swallowing CGI. That deal will push its net debt-to-EBITDA ratio to about six times, and net debt-to-equity to about two times. That's at the high end of the company's comfort zone, which is why it wants to get those ratios down to five times and one-and-a-half times, respectively, in the near term. The company plans to achieve that goal by using cash flow to pay off debt. Though, that focus on de-leveraging won't impact the company's ability to make acquisitions if they're highly accretive to earnings per share. The company is "not in a hurry. We've got very patient capital. Having said that, if the acquisitions come along in a more timely way, we'd be happy to do them. But, we're only going to do them on an accretive basis," according to Board Chair David Sokol.

A better opportunity for the same price

The GCI deal is significant for Seaspan since it should meaningfully move the needle over the next year, likely boosting earnings per share more than 20%. Add to that the steady increase in its legacy business due to the recovery in the shipping sector, and Seaspan's financial results should be much better this year, which could lift its stock price. While shares might remain volatile in the near term, this looks like it could be an excellent entry point for long-term investors who have the iron stomach needed to wade into the turbulent shipping sector.