Shares of Himax Technologies (NASDAQ:HIMX) lost 24.6% of their value in March, according to data provided by S&P Global Market Intelligence.

The imaging sensor chip company's shares lost value following unfavorable ratings coverage and the announcement of an acquisition. Himax Technologies is a small cap company with a market capitalization of roughly $1.2 billion and an uncertain business outlook, so its stock is prone to big swings in relation to news and ratings coverage. 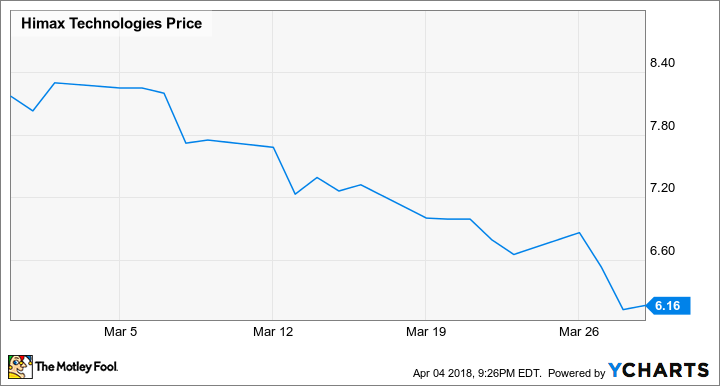 Shares also fell on March 29, following the news that Himax had exercised an option to complete its acquisition of Emza Visual Sense -- a company that designs sensor chips for Internet of Things devices.

Himax has bounced back from its March slump, with shares up roughly 17% in April so far thanks to some positive ratings coverage. The company has a growth catalyst on the horizon if variants of the facial-recognition technology that was a component of Apple's most recent iPhones become more widely adopted in Android mobile devices.

Recent volatility in the stock is tied to shifting outlooks on that front, and how demand shapes up for these products will likely be the key factor in the company's near-term stock performance. There's not a whole lot of visibility as to how that will play out, so Himax should be approached as a high-risk, high-reward investment. Shares trade at roughly 46 times this years expected earnings.