Please ensure Javascript is enabled for purposes of website accessibility
Log In Help Join The Motley Fool
Free Article Join Over 1 Million Premium Members And Get More In-Depth Stock Guidance and Research
By Rick Munarriz – Apr 14, 2018 at 11:00AM

China's second-largest search engine has been a broken IPO since shortly after its debut five months ago. I don't mind a fixer-upper.

The market has cooled on Chinese dot-com stocks in recent months, but I'm not the market. I initiated a position in Sogou (SOGO) earlier this month. China's second-largest search engine went public at $13 in early November, and after an initially warm investor reception, the stock started to break down. It's been a busted IPO -- trading below $13 -- since late November.

Things haven't gotten any better in 2018, and the shares have been trading exclusively in the single digits for the past two months. I bought in last week, so I may as well go over the reasons why I'm buying into a growth stock with an ugly chart through its first five months of trading. 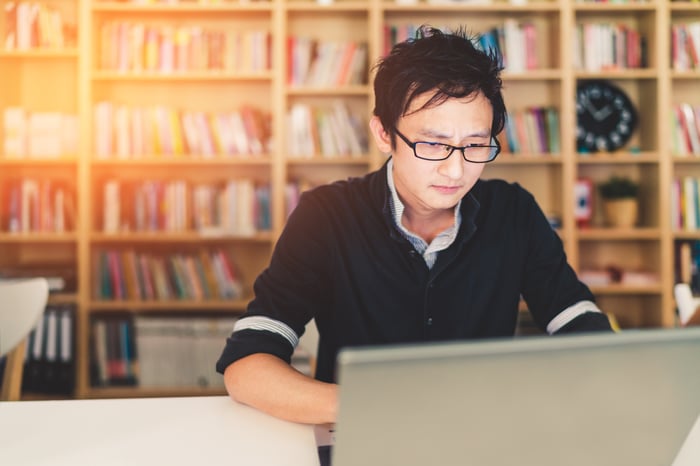 I've been covering Sohu.com (SOHU -1.17%) for awhile, so when the Chinese internet pioneer announced plans to spin off Sogou, I was more than a little interested. Sogou has been the main growth driver at Sohu for years. With Sohu's online advertising business meandering and its internet gaming business proving volatile, search has been its crown jewel.

Sogou's outlook in late January calls for $218 million to $228 million for the first quarter. The sharp sequential drop-off isn't a good look, but this is a seasonal business where the first quarter is typically a step back. The deal breaker here is that Wall Street pros were bracing for $241.1 million in revenue.

The market will clobber a company for lackluster guidance, but keep in mind that Sogou is still eyeing 35% to 41% in year-over-year growth for the first quarter that just ended two weeks ago. That's a pretty healthy growth rate, deceleration notwithstanding.

Sogou is a distant silver medalist to Baidu (BIDU -0.20%) in the realm of Chinese search engines, but there's plenty of paid search revenue and user query requests to go around. Baidu has been one of the market's biggest winners since going public -- a juicy 85-bagger since hitting the market at a split-adjusted $2.70 per share 13 years ago.

Sohu spun off Sogou at the worst possible time. Baidu shares had peaked a month earlier, and investors have been steering clear of Chinese growth stocks as fears of a trade war with the U.S. mount. Baidu is trading 17% below its October highs.

Baidu should bounce back, since that's just what elite growth stocks do. When investors warm up to the former dot-com darling again, they may very well fall for Sogou, too.

Sogou is actually growing faster than Baidu. Analysts rallied when Baidu reported its fourth-quarter numbers, applauding guidance calling for top-line growth of 25% to 32% for the first quarter -- or 29% to 36% once you back out the businesses it sold off to focus more on search. Sogou is already a pure search play, and as disappointing as its 35% to 41% growth guidance for the first quarter may have seemed, that's ahead of Baidu's forecast.

3. Sogou is cheaper than you think

Analysts aren't very impressed by Sogou so far in its rookie season. Han Joon Kim at Deutsche Bank initiated coverage of the stock last month with a hold rating and an $8.20 price target that's just below where the shares find themselves now. He feels that its valuation doesn't leave a lot of room for error, but it's not outlandishly priced.

Baidu trades at higher multiples, and as the market darling, its premium is well-earned. However, if you back out Sogou's more than $1 billion in cash and negligible debt to arrive at an enterprise value of $2.3 billion, the multiples become even more attractive.

There aren't a lot of investors in the Sogou Fan Club right now, but I don't mind being a contrarian. I'll wait.