Please ensure Javascript is enabled for purposes of website accessibility
Log In Help Join The Motley Fool
Free Article Join Over 1 Million Premium Members And Get More In-Depth Stock Guidance and Research
By Matthew Cochrane – Apr 15, 2018 at 7:15AM

Here's the latest example of how micropayments are benefiting the payments ecosystem.

Imagine this scenario: You, a casual sports fan, are sitting home bored, aimlessly surfing the web or flipping channels between the latest political news and a documentary you keep trying to convince yourself that you should be interested in. Your favorite basketball team is not playing this particular night but is in the middle of playoff race for that magical fourth seed, ensuring it would have home-court advantage for at least one playoff round. Then your phone buzzes: A game that directly affects your team's playoff seeding just entered the fourth quarter with the score tied. For just $0.99 you can stream the rest of the game to your phone. Do you want to watch?

That exact scenario played out to thousands of sports fans last month when the NBA began experimenting with streaming options available for less than a dollar. Next year, the NBA will roll out these streaming options to its fans in a bigger way. Fans may receive push notifications for games with playoff implications, close rivalry games, or heroic games where their favorite players are on the verge of setting individual records.

NBA Commissioner Adam Silver has long teased this idea. Two years ago, at the Consumer Electronics Show, he said, "I think you're going to get to the point where somebody wants to watch the last five minutes of the game, and they go click, they'll pay a set price for five minutes as opposed to what they would pay for two hours of the game." 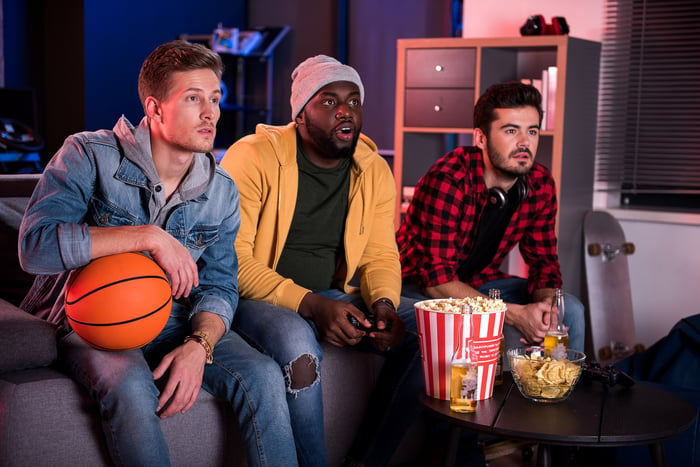 Casual fans might not subscribe to an expensive, all-access pass, but they might be enticed to watch the end of a close game for a small price. Image source: Getty Images.

Micropayments are bigger than just basketball

While the NBA might be near the forefront of utilizing micropayments, they are far from the first and won't be the last. It is easy to imagine other major sports moving to this same model. While diehard fans might not be reluctant to pony up the money necessary to pay for a league's season TV package, casual fans usually are. These smaller transactions represent ways sports leagues can monetize a much larger fan base without losing the revenue from selling their much more expensive, all-access packages.

Of course, the world of micropayments goes far beyond watching sports on television. It doesn't take much imagination to envision a future in which consumers pay a quarter for every article they read instead of paying a recurring monthly digital subscription to their favorite publication. Much to gamers' chagrin, video games are experimenting more and more with smaller, in-game purchases, too. Whereas drivers used to carry a few quarters in their vehicles to feed parking meters, many of these transactions are now being digitally facilitated as well.

The winners and losers of micropayments

The micropayments trend has implications for consumers and investors alike as consumers should have less expensive and more options than ever before. Eventually, these types of transactions will lead to a diminished use of cash and checks, allowing companies in the payments ecosystem to thrive. This means good things for obvious winners like Mastercard Inc (MA -1.17%), PayPal Holdings Inc (PYPL -2.29%), Square Inc (SQ -5.40%), and Visa Inc (V 0.44%), as well as other companies with digital payment platforms such as Apple's Apple Pay and Alphabet's Google Pay.

Visa CFO Vasant Prabhu specifically called out smaller transactions as a major growth driver for his company in the years ahead at an analyst conference last year. He said:

There are plenty of other winners, almost all at the expense of cash and checks. Two of consumers' favorite places to pay with cash are at coffee houses and fast food joints, according to the 2017 TSYS U.S. Consumer Payment Study. Yet smart players in the industry, like Domino's Pizza and Starbucks, have found ways to entice customers to pay via apps, rather than at the point of sale. This not only increases the chance customers will spend more per transaction, but also gives the restaurants crucial data on their most loyal customers.

The world seems to be moving toward an economy featuring a whole subset of transactions requiring micropayments. Companies earning revenue from the use of their payment network, such as Mastercard and Visa, will obviously benefit from this trend. Digital payment platforms, like PayPal's core service and Venmo and Square's Cash App, will all be used more to facilitate these payments, driving user growth and engagement. Finally, as more transactions become digitized, the more likely platforms like Apple Pay and Google Pay will finally find some real traction with users.

Savvy investors hoping to beat the market need to look for trends that companies can capitalize on. The war on cash and the rise of digital payments is one large development that is fairly easy to observe and still has a long runway left.