Please ensure Javascript is enabled for purposes of website accessibility
Log In Help Join The Motley Fool
Free Article Join Over 1 Million Premium Members And Get More In-Depth Stock Guidance and Research
By John Rosevear – Updated Apr 18, 2018 at 9:17AM

Here's what is really happening to GM's Chevy sedan lineup, and why.

Earlier this month, The Wall Street Journal reported (subscription required) that General Motors (GM 8.91%) will soon discontinue production of the small Chevrolet Sonic hatchback, and that it's considering ending production of its big Chevrolet Impala sedan as well.

That had investors and analysts buzzing: Is GM getting rid of its car models?

As if to answer, GM announced two days later that all of its other mainstream Chevrolet sedan models will get updated styling for 2019.

GM has said that it will reduce its investments in car models while boosting spending on trucks and SUVs. But it isn't getting out of the mass-market sedan business -- far from it. Here's a model-by-model look at what GM is planning for its Chevy sedans, and why. 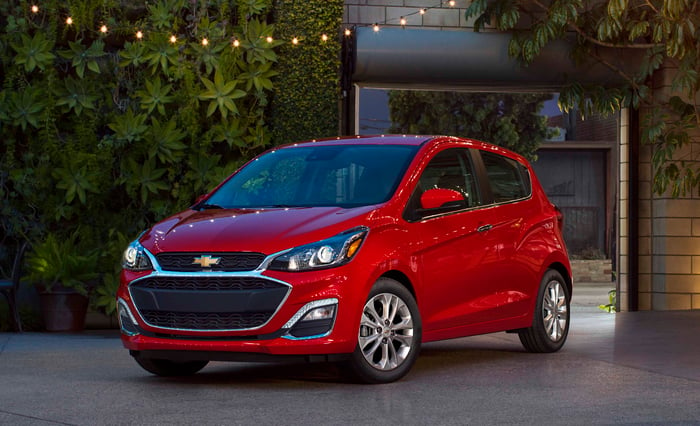 The tiny Chevrolet Spark will stick around

The Spark is a minicar, one size down from subcompacts like the Sonic and Ford's (F 7.76%) Fiesta. It's made in South Korea, and that's one key to why it's sticking around with a revamp for 2019.

While U.S. sales of the Spark (the blue line in the graph below) have fallen over the last couple of years, they haven't fallen by a lot. Meanwhile, minicars remain popular in some other markets around the world. There's no reason for GM to discontinue building the car in its Korean factory, and no reason to stop sending some to the United States for buyers who want a small, fuel-efficient Chevy. Data source: General Motors. The chart shows annual U.S. sales of the Chevrolet Sonic (in green) and Chevrolet Spark (in blue) from 2013 through 2017.

GM is killing the Sonic for two good reasons

The chart above tells much of the Sonic's story -- but not all of it. As you can see, U.S. sales of the subcompact Chevy have fallen from a high of 93,518 in 2014 to just 30,290 last year. The car that was once hailed as a success story for U.S. manufacturing -- a American-built small car that was both profitable and well-regarded -- has now faded, as more buyers choose crossover SUVs instead. 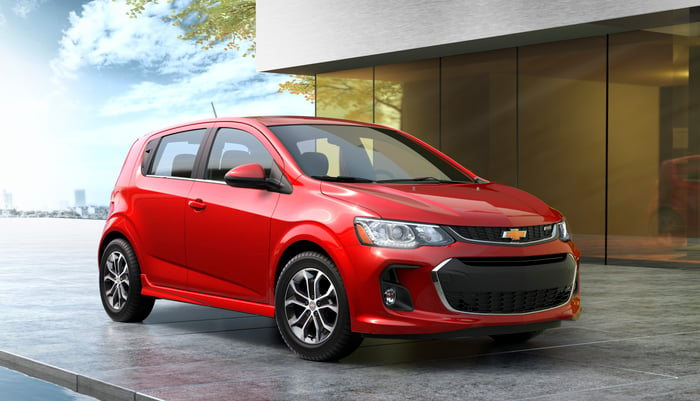 Will the 2018 Chevrolet Sonic be the last? It looks likely. GM will use its assembly line to build more electric and self-driving cars. Image source: General Motors.

There's more to the story, though. The Sonic is built at GM's Orion Assembly Plant in Michigan, on an assembly line shared with the all-electric Chevrolet Bolt EV. The Bolt isn't just GM's first long-range electric vehicle, it's also GM's chosen platform for its upcoming self-driving system. GM has plans to launch two more electric vehicles using the Bolt's architecture -- and it also has plans to build a big fleet of self-driving taxis for deployment starting next year.

Long story short: GM's decision to end production of the now-slow-selling (and probably not-very-profitable) Sonic gives it the ability to use its Orion factory as a proving ground for mass production of battery-electric vehicles, including autonomous models. 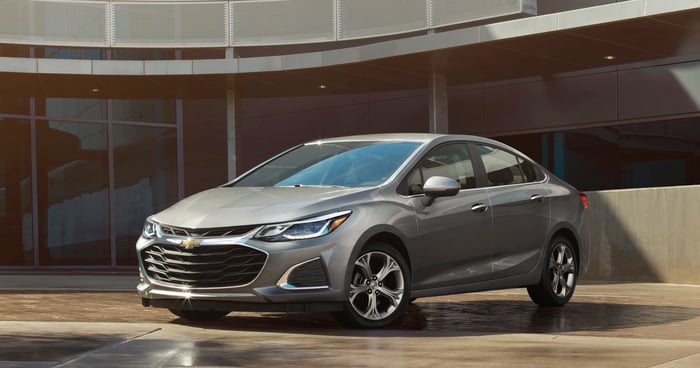 The Chevrolet Cruze gets a new face and a new touchscreen system for 2019. Image source: General Motors.

The Cruze gets a revamp -- and a production cut

As with most other compact sedans sold in the United States, sales of the Chevrolet Cruze have fallen over the last few years as sales of crossover SUVs have soared. GM sold 184,751 Cruzes in the U.S. last year, down 32% from the model's 2014 sales peak. Simply put, the Cruze still sells in very big numbers, big enough to earn the Cruze an update for 2019. But those sales numbers aren't nearly as big as they were a few years ago, so GM is cutting a shift at the Ohio factory that makes the compact Chevy. About 1,500 workers are expected to receive buyout offers.

The current Chevy Malibu was hailed as a groundbreaking car when it was launched in 2016. A clean-sheet redesign, the Malibu managed to be lighter, more fuel-efficient, roomier, and sturdier-feeling than its predecessor all at once, thanks to GM's innovative "mixed-materials" construction approach. An upgraded interior and a well-regarded hybrid version were icing on the cake: The new Malibu was a winner. With sales still strong, GM is giving its sedan an update for 2019.

For 2019, the Chevrolet Malibu will get a revamped nose, a new continuously variable transmission, and a new sporty RS model. Image source: General Motors.

It's not clear whether Ford will keep the Fusion around, but it should be pretty clear why GM has no intention of ending the Malibu's run anytime soon. 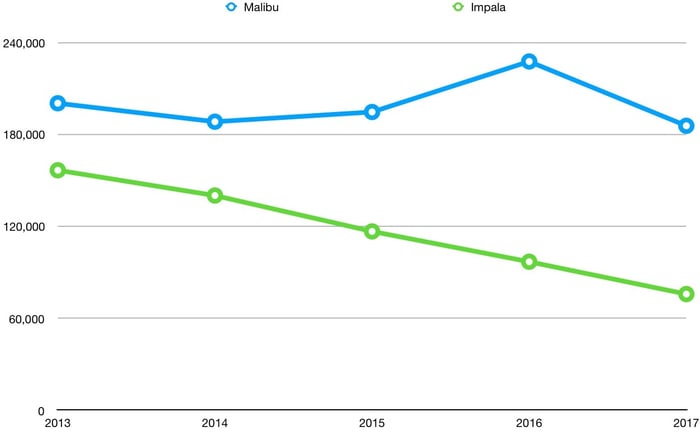 What will GM do with the big Impala?

The full-size Chevrolet Impala sedan isn't getting an update for 2019. That's something of a disappointment: Like the 2016 Malibu, the Impala is another GM car that was seen as a huge improvement over the model it replaced when it debuted for 2014. It's a big, comfortable, quiet car that feels well-built and gets great fuel economy -- a combination that surprised and delighted reviewers when it was first launched. Initial sales were very strong. 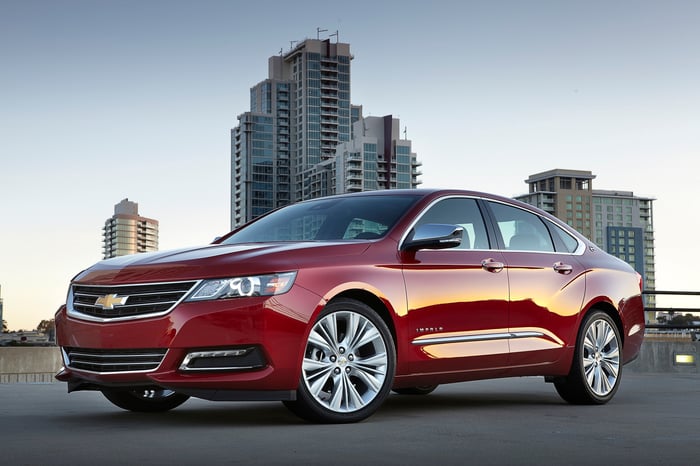 But now? Not so much. The green line in the chart above tells the tale: U.S. sales of the Impala have dropped a whopping 52% from 2013 to 2017. The Impala still fills an important niche, and it's a product of which GM is rightfully proud. It's believed that GM has (or had) an all-new Impala under development, using a revised architecture shared with the new-for-2017 Buick LaCrosse.

If it stays on schedule, that all-new Impala will probably appear as a 2020 model. But with sales down this much, it's not clear when it will appear -- if ever.