The aerospace and defense company has been held back in recent years by its massive business jet operations. Evidence is mounting that that is likely to change this year.

Barely a week after closing its $9.7 billion purchase of CSRA, General Dynamics (GD -2.73%) fired up the deal machine once again with a $250 million purchase of Hawker Pacific. This latest purchase, though not nearly as big as the CSRA deal, is fresh evidence that General Dynamics' management believes a global business jet recovery is finally at hand. If so, that would be a welcome development for GD investors. 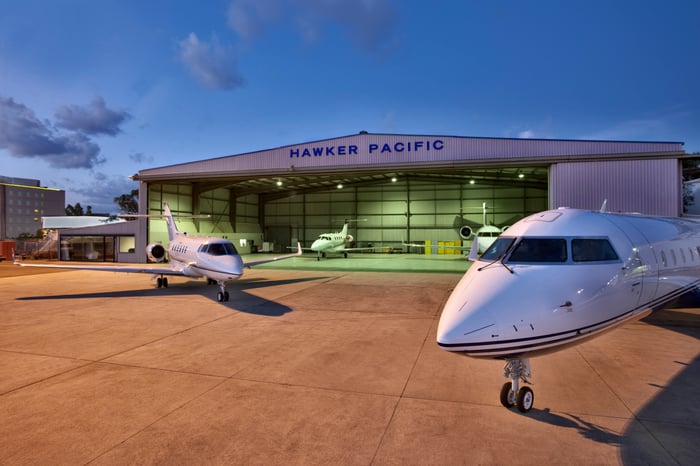 Hawker Pacific is an Australia-based provider of aircraft and helicopter management services and supplies; it operates out of the Asia-Pacific and Middle Eastern regions. Since 2014, the company has been controlled by China's HNA Group, which is in the process of selling assets to pay down its substantial debt load.

In fiscal 2017, Hawker booked revenue of 185 million Australian dollars (about $143 million U.S. at current conversion rates), according to HNA documents.

Aircraft sales and support is a market General Dynamics knows well. The company owns Gulfstream, one of the largest builders of business jets, as well as Jet Aviation, a Swiss services company, which will absorb Hawker Pacific. The purchase would give Jet Aviation 20 service locations spread across seven Asian countries, and allow Gulfstream to offer additional services to its customers in those markets.

"The acquisition of Hawker Pacific represents a significant step in expanding our footprint, capability, and customer offer across Asia Pacific and the Middle East," Rob Smith, president of Jet Aviation, said in a statement. "Hawker Pacific has a wide range of services ... enabling Jet Aviation to further expand its current portfolio, enter new markets, and reinforce the company's position as one of the world's leading business aviation service providers."

Gulfstream has been just about the only dent in the armor at General Dynamics over the past year, with business jets never fully recovering from the 2008-2009 recession. The industry shipped 661 business jets worldwide in 2016, according to the General Aviation Manufacturers Association, down from 1,313 units in 2008. Gulfstream sold 115 jets in 2016, down from 156 in 2008, according to the same data.

Despite Gulfstream's decline, General Dynamics managed to post a full-year 17.83% stock gain in 2017 and hit multiyear highs in terms of price-to-earnings ratio and other metrics. Yet the company's stock growth and valuation trail those of most of its defense peers, weighed down by concerns about business aviation.

There have been some hopeful signs of a recovery in recent months. Overall business jet deliveries turned slightly positive year over year in 2017, though still well off 2008 totals. Gulfstream reported net orders up 20% year over year, with orders for the G650 growing by 78%. And changes in U.S. tax law in 2018 should help spur new domestic business jet sales, in part by speeding depreciation.

Why GD is a buy

General Dynamics acquiring Hawker Pacific is a sign that management believes that the business jet market is at long last poised for growth. Should Gulfstream's production rates recover to anything approaching pre-recession levels, investors will have reason to cheer. 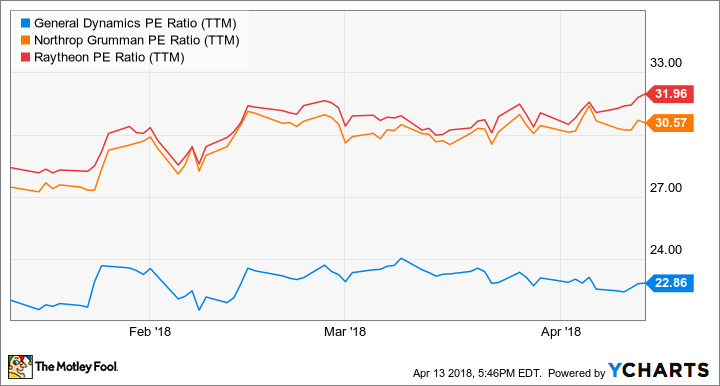 As I mentioned, General Dynamics shares have lagged those of rivals, including Northrop Grumman and Raytheon, despite a massive uptick in defense spending, because Gulfstream has been in the penalty box. General Dynamics today trades at a 25% discount to those companies on a price-to-earnings basis.

If Gulfstream recovers, expect that gap to close, providing the fuel needed for a further rally in General Dynamics' shares. Management seems to be bullish on business jets. That makes it a great time to buy GD.