Please ensure Javascript is enabled for purposes of website accessibility
Log In Help Join The Motley Fool
Free Article Join Over 1 Million Premium Members And Get More In-Depth Stock Guidance and Research
By Dan Caplinger – Apr 21, 2018 at 7:17AM

Don't want to deal with the hassle of cryptocurrency ownership? Here's how you can profit anyway.

Early investors in bitcoin have made fortunes, and that's prompted many would-be cryptocurrency investors to take a closer look at the wave of interest surrounding bitcoin and other crypto tokens. Yet many people still aren't comfortable with the idea of actually purchasing bitcoin, with the need to rely on exchanges that don't offer the same regulatory protections that exchanges in stocks and other securities get from the U.S. Securities and Exchange Commission.

If you believe that the prospects for bitcoin and other crypto assets are good, then you can find ways to invest that don't require you to take physical possession of cryptocurrencies. In particular, the following three investments might offer attractive alternatives to holding bitcoin directly, and for some, the returns could actually be better going forward than those that bitcoin itself ends up producing. 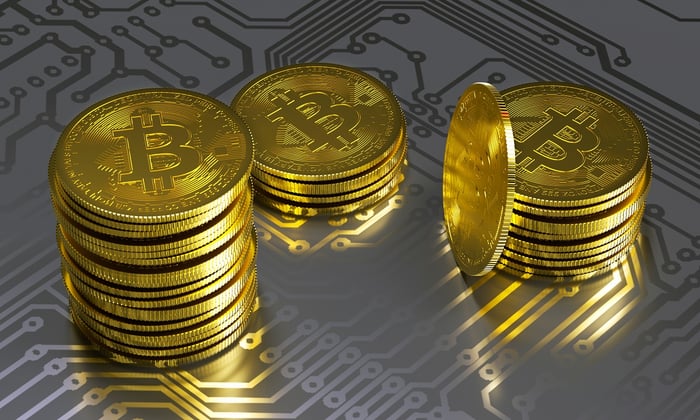 Last December, two major futures exchanges started offering futures contracts on bitcoin. CBOE Global Markets (CBOE -0.31%) was the first to market with its futures offering, and CME Group (CME -0.86%) didn't waste any time coming out with its own version of a bitcoin contract.

The two sets of contracts have slight differences, but they both allow investors to get exposure to changes in prices of bitcoin. Those who buy futures contracts can profit if the price of the cryptocurrency goes up between the time they buy and the expiration date of the futures contract, while those who sell futures contracts profit from downward moves in bitcoin's price.

The advantage of bitcoin futures is that you never have to own bitcoin in order to make money from its price moves. Unlike some commodity contracts that settle in the underlying commodity when the futures contract expires, bitcoin futures are cash-settled, meaning that the parties merely exchange U.S. dollars to settle up at expiration rather than actually delivering bitcoin.

Another way to make money on the bitcoin craze is to invest in the companies that make it possible for the operations that mine cryptocurrencies to do so efficiently and effectively. Graphics processing chips have become extremely valuable as tools for solving the complex mathematical problems that miners have to answer in order to unlock new bitcoin.

NVIDIA (NVDA -0.66%) and Advanced Micro Devices (AMD -1.22%) have seen huge spikes in demand for their respective GPU offerings, and in fact, some consumers who want to use GPUs for purposes like video gaming have suffered due to higher prices for the chips. The boost to sales has been so large that some investors in NVIDIA and AMD have been nervous about relying too much on cryptocurrency miners, especially because massive fluctuations in bitcoin prices can cause big changes in how much new mining activity takes place. For their part, both AMD and NVIDIA will have to work to make sure their core video-gaming customers can get the products they need while still deciding how to take maximum advantage of what could be a short-term profit opportunity on the crypto side.

Finally, if you like the features that blockchain technology offers but aren't certain about the cryptocurrencies tied to that technology, then looking at the companies that stand to benefit from the adoption of a particular blockchain application can be a good place to start. For instance, Ripple is a cryptocurrency that's connected with a network allowing financial institutions to transfer money across the globe quickly with a minimum of delay. Participants can use tokens to speed up transactions further, but they can also simply use the network without tokens.

Several institutions have invested in Ripple Labs, the company behind Ripple. Among them were CME Group and Banco Santander (SAN 0.43%) in the financial world, along with memory storage giant Seagate Technology (STX). Each of these players stands to gain if Ripple Labs does well in promoting the use of Ripple, and so their shares could benefit indirectly from Ripple's success.

Be smart about crypto investing

If you're nervous about paying cold, hard cash for a digital token that could get hacked out of existence, you're not alone. These three alternatives have risks of their own, but those risks are ones that many investors are more familiar with and more comfortable taking. If cryptocurrency keeps making advances, then each of these investments could see further gains in the future.