Please ensure Javascript is enabled for purposes of website accessibility
Log In Help Join The Motley Fool
Free Article Join Over 1 Million Premium Members And Get More In-Depth Stock Guidance and Research
By Lou Whiteman – Apr 23, 2018 at 7:21AM

The company jumped after a big earnings beat, and there's reason to believe the momentum is sustainable through 2019.

Shares of Textron (TXT 5.14%) surged nearly 7% on April 18 after the company announced first-quarter results that blew past analyst estimates. The results were no one-quarter fluke. Rather, Textron gave investors ample reason to believe this is only the beginning of a strong run that should carry the stock higher over the next 18 months.

Textron's adjusted quarterly earnings per share of $0.72 nearly doubled year over year, and beat consensus by $0.24. The beat was driven in part by a lower tax rate, but was also due to stronger-than-expected results. The company's aviation segment grew revenue by 4% and generated a margin of 7.1%, up from 3.7% a year prior. Bell Helicopter, meanwhile, grew by 8% on strong military sales.

Here are three factors that can fuel further upside in Textron over the quarters to come. 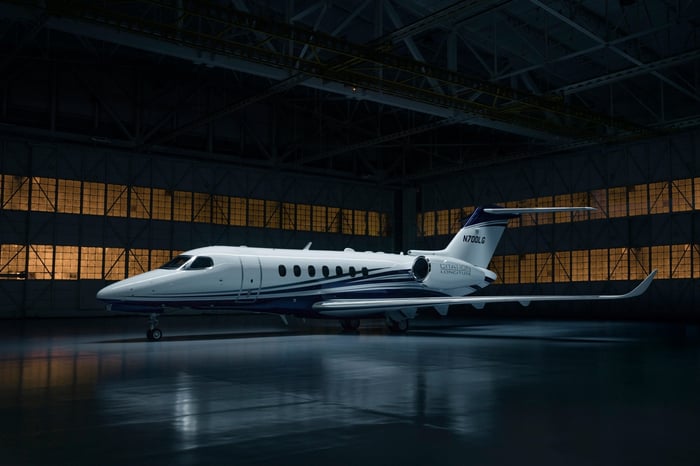 Small planes are back

Textron is one of the nation's largest manufacturers of business jets and small planes, operating under the Cessna, Beechcraft, and Hawker brands. That's a business that has been slow to recover from the 2008-2009 recession. Industrywide, only 2,324 piston aircraft, turboprops, and business jets were shipped in 2017, compared to 4,276 in 2007, according to the General Aviation Manufacturers Association.

Fortunately 2017 was a slight improvement over 2016, and in the first quarter of 2018, demand for Textron planes came roaring back. Textron's aviation backlog was up $400 million on a sequential basis, with strength coming from both the jet and turboprop business lines. Book-to-bill moved above 1.0 for the first quarter for the first time in years.

Textron CEO Scott Donnelly, on a call with analysts, attributed growing demand for planes in part to tax reform, which provides a depreciation boost to owners, and in part to business confidence becoming strong. "People are looking to invest," Donnelly said. During the downturn upgrades were delayed, so now a fleet of aging planes is creating additional demand for new jets.

There's reason to be optimistic that the surge is sustainable. The company's new Cessna Citation Longitude business jet should be introduced this year; the next-generation single-prop Cessna Denali and twin-prop Cessna SkyCourier products are scheduled to be introduced in 2020. Textron is refreshing its product lineup just as demand for its products is increasing, and it should be well-positioned to grow revenue and defend margins at least into 2020.

Textron is an odd amalgamation of businesses, making everything from military helicopters to Cessnas to golf carts to snowmobiles. But the company historically has been reluctant to divest, arguing in part that shedding units would dilute earnings.

That stance changed with this earnings report, as Textron announced plans to sell its tools and test-equipment businesses to Emerson Electric (EMR 3.59%) for $810 million in cash. After taxes Textron expects to net about $725 million from that disposition, and use the funds for additional share repurchases to offset the earnings impact of the sale.

CEO Donnelly dismissed an analyst categorization that the business to be sold was "low-return," but did leave the door open to other divestitures: "If somebody comes along and says, 'look, we value that business and think it's a better fit in our portfolio,' and put something on the table that we think is good for our shareholders ... we're open to entertaining a transaction," he said.

A Textron sell-down of industrial assets has been rumored since the financial crisis, and at least some portfolio pruning seems long overdue. Any further sales -- perhaps the company's auto-parts business, for example -- would likely be viewed favorably by the markets.

Will the Scorpion sting?

Earlier in the decade, Textron took the unusual step of beginning work on a warplane on spec, instead of going through the typical process of developing new weapons systems under the guidance of -- and with funding provided by -- the Pentagon. The result is the Scorpion, designed as a low-cost alternative built with off-the-shelf engines and other components already used on Textron's business jets, and a price tag starting at just $20 million.

The sales pitch for the Scorpion is that although it can't outmaneuver or outgun more costly aircraft like the F-35 or F-16, not all missions require those capabilities, and many operators can't afford the high price tags that come with that air superiority.

Textron has reportedly held talks with a number of countries including Saudi Arabia, Colombia, and India, and has submitted the Scorpion in a U.S. Air Force light attack aircraft competition. But so far it hasn't won any orders.

At this point the Scorpion has few true believers, yet Donnelly says Textron continues to talk with buyers, and just had one unnamed potential customer in for a visit in the last few weeks. A Scorpion order isn't priced into most of the models constructed by increasingly skeptical Wall Street analysts; it would provide considerable upside should a buyer be found.

It's not too late to get on board

Textron, similar to General Dynamics, has been held back in recent years by the extended slump in business-jet sales. With evidence growing that the trend is finally reversing and sales are set to pick up, Textron's most recent quarterly results are sustainable. Increases in aviation and military sales will also make it easier to divest other lower-margin businesses, allowing the company to focus more resources on its biggest winners.

Given the varying number of businesses Textron is in it is hard to find pure comparisons, but the company even after the run-up trades at just 1.2 times sales, compared to business jet and military rival General Dynamics' 2.2 times multiple and fellow aerospace and industrial components supplier Honeywell's 2.8 times multiple. Textron's forward price-to-earnings ratio is in line with those two other companies, but I expect Textron to raise its full-year guidance in the months to come which would bring down its multiple.

If you missed out on Textron's post-earnings jump, it isn't too late to buy. Textron is still ascending toward a higher cruise altitude.