Amazon is teaming up with GM and Volvo to offer something new: in-car package delivery.

Amazon.com (AMZN 1.20%) can now deliver packages right to your car -- if you own the right kind of car, that is.

Amazon said Tuesday that it has joined up with General Motors (GM -1.24%) and Volvo Cars to begin offering in-car deliveries to owners of vehicles with certain connectivity options as part of its Amazon Key program.

At first glance, this may sound like a solution in search of a problem. But there are folks for whom an option like this might make a lot of sense -- and there are good reasons it makes sense for Amazon and for the automakers that have chosen to participate. 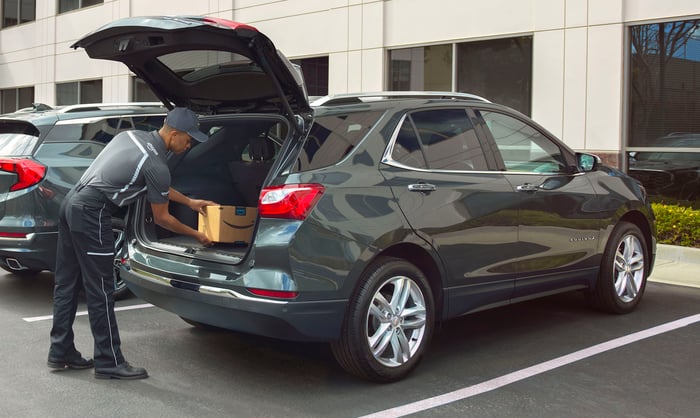 Amazon Prime subscribers in 37 U.S. cities who own a 2015 or newer GM or Volvo vehicle can now elect to have packages delivered to their cars. Image source: General Motors.

The keys to the new Amazon Key In-Car offering are the Volvo On Call and GM OnStar subscription connectivity services, both of which allow the automaker to unlock a subscriber's vehicle when needed.

Amazon Prime members who subscribe to Volvo On Call or OnStar can download the Amazon Key cellphone app and link their Amazon account to their Volvo or GM account. From there, it's simple: The user tells the app where the car is located, shops on Amazon, and selects the "in-car" delivery option at checkout.

Amazon has built in several layers of security that ensure that its authorized delivery person has the right car, and can unlock it just one time. The car is relocked after the package is delivered.

The system works with 2015 model year or newer Volvo, Chevrolet, GMC, Buick, or Cadillac vehicles with active Volvo On Call or OnStar accounts. It's available in 37 U.S. metropolitan areas. Amazon said that it expects to add more makes and models over time.

A hopefully less controversial version of the Amazon Key service

Last fall, the online giant rolled out a new service called Amazon Key. Subscribers who installed a special camera and lock on their homes could give other people an access code allowing entry. For people in 37 U.S. metropolitan areas, there was another feature: Amazon Prime members could elect to give an Amazon delivery driver one-time access to their homes in order to put packages inside.

For some people in some situations, such a service made sense. If you live (for instance) in a neighborhood where packages tend to disappear from porches, the idea of letting an Amazon driver leave the packages inside your house might sound pretty good. Of course, to many others, it sounded like a step too far: Do we really want to give Amazon the keys to our houses, even under what Amazon promises are carefully limited circumstances?

The outcry made it clear that if a service like Amazon Key is ever to be adopted on a wide scale, it'll require a broad shift in customers' thinking. Amazon subsequently made the Key service available nationwide, but -- for now, at least -- in-house package delivery is still limited to those 37 cities. 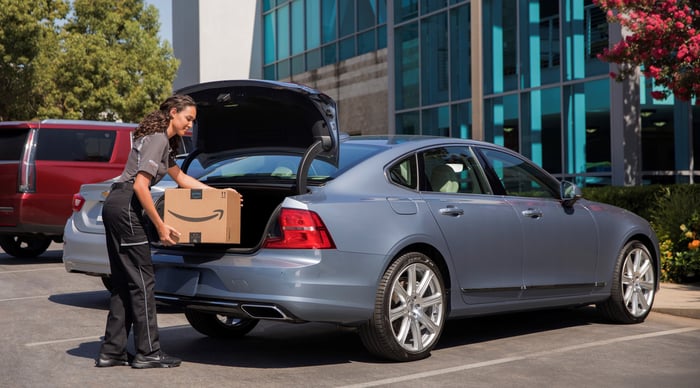 Amazon hopes to add other makes and models of vehicles to the program over time. Image source: Volvo Cars.

What do GM and Volvo get out of this?

They get new subscribers! Volvo On Call and OnStar are subscription services, both starting around $200 a year. They're profit centers for both automakers. The companies would like to get as many people subscribing as possible. The incentive for customers to participate is simple: Folks who find Amazon Key In-Car to be a compelling idea are likely to give the subscription services a try.

The upshot: Why Amazon wants to deliver packages to your car

For people in those cities who might have balked at in-house delivery, the new In-Car service is an intermediate step. It's easy to see what Amazon is thinking: People who aren't comfortable giving the online giant access to their front doors, or who haven't had interest in the Amazon Key front-door-lock product, might be willing to give Amazon access to their vehicle.

If that works out well for them over time, they might be willing to pay up for Amazon's door lock to try the in-house service, too.