The company's efforts to ratchet up same-store sales and accelerate growth in China are the two biggest things to watch -- but don't discount the importance of its aggressive approach to fight racial bias in its stores.

Starbucks Corporation (SBUX 3.36%) is set to report its second-quarter fiscal 2018 earnings after market close on April 26. And while the media has -- rightfully -- focused on the early-April incident in a Philadelphia store where an employee called the police and had two African-American men who were waiting for a business associate arrested, it's likely that management is looking forward to moving the headlines away from that event and talking about the performance of the business itself.

There will surely be questions on the earnings call about the Philadelphia event, particularly as the company plans to close all of its company-owned U.S. stores on May 29 to conduct racial-bias education for all employees. But there are other things investors need to pay close attention to as well when Starbucks reports, including how its efforts to accelerate same-store sales -- also called comps -- in the U.S. are working, and how its new push in China, after the company assumed complete operation of all Starbucks stores in that country, is going. 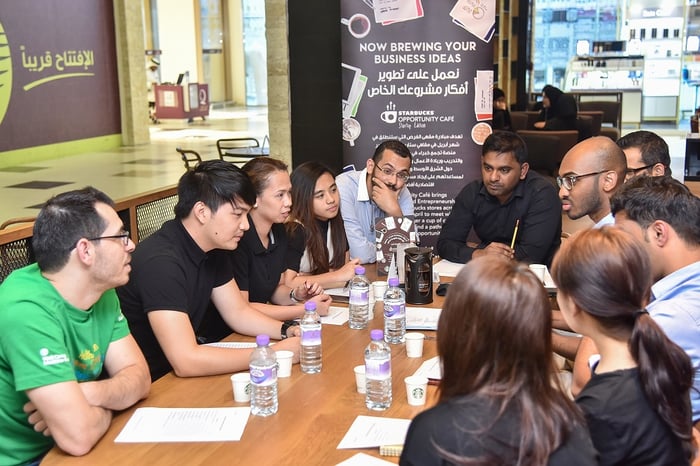 Starbucks' reputation as a welcoming "third place" is important to its long-term health. Image source: Starbucks.

Let's take a closer look at these topics, and the details that matter the most to investors.

The importance of addressing racial bias

In recent quarters, Starbucks' comps growth has slowed. Last quarter's 2% comps growth in the U.S. and on a consolidated basis was its lowest in almost a decade. On the earnings call, management said that there were several factors behind the weak result, including some impact from weaker traffic in stores that rely on retail shoppers for much of their business, and weak sales of holiday-related merchandise. The question on many investors' minds: Can Starbucks reverse the traffic trend?

For years, Executive Chairman Howard Schultz has talked about Starbucks as a "third place" -- a social space other than home and work. I can attest to having spent many hours in different Starbucks stores over the years meeting friends and business associates, and having not bought anything on multiple occasions and never felt any pressure to spend money or leave.

But clearly this isn't always the case for every person and every Starbucks store, and the company simply cannot allow that to be the case. Beyond the obvious "right thing to do" aspect, from a business perspective any damage to its reputation as a welcoming third place would further harm traffic and sales. Taking aggressive steps to fight racial bias in its stores matters. On the line is Starbucks' public image, as well as its ability to grow sales in its existing store base.

How Starbucks is working to grow comps

In recent years, Starbucks has steadily taken steps to increase sales during both its busiest morning hours and later parts of the day. For its high-traffic morning hours, the company has implemented its Mobile Order and Pay feature via the Starbucks app. Last quarter, 11% of orders in company-owned U.S. stores were placed via the Starbucks app, and management said this is helping its busiest stores serve more customers more quickly during peak hours.

But Starbucks Rewards customers, previously the only customers who could use Mobile Order and Pay feature, account for only 37% of sales in U.S. company stores, so in an effort to further improve customer service and throughput, it started rolling out Mobile Order and Pay to anyone using the app in March, meaning this will be the first earnings report with any data on how this initiative is helping drive sales.

The company also continues to prioritize food, as add-on to morning orders, but also to attract customers to its stores during lunchtime and in the evening. Last quarter, food produced 21% of total sales, and management is trying to speed up its growth on both year-over-year and sequential bases. The company has had multiple food-related stumbles in recent years, including the closure of its La Boulange bakery business only a few years after acquiring it, but even with these failures, food sales have steadily grown.

Starbucks is also investing in offering more coffee and non-coffee beverages across a greater number of its stores. This includes the expansion of Teavana teas in-store, adding nitro coffees to more of its stores, and growing its higher-end coffee business. The last initiative is being led by Schultz, and involves opening Starbucks Reserve bars in existing Starbucks stores and opening new stand-alone flagship Reserve Roastery stores.

Starbucks is trying a lot of things to grow sales in its existing stores; some initiatives will work better than others. Pay close attention to how well its various projects are working and how management is adjusting to its successes and failures.

Can Starbucks keep performing in China?

Last summer, Starbucks announced it was acquiring full ownership of its mainland China stores and taking over full operational control. At last count, the company operated around 3,100 locations in the country, making it the company's largest market outside the U.S. But it's still a fraction of the size of the U.S. market, having only recently passed California (with about 2,800 total locations) in 2017.

China's economy is steadily shifting away from manufacturing and into service-based industries. With a rapidly growing middle class that will approach 500 million in a few years, it should be easy to see why management says China will eventually become Starbucks' biggest single market.

The big question is whether Starbucks can continue to generate the incredibly strong financial and operating results in China which it saw under its former joint venture partner. Many growth theses heavily weighted on China have failed because of a lack of ability to operate effectively in that country. The results for Starbucks have been phenomenal so far, but investors should continue to monitor China closely.