Please ensure Javascript is enabled for purposes of website accessibility
Log In Help Join The Motley Fool
Free Article Join Over 1 Million Premium Members And Get More In-Depth Stock Guidance and Research
By Harsh Chauhan – Apr 25, 2018 at 10:47AM

Shock waves went through the tech world when Bloomberg reported recently that Apple was designing its own chips to power its MacBooks. Cupertino has a history of vertically integrating the manufacturing process of its devices by eliminating external suppliers, so such a move wouldn't be particularly surprising, but it could be bad news for Intel (INTC -2.76%) if Apple eventually stops buying its chips for its PCs.

Intel could miss out on the PC recovery

Intel's client computing group (CCG) is the only remnant of its legacy PC-centric business. The company has now diversified into lucrative areas such as data centers and the Internet of Things, but CCG still does most of the heavy lifting when it comes to financial performance. In 2017, the segment supplied 54% of Intel's total revenue and was up 3% from the prior year, thanks to the launch of new products and a stable PC market. 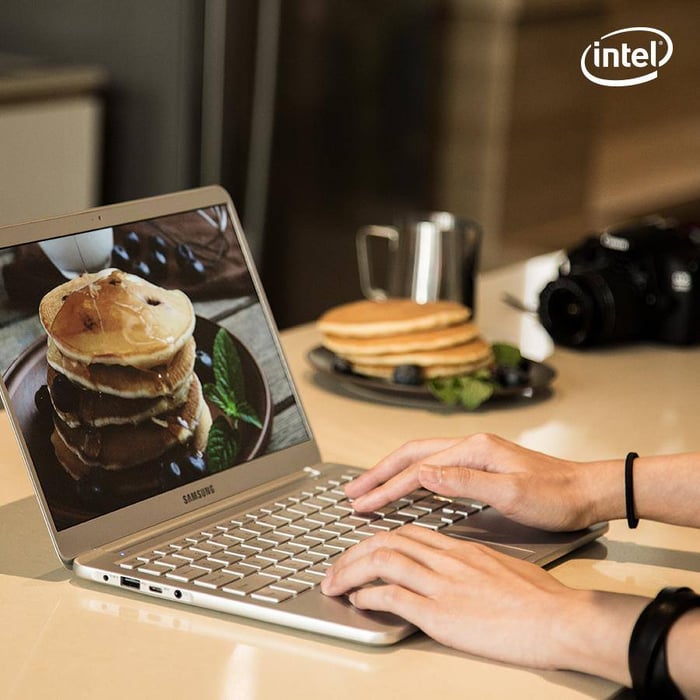 IDC data suggests that PC sales were flat year over year in 2017, but sales of Apple's Mac line rose almost 6%. In fact, Apple was the second-biggest gainer with a 5.9% year-over-year jump in shipments and was the fourth-largest supplier in terms of shipments, ranking about half of Dell at No. 3. What's more, Gartner forecasts that the PC market will recover over the next couple of years, with increased sales of lightweight PCs and ultraportable devices such as the MacBook Air.

An Apple decision to move its PC chips in-house could knock the wind out of Intel's PC business. Bloomberg reported that according to its supply chain analysis, Apple supplies about 5% of Intel's annual revenue.

But Apple isn't the only reason Intel's CCG business is under threat right now, as rival Advanced Micro Devices (AMD -6.17%) is aggressively looking to make inroads into the notebook PC market with its Ryzen CPUs.

AMD's recently launched Ryzen mobile processors are in strong demand among laptop OEMs (original equipment manufacturers), which could further weaken Intel's CCG business. For instance, Dell's latest Inspiron 17 5000 line of ultraportable devices come equipped with two variants of the Ryzen CPU, and HP is expected to come out with three models based on the Ryzen CPU and integrated Vega graphics cards.

Now, HP had revamped its existing notebook lineup with Intel's processors back in February. So its selection of AMD for other notebook models means that OEMs are willing to give the Ryzen a chance, which isn't surprising given that AMD's processors seem to be performing faster than Intel's solutions in real-world applications.

For example, a laptop based on the mid-range Ryzen 5 1600 CPU has been found to be 35% faster than its Intel counterparts, so it won't be surprising to see more notebook manufacturers turning to AMD's offerings in place of Intel's to power their devices. In fact, AMD CEO Lisa Su is hopeful that OEMs will launch 60 new Ryzen-powered notebooks in 2018.

While AMD wasn't a major player in the PC market before Ryzen came out, things have changed over the past few months; well-priced and powerful products have reportedly allowed the company to take market share from Chipzilla at a steady pace. Mercury Research estimates that AMD's CPU market share increased to 12% in the fourth quarter of 2017, as compared to 9.9% in the year-ago quarter.

The challenges faced by Intel in the legacy PC-centric business have forced the chipmaker to diversify into fashionable and lucrative markets such as data centers and the Internet of Things (IoT). The good part is that these moves have worked out well for Chipzilla so far. Its data-centric businesses (which include the data center group, the IoT group, and programmable solutions group) supplied almost $45 billion in revenue last year, growing 16% year over year and, to a large extent, mitigating the slowdown in the PC business.

The data center group, which is its second-largest source of revenue after client computing, saw 11% revenue growth last year to $19.1 billion, due to increasing demand for its server chips used for cloud computing applications. However, Intel will have to contend with AMD's rise in this space.

AMD's EPYC processors are expected to capture more market share in 2018 as they are selected by more cloud service providers to power their infrastructures. In fact, EPYC has made big waves since its launch less than a year ago, with Yahoo! Japan becoming the latest company to choose the line to power its servers. What's more, Microsoft and Baidu are already using EPYC chips.

So AMD has done well to cut its teeth in a market where Intel has a monopoly, and it's looking to gradually break Chipzilla's hold over this space by taking its market share into the mid-single digits this year.

This might not seem like much at first, as Intel will still hold the majority of the market, but the important thing to note is that AMD has done well in a short time and it plans to step on the gas by ramping up production as 2018 progresses.

Can Intel overcome these challenges?

Intel's key businesses are faced with some tough challenges, but it's too early to predict the company's demise, as it has shown remarkable resilience. Its total revenue grew 9% last year, thanks to its strength in the data-centric businesses, which are growing at a fast pace.

But the potential loss of the Apple account, and AMD's rise to prominence in CPUs and servers, will put more pressure on the data-centric group to power the company's growth in the long run. This is why investors need to keep a close watch on these developments.