GM took a $900 million charge for an extensive revamp of its Korea operation.

General Motors (GM -4.61%) said that its first-quarter net income fell 59%, to $1.1 billion, on a planned drop in pickup-truck production and a big one-time charge for restructuring in Korea.

There were two big factors behind GM's $1.6 billion year-over-year decline in net income. Neither were surprises, and neither will have a negative effect on GM's longer-term prospects.

First, GM took a $900 million one-time charge related to a major restructuring of its Korean operation, including the closure of a factory. The charge included $400 million in termination benefits for employees of that factory, as well as $500 million in non-cash asset impairments. (Accounting charges, in other words.) The good news is that the Korean restructuring will lead to about $500 million per year in cost savings, CFO Chuck Stevens said during GM's earnings call.

GM said the remainder of the decline was more than accounted for by a drop in wholesale volumes, much of that due to planned downtime at GM's pickup-truck factories. GM is gearing up to begin production of all-new versions of its full-size Chevrolet Silverado and GMC Sierra pickups in the fourth quarter. GM needs to make substantial changes to its factories to build the new trucks, and for some of those changes, the factories need to be temporarily idled. 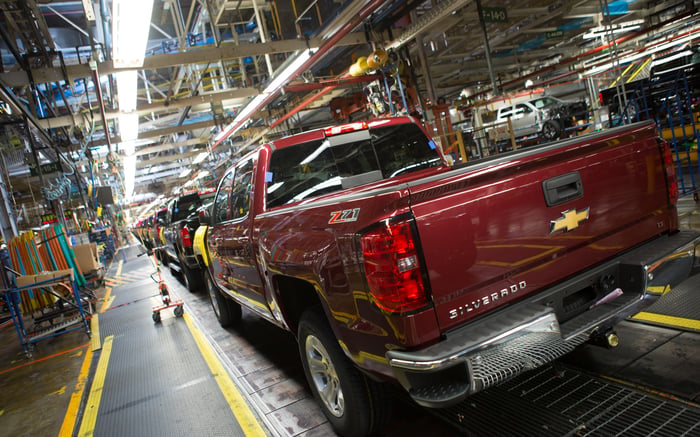 The assembly line at GM's factory in Silao, Mexico. Silao is one of three GM plants in North America that build the Chevrolet Silverado and GMC Sierra pickups. Image source: General Motors.

GM didn't say which of its truck factories were idled in the first quarter, but according to figures from Automotive News, production at GM's factory in Silao, Mexico, one of three North American GM factories that build both the Silverado and Sierra, fell by about 30,000 units in the first quarter versus the first quarter of 2017. Assuming an average wholesale price of $40,000 per truck, that's $1.2 billion worth of lost production. Add in reductions in sedan production due to softer demand, and the total revenue decline due to reduced production volumes was about $1.8 billion, GM said.

Offsetting those losses to some extent were strong sales of GM's new line of crossover SUVs, which are more profitable than the models they replaced. And take note: GM's EBIT-adjusted margin of 7.2% handily beat both the 4.4% reported by Ford Motor Company (F -0.57%) for the first quarter and Fiat Chrysler Automobiles'(FCAU) 6% result.

GM has changed the way it reports results at the business-unit level. Its former regional units, other than North America, are now consolidated under a single unit called "GM International," or GMI. GMI includes results for South America, Asia, and GM's vast operation in China.

All financial results in this section are presented on an EBIT-adjusted basis. That's how GM reports them.

North America: GM earned $2.2 billion in its home market, down $1.2 billion from a year ago on lower production volumes, as discussed above. The unit's EBIT-adjusted margin was 8%, down from 11.8% in the first quarter of 2017. (Stevens said GM still expects to achieve a 10% margin in North America for the full year.)

GM's U.S. inventories were down by 163,000 units from a year ago and stood at a 72-day supply as of the end of the quarter. (That's good. When inventories rise above 80 days' supply, analysts start to worry that profit-crushing discounts will be needed to clear out the excess.)

Excluding China, GMI's results fell by about $82 million from a year ago, as improvements in South America were more than offset by weak sales in Korea.

GM Financial: GM's captive-financing arm earned $443 million in the first quarter, up from $228 million a year ago, on record net revenue of $3.4 billion. Despite rising industrywide concerns about auto loans, GM Financial's credit metrics remained stable: Net charge-offs were actually down slightly from a year ago, to 2.1%. 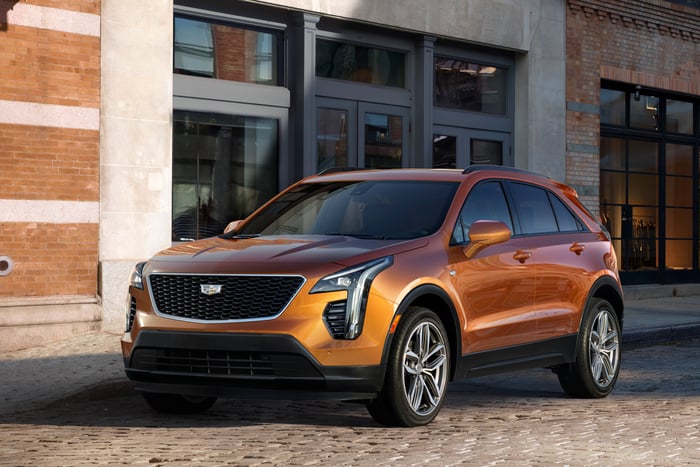 GM unveiled the all-new Cadillac XT4 crossover SUV in March. GM hopes the XT4 will continue the recent run of success it has enjoyed with its all-new crossover lineup. Image source: General Motors.

Cash, debt, and distributions to shareholders

As of March 31, GM had $17.2 billion in cash available to its automotive business and additional available credit facilities of $14.1 billion, for total liquidity of $31.3 billion. Against that, it had $15.3 billion of well-structured long-term debt, and $13.6 billion in underfunded pension liabilities.

GM returned about $600 million in cash to shareholders in the first quarter via dividends and an ongoing share-repurchase program.

Stevens said GM is on track to meet the full-year 2018 guidance it presented in January. It still expects that its full-year EBIT-adjusted and automotive free cash flow will be similar to the results it posted in 2017, with increased spending on new technologies and product launches offset by strong profits from its revamped line of crossover SUVs.