Investors are anticipating a strong quarter based on the launch of Overwatch League and digital content updates for "Call of Duty."

Activision Blizzard (ATVI 0.03%) will announce its first-quarter 2018 earnings on May 3, after the market close.

The first quarter is typically one of the slowest quarters of the year for video game companies. Activision didn't have any new releases to start the year, so it will be important to watch how new content updates to existing games performed, most notably for Call of Duty and Overwatch.

Here's what to watch with those titles, and more. 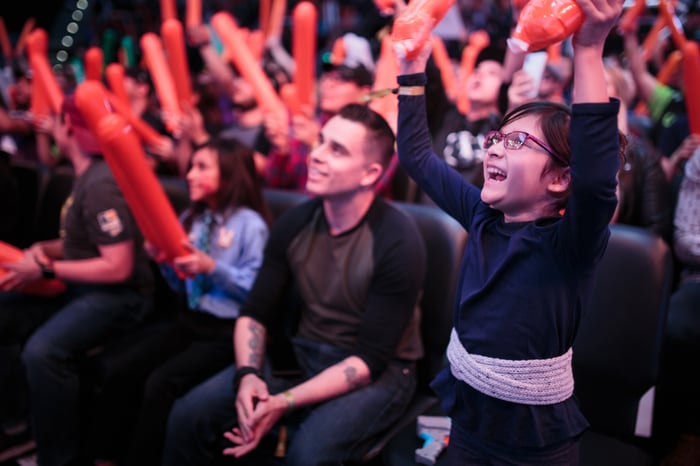 Engagement trends will be front and center

There were a few big events in the first quarter that likely stimulated player engagement levels. On the Blizzard side, the launch of Overwatch League in January has been driving higher interest for League-themed merchandise and in-game content. Since increasing engagement is one of the primary goals of esports, investors should listen to what management has to say about any increases in play-time for the game, as well as any impact esports has had on in-game spending and esports-branded consumer products including shirts, hats, and keychains.

Additionally, it should be a strong quarter for the Activision side of the company with new in-game content released during the quarter for Call of Duty: WWII, which launched in the fourth quarter and was the No.1 console game globally in 2017. After just six months on the market, unit sales of WWII are already well exceeding the life-to-date unit sales of Call of Duty: Infinite Warfare (released in November 2016).

Also, players have continued to remain engaged with Call of Duty: Black Ops 3 (2015). In fact, despite strong sales of WWII, players have remained most engaged with Black Ops, and management continues to support the 2015 version with add-on content updates.

With two Call of Duty games performing well right now, the Call of Duty player base is likely larger than it was a year ago after poor sales of Infinite Warfare. This could set up a particularly strong quarter for the Activision segment.

Management provides monthly active user (MAU) data for each of its segments, so investors should watch for healthy trends there. In the fourth quarter, Blizzard had its sixth consecutive quarter of 40-plus million MAUs, and Activision saw a 12% increase over the third quarter to 55 million, driven by the release of Call of Duty: WWII.

Activision has a history of issuing conservative guidance

For the first quarter, management is calling for net bookings -- a non-GAAP number that adjusts reported revenue for sales of digital products, as well as licensing and merchandise revenue -- to grow 7% over the year-ago quarter to $1.28 billion (excluding deferred revenue).

Non-GAAP operating margin is expected to be down from 43% in Q1 2017 to 36% in this year's quarter as the company invests in several growth initiatives. King is investing heavily right now in its in-game advertising efforts, which will launch later this year. And, of course, the company likely incurred some additional expense launching Overwatch League during the quarter, as well as game development for upcoming releases.

As for earnings, management's guidance calls for non-GAAP earnings per share to be flat year over year at $0.31 (excludes the impact of deferred revenue). But keep in mind, Activision has a history of underpromising and overdelivering. Over the last three years, the company has handily beaten its first-quarter guidance, and with strong trends developing for Call of Duty and Overwatch -- two of its biggest franchises -- I wouldn't be surprised to see another better-than-expected quarter this time around.

2018 is looking to be a record year for Activision Blizzard. The company is expanding its esports management team and has a major new World of Warcraft expansion releasing this summer called The Battle of Azeroth. As for King's mobile game initiatives, there's a new game in development in partnership with Playstudios called Social Casino. Investors will want to hear how those future releases are coming along.

The company recently announced that the new installment to the Call of Duty franchise will launch in October of this year. Call of Duty: Black Ops 4 will seek to build on the thriving player community of Black Ops 3. Investors should listen for any early indicators for pre-order trends during the conference call.

The year will be more financially weighted to the third and fourth quarter as King ramps up its in-game advertising with its mobile games and the new Call of Duty launches in October. Also, there will likely be more team sale announcements for Overwatch League as the year moves along. That said, I expect the first quarter to set the tone for the year, based not only on how the company performed, but what management has to say about current trends and how that might impact financial performance for the rest of the year.