One regional amusement park operator had a blowout quarter, with the other major chain set to report fresh financials on Wednesday morning.

It was a good week for amusement park operators. Shares of Six Flags (SIX -2.77%) soared 8.5% the day after it posted strong quarterly results. Cedar Fair (FUN -2.48%) began taking on the first riders for Cedar Point's Steel Vengeance -- easily this year's most anticipated new roller coaster -- ahead of the official grand opening next weekend.

Cedar Fair will also be reporting its first-quarter results in a few days. The first three months are typically a sleepy time for Six Flags and Cedar Fair, as most regional amusement parks open seasonally. However, by late April, these companies could have a good read on how the year will play out based on advance ticket and annual pass sales. With a few tailwinds working in the industry's favor, this summer is shaping up to be a coaster ride with more ups than downs. 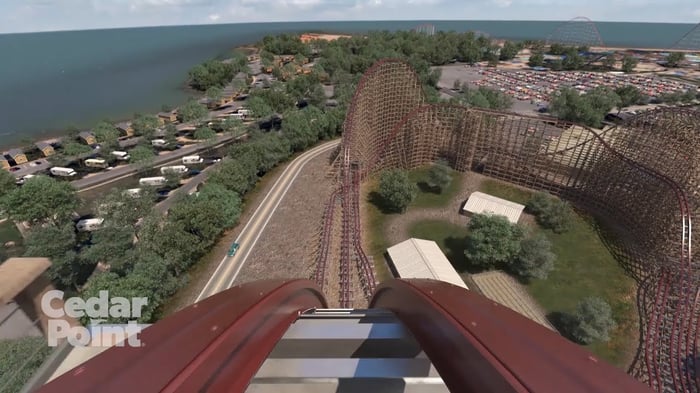 Strap in for the ride

Six Flags came through with a monster quarter, but the success is a bit deceptive once you take a closer look. Revenue did soar 30% to $129 million, but the first quarter is always lumpy based on how the timing of the Easter holiday pushes some of its vacationing students into busier March visits than usual. Revenue rose 36% in the first quarter of 2016 only to plunge 14% in 2017 when Easter was in April.

Six Flags also added a water park in Mexico and shifted its flagship Magic Mountain park in California to full-day operations this year. Attendance rising 27% to 2.4 million guests may sound like a lot, but it's a sliver of the 30.4 million guests that went through its turnstiles for all of 2017.

The chain did post a loss of $0.74 a share for the quarter, less than the red ink that analysts were expecting. Don't let the deficit be a deal breaker. Six Flags historically loses money in the first quarter, more than making that up in the balance of the year, when it entertains more than 92% of its annual guests.

A well-received report out of Six Flags could weigh on expectations when Cedar Fair reports on Wednesday morning. Wall Street is bracing for a widening quarterly loss -- again, not a problem for this industry -- with revenue rising 12% to $54 million. Smart investors will look beyond the quarter for a glimpse as to how Cedar Fair sees the rest of the year playing out.

Cedar Point is Cedar Fair's signature park, and it's not even open yet. Cedar Point's 2018 season begins next weekend, and the buzz is strong for the public debut of Steel Vengeance, the record-setting steel-on-wood hybrid coaster that is taking the place of the notoriously rough Mean Streak. Media members and other VIPs took the first rides on the new scream machine a few days ago to rave reviews.

The climate is kind for the industry. Cedar Fair and Six Flags grew their attendance levels slightly last year, and they should build on that in 2018. The economy is holding up with more take-home pay that should spur locals to visit their regional attractions. Unlike the major theme parks that are holding off on major attractions until next year, Six Flags and Cedar Fair are making big bets on new thrill rides opening in 2018. Last week was a good one of the industry, and the rest of the year should be even better.