Please ensure Javascript is enabled for purposes of website accessibility
Log In Help Join The Motley Fool
Free Article Join Over 1 Million Premium Members And Get More In-Depth Stock Guidance and Research
By Lou Whiteman – Apr 30, 2018 at 8:04AM

What appeared to be a lost opportunity could be resurrected if lawmakers get their way.

The original JSTARS airborne command and surveillance aircraft program was first deployed in the early 1980s, to use airpower to detect and track multiple enemy targets and help coordinate attacks on them. The Air Force in December 2016 launched a request for proposal to develop and manufacture a fleet of replacement aircraft with an estimated price of at least $6.9 billion, but in February reversed course and said it was moving in another direction. 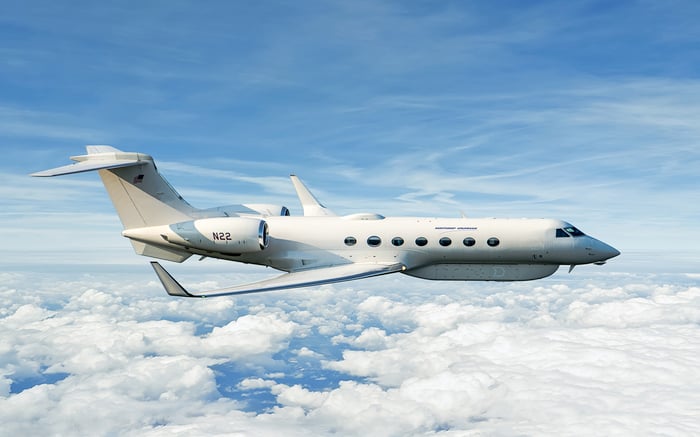 The Air Force argued that the replacement aircraft, which would have been based on relatively slow-moving commercial planes, would be easy targets in a combat theater. The service branch believes a system that links together advanced sensors and radars placed on a variety of air, space, sea, and land systems is a better replacement for JSTARS.

The Air Force's decision faces substantial opposition within the Pentagon, with Army officials in particular keen on sustaining JSTARS for the real-time reconnaissance it provides to troops on the ground. The program is also popular among lawmakers.

A subcommittee of the House Armed Services Committee on April 25 put forward a fiscal 2019 spending plan that would restrict funding for the Air Force's Advanced Battle Management System (ABMS), the array of sensors that the Air Force hopes to use to replace JSTARS, until the Air Force puts JSTARS on contract. In effect, the subcommittee is telling the Air Force that unless it agrees to move forward with the original plan, it will not get the resources needed to develop the replacement.

The subcommittee also balked at the Air Force's plan to retire three of its existing JSTAR aircraft in 2019, allowing instead only one plane to be taken out of service.

Support for JSTARS extends well beyond one subcommittee. Earlier in the week, Sen. Jack Reed of Rhode Island, the top Democrat on the Senate Armed Services Committee, said he was skeptical about plans to retire the planes.

Boeing and Northrop are the biggest potential winners from a reversal

Northrop would be a guaranteed beneficiary should JSTARS be resurrected, as the company last year beat out Raytheon to provide the radar systems for whatever company ultimately wins the aircraft competition. Northrop also has an airplane in the fight, a modified General Dynamics Gulfstream G550 that the company had hoped to pair with its battle management and ground surveillance systems.

Boeing also would have a lot to gain from a JSTARS victory. The company had pitched a military version of its mainstay 737 narrow-body commercial jet, and hoped to use a contract win to launch the 737 into military service. CEO Dennis Muilenburg in January called JSTARS one of several "important opportunities" for Boeing, with Boeing Defense officials hoping that a strong showing by the 737 in the JSTARS competition could help the airplane win future contracts to replace the Boeing RC-135 reconnaissance aircraft and its AWACS sentry aircraft.

Lockheed, which had publicly expressed some skepticism about the JSTARS program before the Air Force announcement, seemed to have the least to lose. The company was also relying on a partner's aircraft, in its case the Bombardier Global 6000 business jet. It also seemingly would be a favorite to win the lion's share of the work on the ABMS system that would replace JSTARS, thanks to its extensive experience integrating radar and computer systems via its Aegis Combat System program.

With lawmakers rising to the defense of JSTARS, it seems unlikely the program will disappear entirely. It's worth noting that the subcommittee said nothing about how many of the new aircraft the Air Force would have to commit to in order to trigger funding for the ABMS system, implying that congressional leaders are open to making a deal.

The bet here is that the Air Force will resume the JSTARS competition and that some number of new planes will be ordered, if only to ensure adequate battlefield coverage while new systems are developed. Even at half the $7 billion price tag mentioned for the full fleet of 17 aircraft, the deal would be a nice win for the company that's chosen. And if the Air Force demands that the eventual airplane be better able to survive in a combat zone, the cost per plane on the compromise could increase significantly.

Resumption of a multi-billion-dollar program would obviously be welcome news for the contractors who get the business. But there is a bigger-picture issue at stake here as well. The outcome of the JSTARS debate, and how the aircraft performs if it is authorized, will go a long way toward determining how the Pentagon will view business jets and commercial derivatives in combat situations for years to come. That, in turn, will help contractors determine whether to use clean-slate new designs or less costly off-the-shelf options for future competitions.

The entire industry is watching with interest to see how JSTARS plays out.